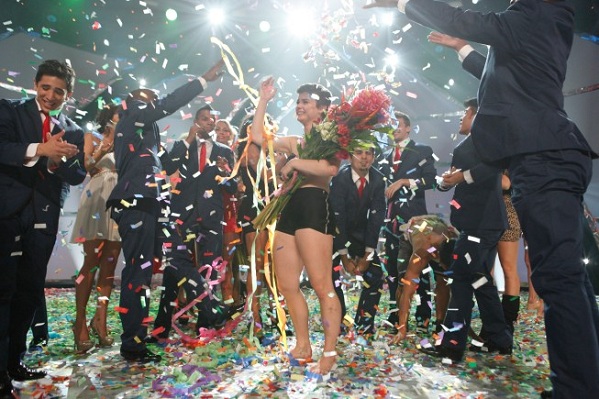 And the winner of So You Think You Can Dance season 8 is…Melanie Moore! Hear what Melanie had to say after her convincing win.

Did you go into the finale knowing that everyone really believed in you and that you could win?
Going into the finale I definitely thought I had a chance, but sitting there on stage next to Sasha, Marko and Tadd I really couldn’t pick a favorite because all of us are so great at the things that we do. I don’t know how America picked!  It was such a hard decision.  I definitely felt confident with what I did on the last show and what I had done in the course of the competition. I just tried to do what I could every week and really focus on the dances that were given to me and not look backward, not look forward, but really focus on what was going on and keep my head in the game.  I didn’t want to put any extra pressure on myself by thinking that I was a favorite or I really had an amazing shot, but I always kept in my head that there was definitely a shot and it was worth going for.

You won with 47% of the 11.5 million home viewer votes.  That’s a huge margin given it was a four-way. Do you know why you had such strong support?

I really have no idea. I was just surprised. Wow. I tried to make sure that my personality really came through in everything that I was saying and I definitely think it had—I always laugh.  I always laugh at myself.  I can never take myself too seriously and I definitely think that came through.  I hope that I’m relatable to people.  I would hope that they see something in me that inspires them to get up and do something.  Maybe that’s why, I don’t know.

You got some pretty interesting offers while you were on the show.  Lady Gaga said she would love to have you on tour.  Kenny Ortega said that you would make a great addition to Dirty Dancing while Nigel said that you could probably join any company that you wanted. Which three of those options appeal to you most? Joining a company, going on tour or maybe getting into movies?

I don’t know.  I feel like my dream has always been to be in a company. My movement would be more suited for a company atmosphere. I would love to do tour work though.  I’ve always said that I want to dance and I didn’t care what I am doing, I just want to be able to sustain a living dancing. That’s really what I’m hoping to do.

Would you like to be in the remake of Dirty Dancing as was suggested on the show?

It’s one of my mom’s favorite movies! I feel like it would be electric to be a part of it.  I have a friend who worked on the Footloose remake, and they said that everyone’s energy was just crazy because everyone knew how great the first one was, so they’re expecting so much from the second one.  It would be so much fun and the choreography would be great because Kenny Ortega is absolutely amazing. It would just be a blast. 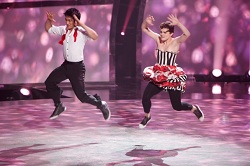 What or who do you attribute your success to?

I feel like the reason why I did so well would probably be because of my partnership.  I had an absolutely amazing partner from the beginning.  Marko was so strong and I feel like we really carried each other.  We fed off each other from the very beginning.  Marko and I put so much hard work in.  We were the only couple who rented studio space outside of the rehearsal time.  We would be in rehearsals all day and then we would go to rehearse at night.  I can definitely attribute my success both to Marko and our work ethics, because without those I don’t think we would have made it as far in the competition.

The fans loved the large leap you performed with Neil in your Mandy Moore number. How do you gain so much trust in a partner in such a short period of time?

Neil and I sort of just clicked from the very beginning.  He’s so funny and he made me feel so comfortable, so when Mandy told me that I was going to be sprinting across the stage and jumping into his arms I wasn’t too nervous. Neil’s got a lot of muscle.  I knew he could handle it.  We started out just a couple of steps away and within three tries I was across the room. We both said ‘let’s keep moving back’. We were sort of daredevils about it.  I feel like whoever I’m partnering with I usually have complete trust in them, because I want them to have total trust in me. What you give is what you receive in that relationship.

What’s going to be on your to-do-list after the So You Think You Can Dance tour?

Right now I’m thinking that I really want to go back to school but major in dance rather than art, just because I’m so inspired and people have asked me about choreography and things like that. I don’t consider myself a choreographer at all.  I can improvise my solos but I’m definitely a dancer right now and not a choreographer. I look up to people like Stacey and Sonya so much. Maybe after some schooling and learning how to choreograph, and a little bit of growing up, I’ll really be able to choreograph. I’m definitely going to be auditioning though.

If they ask you to be an All Star next session would you like to be one?