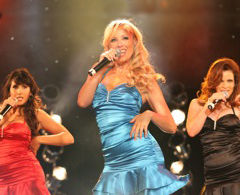 Looking at Shelly Sharman’s resume, you would think she is from a well-connected Hollywood family. She’s performed with Britney Spears, hosts an ‘American Idol’-style show and is a familiar face on TV commercials.  She’s shared a stage with Kylie Minogue, Elton John and Jimmy and receives praise as a choreographer and performer.

As far from spoilt-rich kid as you can get, Shelly is a down-to-earth Aussie who got her big break after a successful audition with Universal Studios Japan.

Gearing up for her newest role as a panel member on this year’s Universal Studios Japan audition, stopping at the Gold Coast and Melbourne in August, Louise Laing caught up with Shelly to hear about her path to fame and how you can wow the judges.

Hailing from Wauchope, NSW, population 4000, Shelly first read about 2003 Universal Studios Japan Audition through an advertisement in a newspaper.  Shelly arrived at the audition well prepared having done her research.

“I was always courteous and polite to other performers and staff working on the door, the sound system, the pianist, everybody. It shows character, and it presents someone that the panel would want to work with,” Shelly said.

“I had a repertoire of songs up my sleeve including 16 bars of an up-tempo and a ballad and I bought my book along with me should they request anything else. I wore a bright blue top to stand out from the crowd. I was ready for change and some traveling!” Shelly said.

Shelly was successful and was cast in the Universal Monsters Live Rock and Roll show. She was offered a 13-month contract that was promptly extended to two years, as new roles in other productions became available as a result of her hard work.

Enjoying her new life in Japan as a full-time professional performer, Shelly took advantage of the many opportunities, especially making contacts with people from the industries from around the world.

At the end of her contract, Shelly worked in Stockholm and London before moving to LA.  There she worked for Universal Hollywood, Disney, signed with MSA, was short listed for WiCKED® and cast in commercials for Cablevision, Yamaha and Kraft.

The panel of judges assess the performers’ skills and attitude and determine the performers’ potential for shows including, WaterWorld, Cinderella or Alice in Wonderland in the Magical Starlight Parade and the stage production of WiCKED®

Shelly has advice for performers auditioning this year.
– Prepare! Research the role you want and know it well. It will be of great comfort when those nerves creep up and you have preparation to fall back on.
– Get organised. Pack your audition bag the night before. Have your headshot and resume ready to go, an ‘audition outfit’ picked out and the necessary shoes and clothing in your bag. Pack snacks to sustain your energy in the good fortune that you are kept all day long! Establish exactly where your audition venue is and make sure you have your public transport route planned out or petrol in your car and coins for parking.
– When you enter the room, ooze vibrancy and a positive attitude. Leave any nerves and doubts at the door.
– If you do not get the response you wish for from the panel, remain positive and consider that this may not be the right place for you at this time. It does not mean that there is no place for you here in the future. Don’t make assumptions or be hard on yourself over an ‘unsuccessful’ audition. Success may not be in the form of a contract.  You will attend many auditions over your career and learning from them WILL make you a better performer if you recognise where to improve!

World Audition Tour Manager, Jaci Testro directs candidates to do research before the audition. “Spend time on Universal Studios Japan’s audition website. It has loads of information, including videos on the shows and roles,” Jaci said.  “Look your best, fill out forms correctly and bring a headshot photo that looks like you. Listen and learn from the panel, be polite and honest at all times, aim high and enjoy the entire process.”

In 2009, over 750 Australian performers auditioned, with 70 making it to the short list and 23 offered contracts. Successful dancers have the chance to perform in front of millions of visitors each year.

Performers must register for an audition time on the audition website.
www.universalauditions.com/japan