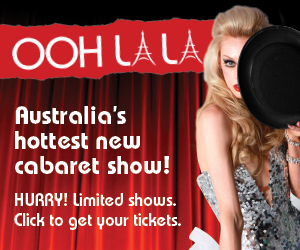 Australia’s own can can cabaret can do.

Take thirty one dancers, singers and acrobats, wed them to a ten year dream and … voila!

Welcome to the red velvet world of Ooh La La, where Australia’s best cabaret show girls return from wowing the world stage to strut their stuff alongside the likes of Rhys Bobridge (of SYTYCD fame) in Todd Patrick’s latest high octane extravaganza.

According to one of the show’s stars, former Moulin Rouge and Lido dancer Alexandra Gray, Ooh La La takes the classic Paris/Vegas show girl cabaret template and redresses it. “It’s a modernised version,” she begins enthusiastically. “Sometimes that stuff can be a bit dated but Todd’s given it more energy and pizzazz. It’s loosely Moulin Rouge inspired but with Todd’s flavour.”

More than that, Ooh La La has given home grown talent the chance to show local audiences why they are so highly regarded overseas. “It’s really great for us,” Gray adds, “because there’s a few of us who’ve been in the Moulin Rouge and to come back here and not be able to do that kind of specialised thing is a bit frustrating sometimes. But this show really gives us the chance to work at home, which is fantastic.”

But is it technically challenging for the dancers? “Not to the point of ballet,” Gray replies frankly, reflecting on her former career. “Quite often these kinds of shows are about the costumes and the grandness of it but I wouldn’t say the same goes for Todd’s show. It is definitely technical but more erring on the side of commercial. It’s like a family friendly show-girl show.”

Given the saucy tradition of the Moulin Rouge, Gray is quick to expand the point. “I would say it’s post-burlesque because there’s a lot of men in the show, which is very powerful, and there’s none of that French topless stuff. It’s definitely sexy; but not in a no children way.”

Although the cabaret revue concept is imported, Todd Patrick has been careful to cast Aussies. “Except for a couple of Kiwis that weaselled their way in,” Gray jokes. ”But hey, we claim them anyway.”

It’s all part of the show’s desire to revamp the style and add an antipodean flavour to the mix.

Beyond that, of course, there’s the dream of taking the concept beyond its premiere run in Melbourne and Victorian regional centres. “This is just the starting point,” Alexandra Gray assures. “There’s discussions all over the place about bigger things. Once everything is put into place and the show is up and running we can definitely see it taking off.”