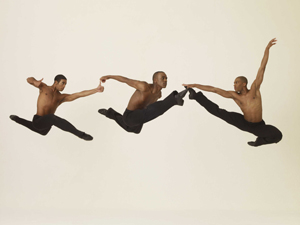 Alvin Ailey American Dance Theater brought their 2010 North American Tour to Atlanta’s Fox Theater from the 18th to 21st of February.  Friday night’s program highlighted the best of 20 years of Judith Jamison’s artistic direction.  The three act performance indulged the audience with hallmark images honoring the Company’s overarching philosophy “to promote the uniqueness of the African-American cultural experience and the preservation and enrichment of the American modern dance heritage.”  Jamison was appointed Artistic Director of Alvin Ailey American Dance Theater in December 1989 at the request of her mentor, Alvin Ailey, who personally chose her to succeed him before his untimely death.  Her steadfast commitment to maintain Ailey’s philosophy was paramount throughout the evening.

The ballets of the first two acts (not including In/Side) were excerpts restaged by Masazumi Chaya, with the exception of North Star which was restaged by Ronni Favors. The surprisingly seamless format honorably captured the essence of the complete works.  The quick pace of the program lent a palpable anticipation to an evening that despite its dabbling in so many eclectic performances from Jamison’s 20 years of direction justified Alvin Ailey American Dance Theater’s reputation for virtuosity in concert modern dance.

Revelations was performed in its entirety as the evening’s third act.  This familiar journey was a wonderful tribute to the company’s roots.  The dancers’ authenticity of emotion, reverence, and raw skill are showcased in this work created by a 29 year old Ailey in 1960.  The “Blood Memories” he drew upon to create this popular and critically acclaimed work strike contemporary resonance, making Revelations the cornerstone of this company and as poignant as ever.

The 2010 Alvin Ailey American Dance Theater North American Tour showcases the past while setting the stage for the future.  What a thrilling way to honor Jamison’s 20 years of Artistic Direction.