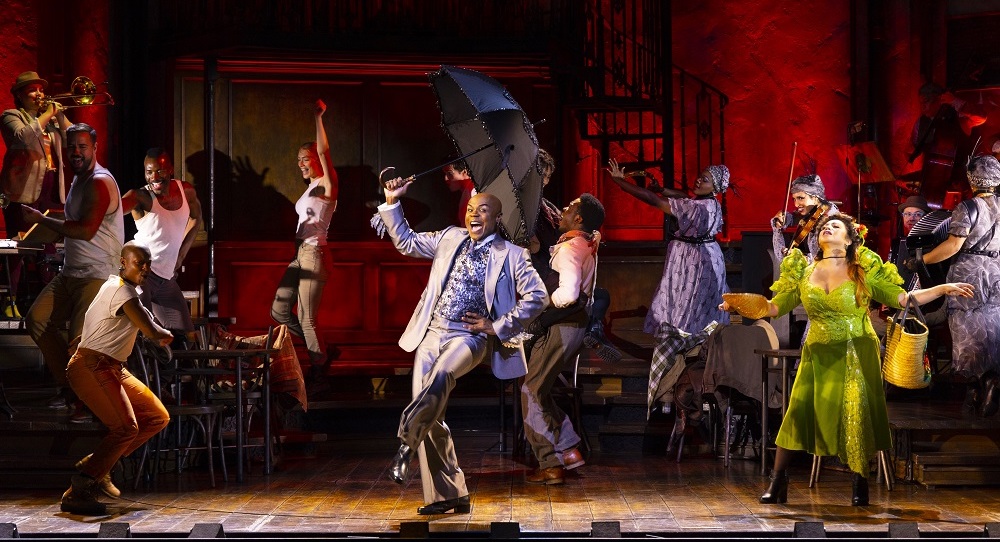 Hadestown, the winner of eight 2019 Tony Awards®, including Best New Musical, and the 2020 Grammy® Award for Best Musical Theater Album, has arrived at Atlanta’s Fox Theatre. The acclaimed new musical is written by singer-songwriter and Tony Award® winner Anaïs Mitchell and developed with director and Tony Award® winner Rachel Chavkin. Hadestown marks the first time in over a decade that a woman has been the solo author of a musical: writing the music, lyrics and book, and is the fourth time in Broadway history a woman has accomplished this creative feat.

As an Atlanta native, any opportunity to visit the “Fabulous Fox” is a treat! This visit certainly did not disappoint. The energy of the audience was contagious, as so many gathered for a trip to Hadestown. From the opening number, to curtain call, we were invited into an intimate storytelling. The set was minimal, and allowed the cast to showcase their artistic talents. Musicians were strategically placed onstage, providing the audience a rare glimpse into the music-making magic of Broadway.

Hadestown follows two intertwining love stories — that of young dreamers Orpheus and Eurydice, and that of King Hades and his wife Persephone. It is based on the ancient Greek myth of Orpheus and Eurydice, and Hadestown’s success proves the timeless nature of this story. In this telling, Hadestown is run by wealthy businessman, Hades. He operates an underground factory safe from the weather and famine above, though manned by workers facing never-ending labor. Despite the love Eurydice and Orpheus share on earth, Eurydice, desperate for safety and security, agrees to descend to Hadestown forcing Orpheus on a rescue mission to the underworld.

The January 10 performance, showcased the strength of understudies. Courtney Lauster stepped in as Eurydice. Her deep emotive abilities and vocals that ranged from sweet songbird to powerhouse captivated me from start to finish. A recent graduate of Missouri State, she is certainly one to watch. Will Mann stepped in as Hades. Truly embodying the villainous role, Mann carried the character tremendously.

Additionally, Chibueze Ihuoma’s performance as Orpheus, was simply breathtaking. Ihuoma portrayed Orpheus’ wide-eyed innocence in a resonating manner, and the way he carried Orpheus’ ethereal melody displayed the power of a song. A recent NYU Tisch graduate, he is another to keep your eye on.

While Hadestown may not have traditional flashy dance numbers, the choreography was critical to moving the story along. A turntable onstage, as well as lighting, added an intensity to the movements and scenes. The driving rhythms of “Wait for Me” was a definite standout for choreography, incorporating swinging lamps which seemed to join with the dancers’ movements.

Hadestown invites audiences to “Come see how the world could be.” Theater provides an escape from the hustle and bustle of everyday life, and for two-and-a-half hours, I was able to press pause and “See how the world could be.” It’s been a long-time since I was so emotionally moved by a Broadway performance. If you have the opportunity to take a trip to Hadestown, I promise you won’t regret it!

Playing as part of Regions Bank Broadway in Atlanta’s 2022/2023 season, the Atlanta engagement of Hadestown will play January 10-15. For further information, visit www.hadestown.com.