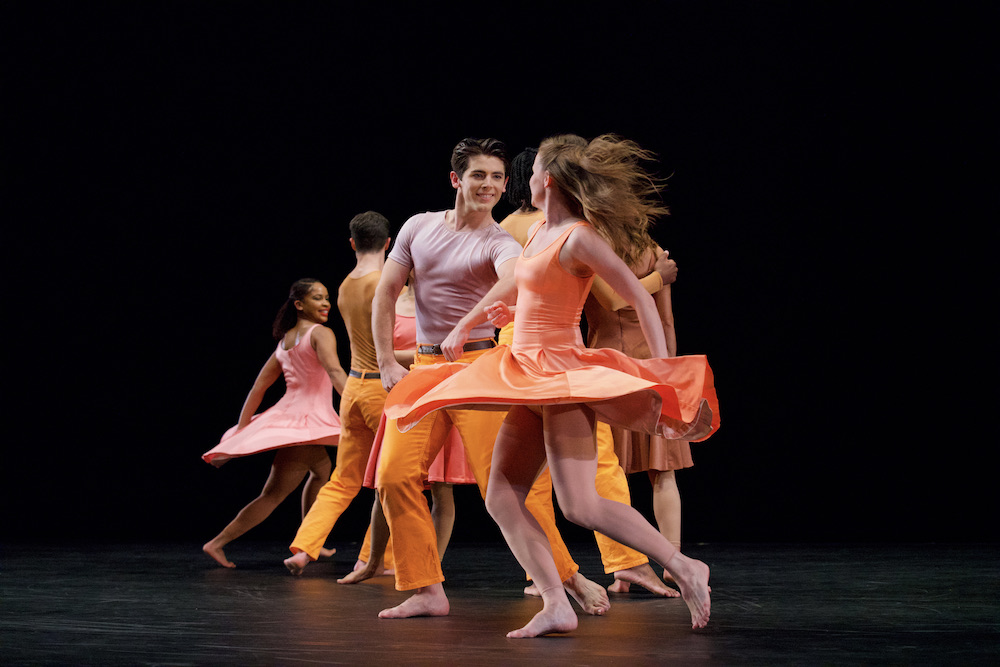 Paul Taylor Dance Company, under the direction of Michael Novak, presented various programs comprising Taylor: A New Era at the Lincoln Center from November 1-13, 2022. The Taylor company is working to define itself after the passing of Paul Taylor in 2018 and the COVID-19 pandemic that so heavily impacted the arts, and especially dance. According to the director, attending audiences discovered “some wonderful new Company members performing many of Paul Taylor’s greatest dances and new Taylor Company Commissions, in addition to a unique new collaboration with Orchestra of St. Luke’s. My goal is to give audiences new ways to experience the Company by exploring the relationship between dance and live music and reminding them of the power of our vast repertory and the importance of new work.” The November 3 program consisted of Scudorama by Paul Taylor, Somewhere in the Middle by Amy Hall Garner and Esplanade –– another Taylor piece.

Scudorama was first performed in 1963, and the program notes were a quote from Dante: “What souls are these who run through this black haze?” / And he to me: “These are the nearly soulless / Whose lives concluded neither blame nor praise.” The piece features a variety of colorful costumes –– mostly unitards with street clothes making occasional appearances –– but the colors and shapes feel like they are supposed to symbolize something that doesn’t quite break through. Multicolored, blanket-like objects also feature in the piece and are sometimes worn by the dancers, again with no clear meaning attached to them; at one point, they are slapped against the floor repeatedly and the dancers do not attempt to hide the effort that this gesture takes. From intense walking sequences to creaturely crawling, from bouncy, musical phrases adorned with flexed hands to grounded petit allegro punctuated by a generous number of pas de chats, the movement vocabulary is diverse. So diverse that everything feels a bit random. The movement is not quite as coordinated with the music as I’d like it to be nor does the dance fully keep up with its energy. I’m left wondering: what (or who) is all this drama for?

Somewhere in the Middle was a world premiere featuring the music of Count Basie, Sarah Vaughan, Duke Ellington, Wynton Marsalis and Bill Evans. The piece’s choreographer, Amy Hall Garner, is resident choreographer at Carolina Ballet, has coached Beyoncé and has wide-ranging choreographic experience. The atmosphere is fun and jazzy, and paint blotches lower and lift from the ceiling, the color palette shifting with the various sections of the piece. The choreography is very musical, and the movement is flirty and athletic, though I don’t quite believe the coquettish relationships that are built into the partner work, which is one of the weaker elements of the piece. Although the dance isn’t perfectly clean, the groupings of dancers switch seamlessly, and the costumes and set design are very cohesive. The dancers smile throughout, and the piece culminates in a full group unison phrase as all the paint splotches drop back down. The frontal orientation of the piece along with the costumes and choreography’s dependent relationship with the music makes Somewhere in the Middle feel a bit like a competition dance with high production values.

The final piece of the night, Esplanade, was first performed in 1975, and is set to Bach music. The movement is highly dependent on stiff-chested low runs, dramatic reaches, weaving patterns, catch steps and canons, and the piece almost feels like running through a field, though I wish the movement was even more thrown and carefree. There are big running entrances with slides out of jumps, whipping back attitudes and some floorwork. The highlight of the piece is a duet in which a female dancer dances standing on top of a male dancer who is lying down –– I wish that idea was explored more, went further and lasted longer. Baby cradle lifts are the most prominent movement motif, and the piece ends with the dancers taking huge leaps into each other’s arms, more trust dive than trust fall. As with all the pieces in the program, I waited for Esplanade to build, but my anticipation was not rewarded.