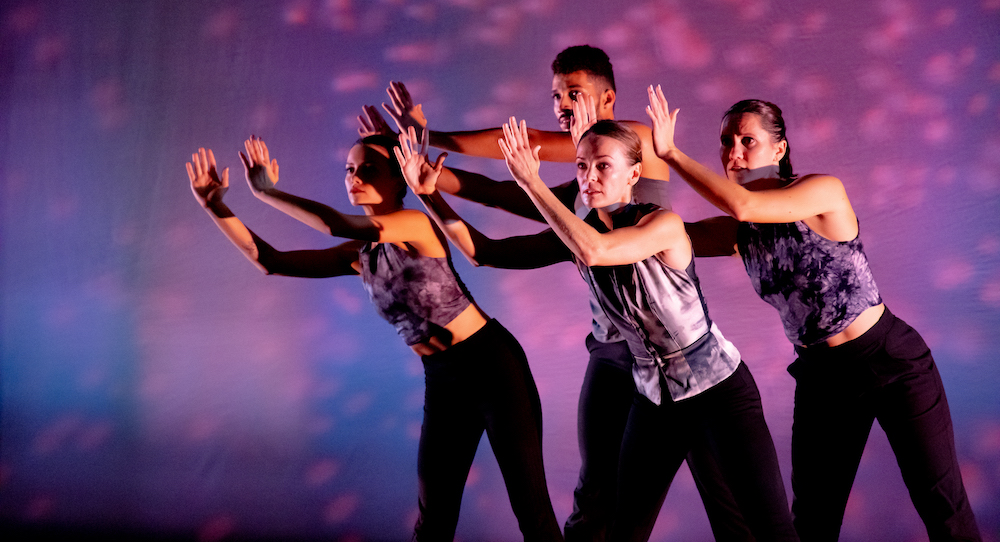 First impressions can come into question as we learn more and reflect further – and that’s exactly what happened for me as I took in Island Moving Company (IMC)’s 2022-2023 Season Opener Points of Departure. Each of the four works in the program spoke a certain meaning to me when I first saw them. When I went back and read program notes, however, I realized that how the works resonated with me was fully separate from the artists’ intended meaning.

Rather than confusion or disappointment, I was intrigued and excited to see these works in a whole new way. This dynamic in no way signals any sort of “failure” of these artists to translate their vision to audience members. Instead, it exhibits subtlety and space for audience members to conjure their own vision of the works. That’s one thing, among others, that keeps art exciting and multifaceted – personal yet universal.

The program opened with the world premiere of Colleen Cavanaugh’s She Flew Away. The work offered a fresh take on a dynamic common to many concert dance pieces (not to mention our lives): the individual and the collective, the desire to connect and to follow one’s own truth. Only later did I learn that the piece was dedicated to Dr. Marlene Cutitar, “healer of many and a giant in the medical community who will be missed by many,” (program notes). As such, the soloist Kelly Moeller Rabe seemed to represent this person — moving fluidly with the group, but also at times standing out in her own remarkable ways.

That theme of the individual and the collective began to build from lights up. Two clumps of dancers stood in the background, offsetting Moeller Rabe in the foreground. As they all began to move, they took risks yet maintained soothing ease. That quality of risk-taking, yet serenity continued through following sections – with new members of the ensemble entering and exiting, and various personas finding new relationships in space.

Cavanaugh’s movement vocabulary smoothly shifted from the linear to the serpentine, and even the linear didn’t fall into stasis. Smooth transfers between unison and non-unison movement were just as fluid. I did wonder if the stage might have been visually clearer if formations took up more space. Yet space constraints on a stage can be quite a challenge, and tight formations could have been what Cavanaugh was going for: a fiery density of movement in a tight area.

I also saw moments of dancers supporting each other’s weight – such as easing a lowering to the ground. Learning about the dedication of the piece, I saw this choice in a new way: of healing and nurturing the suffering. Through it all, Moeller Rabe kept coming back – thus becoming a central character. She exhibited an ability to use her length and strength without overdoing anything; her movement demonstrated a wise understanding that less can very much be more.

To end the work, the ensemble circled around Moeller Rabe – but she didn’t stay inside for long. She moved outside it, weaving in and out until she finally danced offstage. The group looked toward where she had gone, but she was just that – gone. When we truly find us, sometimes the group will look to us, but we’re not there. We’re on a whole different path, the only one for us. Yet, once again, such an exit certainly meant something different to me after I read the program notes. Life after we’ve left this earth, whatever it may be, is its own sort of new path.

Nasinnya – Seeds, from Francesca Genovese, came second in the program — a work of primal beauty and a unique movement aesthetic. Under dim lighting (lighting design by Stephen Petrillo) – almost such that they were in silhouette – dancers in long skirts stood facing the back. The work took its time to open, an approach I generally find quite pleasing and effective (and certainly did here). The ensemble moved slowly, with sincere care toward every joint articulation and small movement pathway. Their speed and energy slowly rose as the work progressed, but their movement remained just as mindful and intentional.

There was even something ritualistic and ancient in how they moved together, their spirits lifting up in a prayer of movement. As part of that energy rising, they even spun like Whirling Dervishes. The backdrop also changed, yet continued reflecting the natural world – with shapes reminiscing big leaves of tropical forests.

Movement was full of circularity and long limbs extending spaciously – evoking the harmony and interconnectedness of the work’s natural imagery. While the piece was largely non-narrative, certain moments were light-hearted and sweet – such as one dancer leaping and exiting on a confident little laugh in the score (“I came, I danced, I conquered”).

The piece’s energy did ease at one point – the energy settling after it had risen. It picked back up for a few ending sections. I did enjoy the vivacious of the piece’s ending as it was, and the reprise of the skirts from the beginning (which the ballerinas dancers had shed in the midst of the piece).

The exact nature of this “full-circle” moment wasn’t fully clear to me at that point, but an enjoyable full-circle it was nonetheless. Aesthetically, energetically, and kinesthetically, the primal and natural world of this work was a fascinating and gripping one to visit for all-too-short of a time.

Then, reading the program notes later, I learned that the piece was inspired by a story about a Ukrainian woman who gave sunflower seeds to invading Russian soldiers, so that they could “leave something beautiful behind.” As such, the piece exhibited and celebated elements of Ukrainian art and culture (from embroidery on those long skirts to the score from the Ukrainian musical group DahkaBrahka).

This knowledge gave the piece a whole new emotional weight to me, that of a people fighting to live freely and fully. “Have hope – anticipate beauty,” affirmed the program notes. Indeed! Even without direct reference to the invasion of Ukraine, the spirit of that statement leapt off the stage throughout the work.

Tania Pérez-Salas’ Run/Echo (another world premiere) cogently teased at borderlands: of staying and going, of belonging and not belonging. Dancers formed lines, which soon rotated like pinwheels. A couple of dancers weaved in and out – almost as if trying to penetrate into whatever this collective was. The silhouette of a tree filled the backdrop behind them.

It all felt perfect for the “spooky season” of October – almost as if those two dancers were trying to break into a mysterious old house under a full moon while trees lost their leaves (and the scary movie continues from there). Only later did I read (again, in program notes) that Pérez-Salas’ intention was to present “different points of view about borders and migration.” Though, theoretically speaking, devices allow us to be more connected than ever before, “the free movement of people is far from becoming a reality because the walls tend to grow every day.”

Yet, sometimes those walls break; the pinwheel formation broke, and dancers found their own movement. One (Raum Aron Gens-Ostrowski) began to speak: stream-of-consciousness, full of doubt (self- and otherwise). Later, the ensemble joined him in speech. Speech is used in contemporary dance, though not all that often – so it can be intriguing when choreographers incorporate it. Many dancers also report feeling trepidation about using their voices onstage. If this ensemble had any of that, they didn’t show it.

In the idea of borderlands, these statements also reflected deep uncertainty – the space where dueling thoughts in our mind meet and then push, pull us in different ways. The speech also successfully deepened the mystery and the psychological quality at hand. Pérez-Salas created tension between opposing aesthetic elements, which served to enhance that psychological quality yet also keep aesthetic and structure pleasing: undulating spinal release and classical lines, improvisational non-unison and clean movement phrasing in unison.

As another satisfying contrast, dancers found memorable moments of quite internally-directed movement, but also danced expansive and explosive movement in unison sections. Between moments of fear, of uncertainty, of perceiving danger, there are also times when we can surprise ourselves by our own courage and daring to take up space. I saw such thoughts – and thoughts that the dancers had spoken aloud – mirrored in movement in those ways.

Almost as if as a climax, of a horror film or Stephen King novel, the movement became even more energetic and frenetic towards the end. The pinwheels formed and unformed. Borderlands shift and change, get propped up and broken down: such is a central part of human story, a timeless dynamic that Pérez-Salas portrayed compellingly in this work. With or without her direct intended meaning, I experienced the piece as one full of intriguing tensions, gray areas, and aesthetic mystery – and thus took much away from it far past when the lights went down.

Closing out the program was IMC Artistic Director Danielle Genest’s City: full of striking celestial imagery and Genest’s signature movement, both vibrantly dynamic and inwardly attuned. Points of light populated a blue background, punctuating like stars. Later, reading the program, I learned that Genest intended to “explore the tidal nature of communities – constantly changing and shifting with time.”

This joining of the celestial imagery and people in community fascinated me; we’re all stardust, after all, as Joni Mitchell sang. In a perhaps less heady interpretation, those punctuating lights could be received as bright city lights. Indeed, Genest’s movement had as much electric action and variance as a buzzing city.

In both faster and slower movement, the ensemble maintained satisfying (and commendable) continuity. Rippling spines in contractions towards the stage floor – releasing with exhales – juxtaposed clean, classical lines – lifting with inhales. A few particularly evocative images in movement also stuck with me. As one, a dancer turned as they lifted another overhead: reminiscing a constellation or spinning galaxy.

As another, dancers Margot Aknin and Emily Baker joined one hand in one hand, reaching their other arm in the opposite direction. They pulled in opposition, on relevé (heels raised) — divergent forces creating balance. That’s an effect mirrored time and time again, and which keeps all living things in health and harmony. Also reinforcing harmony and natural order, formations and pathways across the stage were clear, yet also fluid and supple.

Also poignant to me was the ensemble’s lifted energy and upwards gaze, at many points, as if they were looking up at the majesty of the night sky in enraptured wonder. How people live together in large communities, on their separate paths but sharing space and the fruits of community, is arguably just as wondrous. These moments were also a reminder that the seemingly simplest choices can resonate with the most meaning.

In an evocative ending image, the lights came down on an ensemble lifting up two dancers. There was yet another meaningful reminder here: don’t forget to look up in wonder. What we might see in a work of art can differ from what the creator intended, but both can hold wonder. That’s the magic of art: so much can be true, so much can be possible.

We can share something with many other people, yet have a totally unique experience of it – finding our own “points of departure.” Thank you, IMC, for reminding us of that, for offering us the space to share art yet nevertheless experience it as our own.