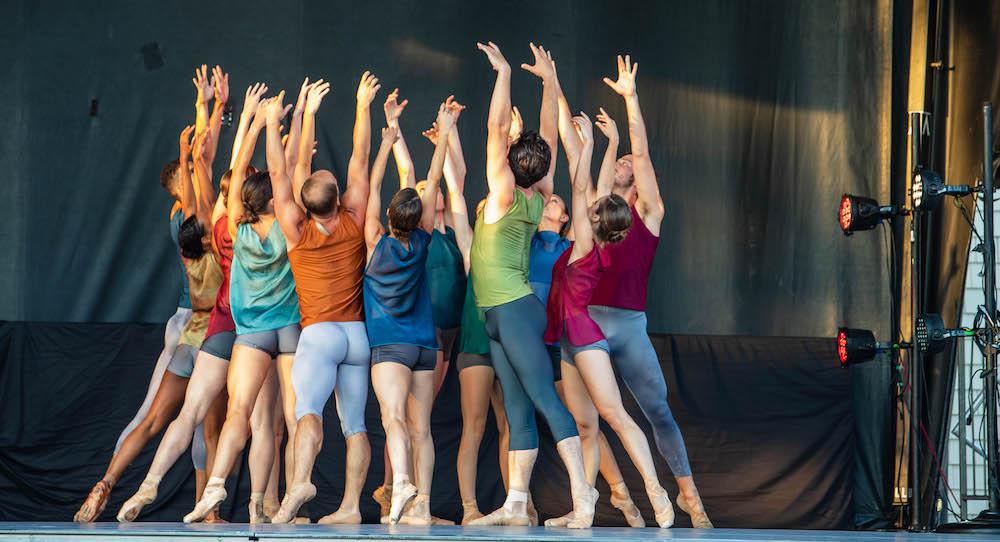 People spread out in front of a stage, across a lush, large lawn, some with food and drink at the ready – is this a summer music festival or summer Shakespeare? No, it’s the Newport Dance Festival: an annual gathering of artists from around the country, and the world, in the spirit and mission of creative exchange. Another key goal of the festival, and (all signs point to) tangible impact of it, is wider accessibility to dance; it offers a casual atmosphere that can feel more welcoming to many modern audience members than can a proscenium theater.

2022’s festival demonstrated many emerging values and trends of today’s dance world, but also roots in the sorts of concert dance traditions and perspectives that do work. The festival has become a tradition of its own, one that reflects how the dance world is growing with the world around it – a new tradition of intellectual and artistic exploration, adaptability, and wide accessibility to the local community. It’s dance that we can all share, and even help shape.

Coming second in the program was Khambatta Dance Company’s Endangered Species (2018), with choreography from Cyrus Khambatta with the dancers – a work with a wide palette of movement as well as resonances of memory and human connection. A mysterious atmosphere filled the work’s beginning, a foreboding score and intriguing partnering rising as the momentum in the air grew.

Something more groovy began to grow as a new beat dropped, and movement took on a new spirit of exploration. Dancers spinning in star shapes in the air while lifted by partners, flexed feet and arms undulating like seaweed: this was not your grandmother’s ballet! Movement even took on a playful quality, with structured repetition reminiscing games and shaking shoulders evoking laughter.

Also enjoyable were ebbs and flows of speed and strength in movement quality, allowing all of these qualities to fill the air with even more clarity and dynanism. On offer – in terms of movement vocabulary and movement qualities – was everything but the kitchen sink, as they say.

A more mysterious atmosphere returned with a memorable duet. Also arising was a dynamic push and pull between flight and grounding, of rising in hope and then settling again. One dancer was overtaken physically, even stood on, yet she soon stood to raise her heart to the sky. Rising in hope, indeed!

The ensemble returned, connecting hands and placing hands on shoulders to create support. Playful slides harkened back to schoolyard games once again. Earlier in the piece, part of me wanted something that could thread together everything in that wide palette of movement, to make it all cohere more. In this ending section, I saw that thread of cohesion in this movement of childlike connection and playfulness.

To end, the dancers looked up and raised their heart to the sky – a moment full of hope and promise, as caregivers often have for their young ones with all of the years ahead of them that they have to live. The connection of souls in movement here also made my own feel lighter.

Following that piece was Island Moving Company (IMC)’s premiere Intrepid (For Miki), from incoming IMC Artistic Director Danielle Genest – a work of both strength of softness, of daring risks and the comfortably familiar. The work came out with a true bang, energetic movement meeting the bright colors onstage (violet, navy, red, orange) to create a buzzing vibrancy. Dancers moved separately at first, finding individuality and delighting in their unique movement strengths.

They joined together in unison before too long, the power of their movement becoming more than the sum of its parts. In both of those sections, movement was audacious and unconventional. The dancers also moved through formations that felt pliable and moldable, yet firm – like clay. Something beautiful was emerging from that clay, as Michelangelo might have seen.

All of this brought forth a force of a group of souls: capable of unity but also standing strong in their own truths. These individuals were also adept at an ample array of movement and ways of being in movement; they returned to movement vocabulary that they had moved through before, but now danced it at a quarter of the speed. With a new score (music in the piece from Max Richter and CO.AG), the mood grew into something more bittersweet – lightness and hope blending with tender, sometimes somber moments in partnering.

As something that I’ve loved to see more and more lately, in this section women lifted other women (within reasonable bounds of safety, we’re strong enough!). That added to the sense of courage and fortitude in the piece, deepening again with an ending section that took on more speed and rhythmic accent. The ensemble created shapes that left room for light and energy to move in and around them. In the wider stage picture, dancers stood in closed formations, but which also let light and energy weave through. Hope is a foundation, and also a muscle to be exercised, I thought here.

IMC pre-professional Summer Intensive students danced next, in Louise Chapman’s jazzy, classy Blue Ronde à la Turk. The ensemble moved with satisfying style and ease to the trills and tones of the score’s instrumentation (from Dave Brubeck). They danced with harmony and kinetic understanding, as one united group. Yet, as a compelling structural development, one dancer later broke from the group and strutted her stuff – with queenly confidence and a smoothly snaking spine. The rest of the ensemble moved in duets, ballroom and Latin dance movement peppering what they shared.

Overall, the movement was stylistically rich and diverse – with a plethora of influences all fair game. I smiled to myself to think about how these budding pre-professionals were dancing such a stylistically lush and varied movement palette. That’s emblematic of the concert dance field that these dancers are moving into – moving into with commendable artistry and artistic maturity, I’ll add. The piece ended with that one dancer standing tall while the others rested right on the stage – her fierce self-sufficiency shining brightly.

Next came East Coast Contemporary Ballet’s Shades of a Soul (2022), by Alejandro Ulloa. The work offered a clear world of its own through thoughtful design and wonderfully theatrical movement choices. As part of that world, the ballerinas wore “Can-Can” dresses (costumes from Nicole Elaine) as Edith Piaf-era French music played. They moved with a touch of Nutcracker Ballerina Doll’s comedic robotic quality, but also the contract and release of more modern and contemporary movement influences. The old and the new were meeting and meshing, to create something wholly fresh and original – and also quite lovely.

This La Bohème world of classic France, classic but painted with contemporary colors in choices of movement and structure, only became more vivid as the piece progressed. Separate sections – of varied duets, trios, and larger ensemble sections – felt like chapters in a storybook depicting this world. It offered a smorgasbord of emotion and human interaction: the tender, the comically awkward, the somber, the joyous.

Gesture, as well as conscious choices in more expansive movement vocabulary, supported this theatricality – making it something clear but not literal or heavy-handed. Whether movement weighted in order to embody the somber mood at hand, or physical comedy that harkened all of the way back to the same in the silent film era, Ulloa’s choreographic choices drew from many different schools of movement – and employed what would best serve the action and atmosphere at hand.

The ending sections built a feeling of grandeur and resilience. The ensemble moved together, with pride – strength lying within the communal support at hand. Right in line with that ethos, the work ended with a memorable lift of easeful flight. The remaining members of the ensemble simultaneously created a tableau reminiscent of an illustration in a classic picturebook – one of many such illustrations in movement that the piece offered. The work felt like part celebration of the French music of this era, part exploration of what could be created with it in movement. Whatever it was, it brought me right into its milieu for a thoroughly enjoyable visit.

Closing the program was Miki Ohlsen’s Hora Cero, Don’t Look Back (1998) – which offered another vivid world capable of taking me right in: a big tango party massaged into concert dance (or the other way around, one could argue!). Dancers wore red and black, matching the red and black drapes hanging on the backdrop. Tango music filled the stage, and then permeated outwards to the lawn before the stage to meet the audience.

Latin dance vocabulary, blended with Ohlsen’s unique flavor of contemporary ballet, further brought this lively tango world to life. The dancers moved with the confident carriage and classy sensuality of tango at its best. A solo of one woman dancing in her full strength and pride offered a pinch of a more modern gender ethos to this classic tango world. Further sections, of varied numbers of dancers, offered additional little stories within the larger story of this tango milieu.

One slower, more reflective trio towards the end had me thinking it’d be the end of the work, but a frenetic, lively ensemble section followed to close out the work. I did wonder if that less vivacious trio might have been a more satisfying end to the work (less can indeed be more, in dance and beyond it) – yet Ohlsen had more in this story to tell, and in its own right it was wonderful to experience.

Moreover, this being the last performance run with Ohlsen as Artistic Director, it felt touching and memorable to have such a vibrant work of hers close the program. All in all, the work afforded the stylistic richness and construction of clear worlds that works throughout the program offered – in some ways rooted in concert dance traditions, in some ways stepping forward into the art form’s future.

In being part of the experience of the Newport Dance Festival, artists and audience members were all part of that dynamic dance of the old and new – new traditions to carry forward with us growing out of that meshing and mixing. The sun set as this program progressed, yet new beginnings are possible as we nurture and shape this art form that we love.