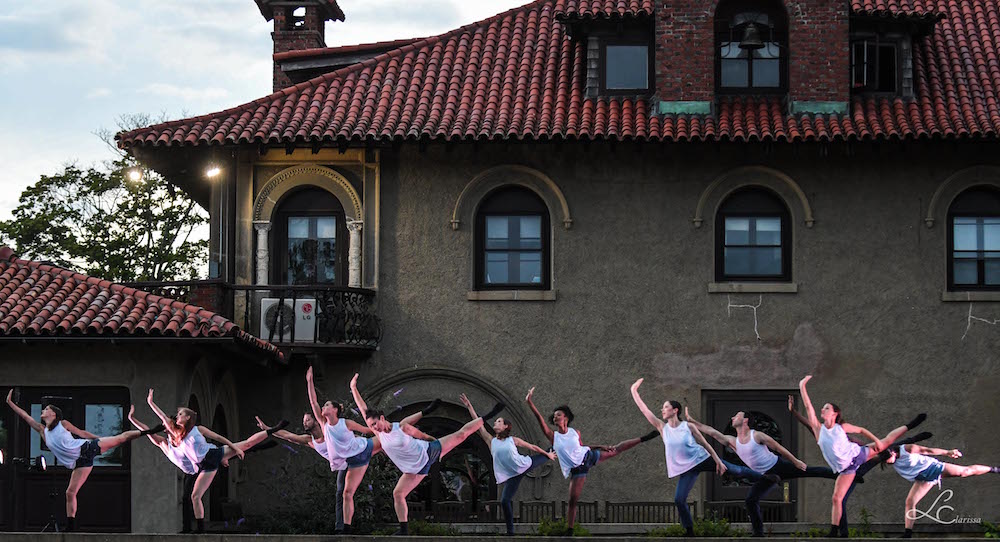 It could be easy for dance artists and organizations to remain isolated, to work feverishly at cultivating a repertory, while also working to maintain the resources needed to do so. Yet dancing together allows for sharing of energy, ideas and resources. Island Moving Company (IMC), based in Newport, Rhode Island, has demonstrated that it understands this through producing the Great Friends Dance Festival.

For the past nine years, the festival has brought together contemporary and contemporary ballet artists for five days of dance-making and performances. Performances are typically held in the Great Friends Meeting House, a Quaker meeting house dating back to Newport’s origins (the name of the festival thus holding a bit of a double-meaning). Yet this year, because of structural issues, performances took place outdoors – on the lawn of St. Michael’s Country Day School (also in Newport). 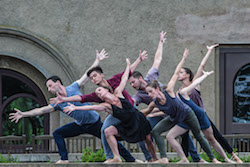 Saturday’s show began with an “Étude”, the fruits of an ambitious effort to create a dance in an afternoon (which dancers could elect to participate in, on any day of the festival). This night’s Étude came from Staycee Pearl, whose company, Pearl Dance Project, partnered with IMC for the festival. Other artists choreographing Études during the week included Rodney Rivera, Carolyn Dorfman and more.

Costumes were pedestrian clothing, stretchable enough to dance in. This (perhaps practically unavoidable) choice began a raw, unpolished feel appropriate for the in-process nature of the piece. Electronic beats had an African tonal feel and rhythm. A transitioning between, and balancing of, grounding and upward lift was a continued movement theme. Gaze was also key – to particular locations on stage, toward other dancers. A powerful ending of walking off confidently spoke pride in presenting this in-process work, and in partaking in the process that created it.

Thomas/Ortiz Dance’s work Un-damely came next. The five dancers wore white bodices and skirts, implying an element of purity. Formations were clear and crisp, beginning in circles and moving to lines and then alternating between the two. Movement signatures and motifs had a nice way of diversifying and individualizing the classical ballet idiom (which was also quite present, such as in turns and extensions). These signatures included a wrapping in and unwrapping of one arm in from a classical port de bras, as well as arabesques from flat back. Another wonderful moment was a leaning away through the torso, while legs stayed stable in a second-position plie. This spoke to finding a level of independence from a stable base of communal support. 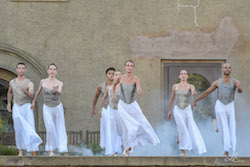 While all of this that felt pleasing to me, I wanted something more – based on the program description of “five women revolt against gender conformity, expanding the notion of femininity” (and Ortiz’s matching description in a short pre-show talk). I wanted to see in the movement more rawness, more groundedness, perhaps even occasional loss of control to regain it. Torso undulations gave a tiny taste of that kind of physical rawness. Halfway through the piece, the dancers took off their skirts and laid them aside, to reveal pantaloons that were underneath. Applying such raw qualities after this point could have worked well structurally and thematically. Perhaps this movement could have increased size and speed of movement to convey passion. All in all, however, the piece was memorable and thought-provoking.

Rodney Rivera’s Marionetas came first after intermission, danced by IMC dancers Glen Lewis, Tara Gragg, Shane Farrell, and Emily Baker. Gragg and Farrell were in black suits and white shirts, offering a magician/performer feel. Baker and Lewis wore slacks and shirts in earth tones. The relationships between them was clear right from the piece’s start – Farrell was behind Baker, and Gragg behind Lewis, miming holding them up (Lewis and Baker’s arms hanging from the elbows, limp). The puppeteers were in control of their puppets.

Just like this concept, phrasework was quite striking and inventive. Asymmetrical, off-balance weight shifting moved from poses. Slow, controlled “fall and recover” conveyed connecting and disconnecting, such as opposite shoulders meeting in an inward lean toward another dancer, to then rise to vertical again. Turns such as those of a tilted torso and 60-degree held extension were visually captivating, and fit in well with the feel of the piece’s movement – slightly off-kilter, agitated and unique. In some ways, it felt like a Tim Burton film in real-life dance.

Throughout was a tension of the puppets finding and losing autonomy, to finally be back as puppets completely without it by the end, in the same formation as the piece started. This dynamic was not one of aggressive vying for power, but rather an exploration of relationship between leader and the led. In this piece, that felt satisfying, likely more satisfying than a “power-play” narrative would have been.

Donna Salgado’s CONTINUUM Contemporary/Ballet took the stage second to the last in the night, with Gabrielle Lamb’s Everybody Here? A score from Paul De Jong was futuristic but upbeat and pleasing, rather than somber and atonal. An opening of the score was a phone call that could have been from a credit card company or collection agency, bringing, in contrast, a touch of fear and certainty. Later, an auctioneer rattled off in auctioning voice.

Costumes were polished and stylized versions of pedestrian clothing, setting in place a realistic feel. All combined, these were people engaged in this capitalistic society of burrowing, betting, gaining and losing. Inventive use of space spoke to authentic human connection, and the gaining and losing contact with it, even within these cold realities of capitalism. 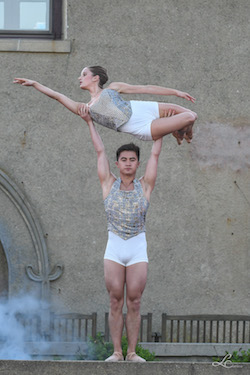 For instance, some rose to higher levels as others were lower, and they swayed side to side at these different levels – moving closer and farther away from each other. Supple, wave-like arm motions contributed to the energy of spatial tension that these phrases created. Phrasework was crisp, clear and digestible. I did wonder, however, if these dancers could be pushed more technically. It seemed like they could all do even more advanced turns, leaps and footwork.

I believe Lamb has the capability to include this more athletic, rigorous movement and maintain the intriguing, unique qualities of the phrasework already in the piece. Perhaps this was all purposeful stylistic choice. Even so, it was a pleasing work, all considered – part of the plethora of styles and approaches present in the night’s performance.

IMC and its “great friends” demonstrated that such creative gifts are possible when dance artists and companies come together to make and present work.