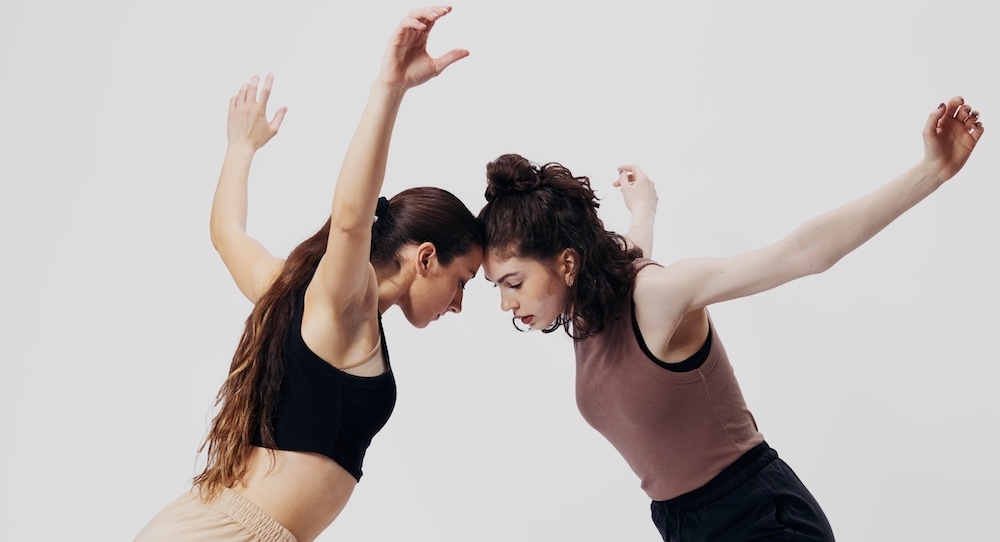 I took my seat to take in Rhode Island Women’s Choreography Project’s 2022 program, and browsed the QR code program (saving trees – great!). Co-Founder Melissa Wong shared the Project’s mission statement: “to nurture, elevate and empower artists whose voices are not traditionally heard. The Project serves any choreographer who feels underrepresented regardless of their gender identity.” Wong ended with, “That’s a mouthful!”

Someone from the audience said, “You’re doing great!”, and laughs rang through the intimate black box space. From behind my mask, I breathed easy in the casual atmosphere. Kristy DuBois, another co-founder, described the organization’s three-week residency structure and collaborative, intensive spirit of creating (and also that the organization just received 501c3 nonprofit status – amazing!).

I was struck by the breadth and wide inclusivity of all these values and ways of working, and also how highly attuned it all was to the social mores of 2022. The works to follow in the program were just as attuned and keyed into such beliefs, as well as contemporary interests – and, furthermore, reflective of the boldness and stylistic multiplicity of today’s dance world.

These works were from eight choreographers who identify as women or non-binary. As another very 2022 structural choice, we audience members got to hear directly from many of these dancemakers before experiencing their work – so we could then place the works alongside those voices to get a clearer, fuller idea of both.

In addition to the works described at length below, the program included Jun Ukita Shepard’s vivid, lively Second Mover, a work delving into the dynamics of the “second mover,” the idea of a second actor’s impact on reaching a desired outcome (an idea inextricably connected with addressing climate change on a large scale, it was clear from from Shepard’s introduction); and Liana Weisbord’s Nerve, an intriguing depiction of how the human “rest/digest” and “fight/flight” systems work, in conjunction and apart (a physiological mechanism at the center of many contemporary discussions around mental health, trauma, and wellness).

Kobe Atwood Courtney’s Between the Fates was an elegant, yet fresh painting in movement of how the Moirai (from Greek mythology) shape the lives of mere mortals, through the threads of life. Louisa Mejeur’s The Three Graces was similarly classical, yet with a contemporary gloss. The work was an Isadora Duncan-esque exploration of three more modern challenges that women face (versus more traditional definitions of such challenges): youthful insecurity, infertility and motherhood.

One might not immediately see interests of 2022 in these works – yet a 21st century mindset, by and large, doesn’t discount any intellectual or artistic tradition outright. From there, the question is how such a tradition can be infused with more modern perspectives and aesthetic values. To me, these pieces reflected – with thoughtfulness and technical acumen – all of that.

Julianna Godlewski’s It Takes Time kicked off the program, with a daring postmodern atmosphere and an exciting immediacy. The ensemble of five offered both lovely classical lines and juicy spinal release, in choreography of dynamic timing and movement qualities.

Through intriguing formation shifts, certain dancers found moments away from the group – surfacing the perennial tension between the individual and the collective, or various individuals within a collective. I did want to see sections in certain formations develop further, because it felt like they had more energy, more life, more creative potential to give.

The score (from Michael Wall), on the other hand, had a cyclical feel of repetitive chords. Is that breaking away from the collective and coming back to it also a perennial cycle? Perhaps. Varied sections to come had other scores, and also each their own atmosphere. Each of these sections, in their own way, demonstrated that tension of the individual and the collective – but also the harmony that can arise at other points.

Especially in this modern life, we find ourselves in different contexts, but certain cycles and tensions remain. The ending brought all of the dancers together in support and harmony, and they stepped forward together – not a bad way to move through all of these shifting contexts and situations that we move through these days.

Following that came Inclined Dance Project’s Tenses, choreographed by Kristin Klein and danced by Klein and Any Campbell — a fresh and compelling look at selves: past, present and future. A bold postmodern aesthetic and movement vocabulary met a very 2022 interest: memory, imprints memories and our past leave on us, mental health, and resilience. Immediately arising between the two dancers was an element of control of another: Klein stepping forward and Campbell pulling her back repeatedly.

Yet, Klein began to pull back at some point, demonstrating agency and resistance, a choice that smoothly leading into new kinetic shaping and weight sharing. They eventually moved into cohesive and balanced unison movement – that agency and resistance leading to healthier, more fruitful relating.

Fluid movement also found satisfying resolution points, continuing to cycle through into new fluid movement. I thought about how memory has fuzzier and clearer points: lucid and less lucid words, images, feelings. As another pleasing contrast, after a section of vigorous movement they found time in stillness – with no sound but their exerted, elevated breath (a personal favorite of mine among live dance’s sensory offerings!).

A more oppositional relationship between them returned toward the end, before an ending that left my mental wheels spinning. They looked up, almost as if in some big epiphany or even in overwhelm. Observing how our separate selves through time interact can bring those moments. It can illuminate just like the lights did to these dancers in this moment – softly yet brightly bathing them (lighting By Kelly Soares, who also served as production manager).

Then came Haley Andrews’ 2,190-Day Transition, a wonderfully audacious duet study on “the inability to address toxicity” (as explained in the introduction to the piece). A sense of toxicity began right out of the gate, with one dancer physically manipulating the other like a doll.

Also clear right away were the easeful, yet crystal clear movement signatures of the duet partners (Andrews and Fiona Kirkland). Their movement was gestural and somewhat internal, but the vocabulary expanded in size and energy as the piece progressed.

That included memorably athletic and strong partnering – reflecting many contemporary choreographers’ interest in leaping outside dance’s traditional gender norms. That’s something I’ve truly enjoyed seeing more and more these days. More internal gesture and manipulation of psychical shaping remained, however – a smooth and cohesive blend of diverse qualities of movement. It was all fair game.

Through it all, whether internal or highly athletic, the duet partners remained highly attuned to each other. Structures of formations and movement vocabulary took shape, and then repeated – along with recurrent patterns in the score (from Radiohead). It all reflected cyclical patterns, and being stuck in those: days and days, months and months, years and years, of a toxic relationship continuing.

The ending felt just as truthful to toxic relationships. All of a sudden, one dancer (who had been physically manipulated all along) suddenly changed her presence to something much more self-assured, and then walked off stage. Yet, the one who had manipulated her continued moving just as she had, presumably to do the same to another. I was struck by the poignancy of this illustration of something all too common in interpersonal relationships, an illustration in movement that I won’t soon forget.

Closing out the show was Theresa Jimmerson’s Craving Competition, a jaw-droppingly athletic exploration of how women compete (or don’t compete) with each other in the workplace. This was another very 2022 focus, with the ethos of “#metoo” in some ways heightened through how COVID has impacted women’s workplace participation. Jimmerson also explained how an economic research paper on the nature of female competitiveness in the workplace was a creative seed for the piece – an interdisciplinary approach that’s also very 2022.

A large ensemble filled the stage fairly early on in the piece, wearing black and white in edgy cuts and dancing under chilling, shadowy lighting (lighting by Kelly Soares). Movement was full of frenetic turmoil for much of the piece, embodying all of the complex and challenging dynamics around interpersonal competition. At the same time, gestures of unity and support illustrated something more collaborative and less contentious.

The dancers remained grounded and incredibly strong while so unified and supportive of one another. They retained that duality while also moving through thrilling movement: muscular, quick and technically demanding. I thought about the multiplicity of possibilities in the lives of women: which they crave, which they reach for, which they achieve, which they’re blocked from achieving. It’s nothing like simple, and the layered quality of this piece aligned with that truth.

The ending was an image that will stick in my mind for some time; the dancers together fell to the ground from standing, landing in a synchronous “THUD” as the lights cut out. Meanings could certainly be deduced, but what struck me most was the raw physical power of the moment.

In the program overall, the way it wore a 2022 ethos right on its sleeve – lived and breathed such an ethos, really: there was a lot of meaning there. On another level, it was simply a satisfying, but also exhilarating, two hours. The 21st century, for all of the challenges we currently face, bursts with possibility. Dance can do the same, and artists such as those who created Rhode Island Women’s Choreography Project 2022 program make that undeniable. Let’s jump in!