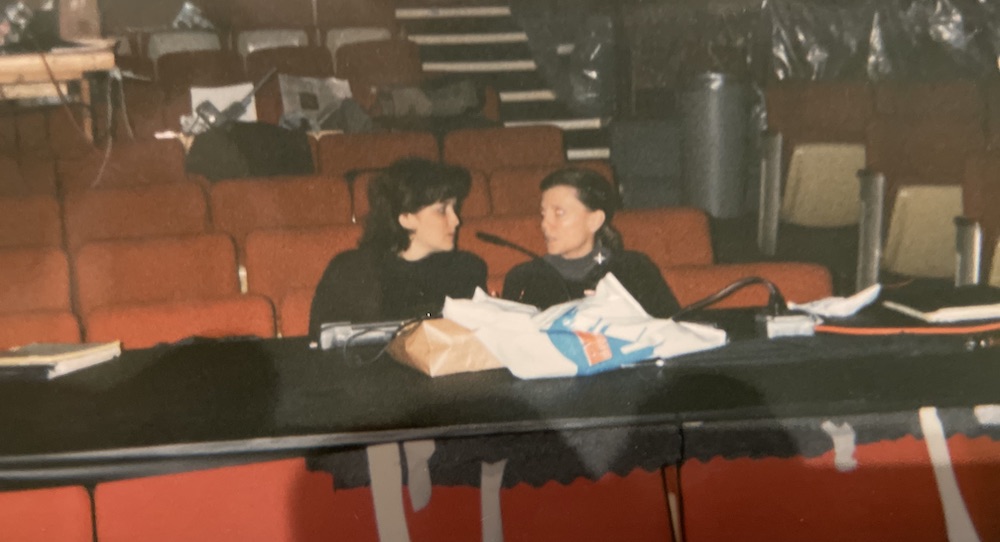 One of the greatest things I ever learned from Annie the entire 15 years I worked with her was how to transition from one number to another. On the surface, this sounds like a relatively easy thing to do. What’s the big deal? You are moving from one world to the next, seamlessly.

When we rehearsed numbers, we rehearsed them in Blocks. One Block was either three or four nights long, four hours per night. Theoretically, by the last night in the Block, the number should have been completed. That night was the fun night, as we would go around to each number being rehearsed, and watch it for the very first time, which was just plain fun. It was our time to take notes so that we could help the choreographers and directors with more rehearsal time, if needed, and time for the choreographer or director to convey what he or she felt the lighting should be in order for the number to be depicted properly.

Click here for a brief peek at blocks in rehearsal. Note that these continued to occur after Annie had retired from the Broadway Theatre Project (BTP).

Once we had all of the numbers choreographed, Annie decided on show order, a lighting plot was made, and it was transition time. Now, this could be an extraordinary day if you just watched carefully as Ann took the first number and second number and looked at them in silence for what could be a short while or a long while, then started telling the performers what to do verbally and if they couldn’t do it, she would get up from her seat and go over and move them to where they needed to be and tell the choreographers how it needed to happen. Watching this develop out of thin air showed what a genius she was, as she did this just by looking at a group of dancers in silence. If the group was silent and on point and didn’t go running from the room and disappearing before she finished, life was glorious. However, if a group didn’t show up when they were called and didn’t show up and didn’t show up, they stood the chance of the number being removed from the show. One thing is certain, and that is you would then listen to Annie explain why the lack of professionalism would follow you everywhere if that kind of disinterest and disrespect was a pattern at BTP and beyond. Things usually improved after that.

Now the idea of transitions is this:

If you have two numbers placed next to each other and they have nothing to do with each other, how do you go from one to the other without it looking like a talent show? How do you make it look seamless? Annie had a touch that could allow you to live in one world created by the first number. At the end of that number, she might have asked for chimes or a low drumbeat, or a combination of the two numbers which were side by side, or some crazy version of some of the songs that would play and the first cast would leave in some manner while the second cast would enter as the world was changing for their number, they would take their place and there you were, in another world and you probably didn’t even notice.

We were known for our transitions. As a matter of fact, we are still identified by our transitions, as not only were they and are they done at BTP, but when we mounted Fosse, we made the decision to tie the numbers together using transitions.

So a Tony Award-winning show was tied together artfully by what was developed at BTP.

Our transitions on Fosse at times became so mesmerizing, that they were almost numbers and people wanted to be in the transition.  If you watch the show, “Fosse” on YouTube observe how one number bleeds into the next number and you will understand.

This is an example of our transition from “Rich Man’s Frug” into “Cool Hand Luke” from Fosse.

The last number in “Rich Man’s Frug” is called “The Big Finish”. It consisted of dancers moving crazily about the stage, some on hands and knees during the improv moments, sometimes doing crazy ’60s movements during choreographed moments. The idea was that this was a very rich group of young people from the Upper East Side at a party. As Gwen Verdon and Annie explained to me, this number progressed from these spoiled rich people slithering about the stage as if they owned the room (the section was called “The Aloof”) to a little later in the evening when they were loosening up and playing at “boxing” (called “The Heavyweight”). The last number of this trio was “The Big Finish”, and it was very early in the morning when most were partying too hard. At the very end of the number, they pulled themselves together and hit the initial pose from “The Aloof” while the audience was still laughing at the sight of them completely out of control in the final part of that number.

The next number following this long number ending on a raucous note was called “Cool Hand Luke”. It is an extraordinary number consisting of three of the show’s finest dancers doing intricate movements to the most beautiful, haunting music. The lighting is low, and the opening of the number begins with the plucking of guitar strings and very light cupped hand clapping and finger snapping.

The question is: How on earth do you move from “Rich Man’s Frug” to the quiet beauty of a canyon where horses quietly rear as they see a snake behind them, in the number “Cool Hand Luke”? Well, Annie Reinking had the ability to create visual magic. I was in a classroom for years watching and learning how to finesse such things. This may be one of the most valuable lessons I ever learned from this incredible woman, friend and artist.

[Please note that this video starts into the beginning of the transition. You are looking at the Frug dancers in their tuxes or glittery outfits moving beautifully about the stage to music that has already changed.]

Can you believe that one word could generate so much talk?