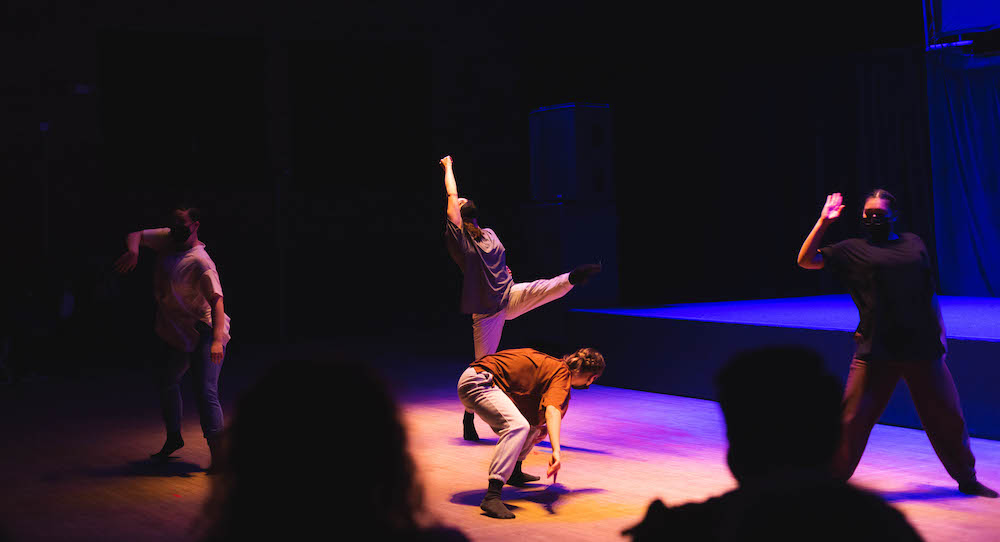 An amazing thing about dance (among many amazing things) is its universality; there are no language gaps to bridge or things lost in linguistic translation. That offers potential to build intercultural connection and understanding. I thought about this potential while taking in NACHMO Boston 2022.

Co-Regional Director of NACHMO Boston karen Krolak (and also co-artistic director of Monkeyhouse, along with Nicole Harris), addressed the elephant in the room of the current conflict in Ukraine – and, in the face of such events, the need for dance and the arts in our communities and in our world. The notable number of culturally-based dance forms – from Bhangra to Greek cultural dance – underscored this sense of global awareness.

At the same time, the program highlighted the plethora and stylistic diversity of artistic voices in Boston’s dance community – in one metropolitan area. In this way, the program was thinking globally, but acting locally: opening space for the wider world of dance and movement while also standing as a firm support for local artists (who, at times, can have difficulty getting resources to create and space to present their work).

NACHMO, as a larger institution, also reflects this “glocal” ethos. For many years, NACHMO has challenged choreographers to create work within one month, the month of January – and then offered infrastructure for those artists to present that work in February. NACHMO began in Brooklyn, NY, but now has hubs world-wide, explained Boston Co-Regional Director Brenna Banister (who welcomed audience members and offered further context after Krolak, and is also artistic director of Alive Dance Collective).

The following pieces in Boston’s NACHMO were most impactful and memorable to me, though all of the works had a fresh voice and unique aesthetic. Honorable mentions include: Brett Bell’s (Bell & Co) deliciously mysterious and evocative Somewhat Lost / Somewhat Found; Aftab Dance Group’s lively and thoroughly enjoyable large group piece Spring is Coming, in a classical Persian dance style; Marissa Chura’s Intention, or Lack Thereof, a solo thoughtfully bringing together classical music and contemporary dance vocabulary to remind us of the beauty in the body’s quieter, more internal truths.

The program kicked off with when you see me, choreographed and performed by Lila Ruth Klaus and Shira Weiss – a work with simple clarity but also enticing risks. Klaus and Weiss began seated back-to-back, and then slowly began to separate. Tenderly, they swayed side-to-side and reached for contact. Clear linear pathways in space contrasted undulating and serpentine shaping at the body level.

Moving to and away from each other, executing the straightforward and less definable within their movement, they illustrated different ways of exploring, learning about, and relating to one another. That felt like a blank slate on which audience members could see themselves and those in their lives coming towards, moving away, relating and diverging. The layered instrumental score, “8 Frame” by The Books, enhanced that blank-slate quality. That’s the mystery and possibility of human connection that we move through each day.

detritus dance’s in the ether, coming later in the program, was another memorable duet. A score of Emily Dickinson’s I felt a funeral in my brain being recited brought an existential sense: life, death, solitude, shared experience. The dancers (and choreographers) Caroline Bradbury and Claire Lane, manipulated classical shape: articulating and creating continuity, breaking shapes in half and smoothly forming new ones. In this way, they challenged something accepted and expected – just like Emily Dickinson’s work does with the grand, universal themes of living and dying.

This work’s powerful ending stuck with me, in particular. A motion of cradling brought to mind the necessary care and vulnerability of youth and advanced age. The dancers then resigned themselves to the floor, as if settling into a final sleep. But they soon rose again, torsos rising from the floor and limbs moving as fluidly as seaweed. It felt as if they had moved past struggle and uncertainty, to truly come to a final rest.

A few solos in the program were also quite memorable. As part of this program’s notable (and wonderful) stylistic and cultural diversity, Awakening – choreographed by Shipra Mehrotra and performed by Priya Bangal – came third in the program. The solo is in an Odissi style, explains the program: a classic dance form from Odisha, India.

True to the work’s title, Bangal moved slowly, thoughtfully, gently to begin the work – as if awakening. In an unhurried and easeful quality, she offered beautiful intricacy of shaping in her movement. That kind of thoughtfulness, care, and mindful pacing is refreshing in today’s culture of immediacy and instant gratification.

Her costuming – meticulously layered yet also with the simple beauty of a single flower in her bun – enhanced that thoughtful quality. The way that she gestured to the audience as she bowed, demonstrating sincere appreciation, also felt refreshing and simply warmed my heart.

Following that was another striking solo, Ivory from Meredith Pellon of SLOWBURN Dance. The work demonstrated that when it comes to dance and the body, the deeply profound can be found in something smaller, slower, more internal. Pellon, with fresh and compelling shaping of her body, didn’t move far out from one spot in the larger stage space – not until later in the work. That approach challenged the idea that dance has to develop to a certain size and energy at any certain pace.

Just like with Bangal’s solo, that gentle development, thoughtfulness, and unhurried quality felt refreshing and gratifying. Those qualities were an important reminder that growth and change often must take their own time, and confronted audiences – again, in this culture of immediacy – to have patience with that.

Pellon’s work also had a strong element of naturalism; the blue and green in her pedestrian-style costuming, as well as the repetition and synchronicity within the movement, brought to mind for me the wise and continuous rhythms of the natural world. In the midst of our demand for “now!”, “faster!,” nature’s rhythms can teach us another way.

Trios also had their own perspective and aesthetic vision to share – and, taken all together, further demonstrated the unique offerings of both local Boston dance and dance forms across the world. Coming third-to-last in the program was Nozama Dance’s The Way Out is Through, a trio choreographed by Olivia Moriarity and danced by Dana Alsamsam, Nell Mancini, and Maria Napoli.

Nozama Dance Collective is a Boston local dance staple, and the company always has something strong and intriguing to share. In this work there was clear juxtaposition of action and stillness, as well as that of separation and proximity of the dancers in space. These contrasts spoke to multiple ways of being and moving in community, in space with other also independently-moving humans.

Nozama is also typically quite strong with musicality, and this piece was no exception; as part of that contrast of action and stillness, clear and compelling accent in movement aligned with the percussion in the score (Sol by Alef) to delight both kinesthetic and auditory senses.

Closing out the show was Bollywood Fusion, a joyful, vibrant Bhangra piece from Bawri Studios. Geetika Bajpai, Geetika Mathur and Moumita Sinha danced the work. They wore black and gold, enhancing their overall air of uncomplicated, classy elegance. The shaping and gesture of their movement was beautifully detailed, while they also danced expansively and energetically.

All of that included footwork that was both expansive and intricate, with – as is common in Bhangra – influence from classical Indian dance forms but also more modern, Western forms such as jazz and hip-hop. In the same way, the score featured classical Indian phrasing and instrumentation edited with vocals from artists like Ed Sheeran and Rihanna. All in all, the work offered a graceful meeting of the old and the new, the classic and the contemporary.

Those forces can co-exist, as can a focus on both the local and the global. In the world of 2022, we share common challenges but are also watching unimaginable tragedy taking place far away from our backyards. We also see how we can’t neglect the need that is right in our backyard, nor the talent and desire to address that need that’s also right there. We can think “glocal”, appreciating the wonder surrounding us and that which vibrates far beyond us. We can start right where we are, today: thinking globally, acting locally. Dance art like NACHMO Boston 2022 can lead the way.