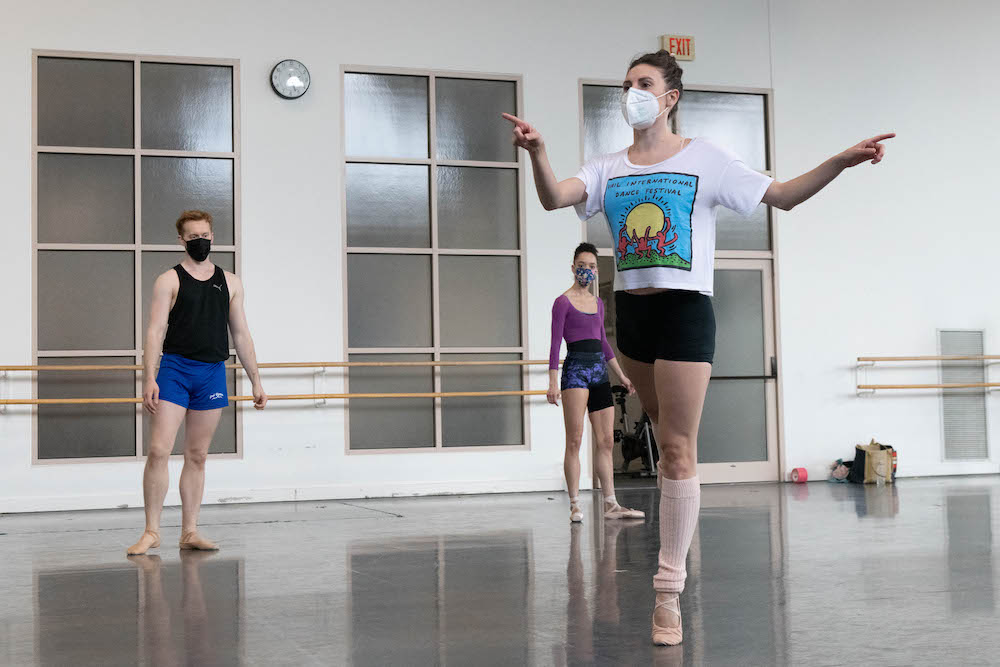 “Actions speak louder than words,” goes the old saying. In recent years the world has fervently grappled with meaningful issues, from gender parity to racial equity to climate change – arguably, more so than for decades before. In that atmosphere, many have called for action over words: for concrete steps that address systemic problems over saying what sounds like the right thing.

The dance world is in no way exempt from that dynamic. For one, many in the field have discussed how even while some see dance as a feminized space, men are much more prevalent in leadership roles such as choreographer and artistic director. Boston Ballet has put action behind conviction with ChoreograpHER, a program that featured the work of five women choreographers: five dancemakers each with a unique perspective, aesthetic, and background informing their work. To boot, all five works were world premieres.

The initiative kicked off in 2018, with a firm intention to nurture women choreographers with creative space and other essential resources. The work generated from the program was first presented to more intimate in-studio audiences. Still with the same clear and concerted mission, the program’s artistic fruits have now been part of a Boston Ballet Opera House season.

Apart from the three pieces discussed below, the program included Boston Principal Dancer Lia Cirio’s Chaptered in Fragments and Melissa Toogood’s Butterflies Don’t Write Books. Cirio’s piece was imbued with enticing mystery and just as enticing in structure: a series of small movement stories cohesively weaved together, like chapters in a true page-turner. Toogood’s work was just as intriguingly mysterious. Full of bold choices in both movement and overall aesthetic, I delighted in its striking – yet also straightforward – beauty.

The program kicked off with Point of Departure from New York City Ballet Principal Dancer Tiler Peck: a work of intriguing contrasts and harmonious movement. A brightness exploded off the stage with the white backdrop and a rainbow of neon colors on the ensemble of six dancers. The score offered a deeper and more mysterious feel, however. The musicians playing it were also on stage behind the dancers, in the darkness of silhouette.

I was intrigued by how the movement seemed to marry this dark and light: yin and yang, action and stillness, creation and rest. Lifted in its energy, it also had a firm grounding. Continuous and sinewy, it also had clarity of shape and timing. The virtuosity at hand was not that of extensions up to the face or flight impossibly high above the stage, but rather of continuity and ease moving through Peck’s choreographic choices.

Even in occasional moments of stillness, the resonance of movement pulsated through the air. I did wonder if Peck could have employed that effect more through more moments of stillness – because that resonance was thrilling. Similarly, the ending tableau radiated such resonance, and – for me – the curtain dropped all too soon, to make it dissipate into the ether.

Ultimately, the movement achieved cohesion and balance while aesthetic effects stood in contrast. Perhaps the point at which opposites meet is Peck’s “point of departure”, a jumping-off from one extreme into another way of being. Perhaps movement can be that point of convergence, risk-taking, and discovery. All of that waxing philosophical aside, both the cohesiveness of movement and the dynamic tension of aesthetic contrast made this work simply a pleasure to experience.

Coming fourth in the program was Shantell Martin’s Kites: a work of a fresh concept and approach, vibrant movement, and a thread of natural harmony through it all. As the curtain rose, the first thing I saw – the thing it felt impossible not to see first – was the backdrop of a gigantic map in black and white. As Martin is also an acclaimed visual artist, it makes sense that she’d bring this sort of aesthetic frame to the work: bold and well-executed.

It wasn’t until later in the work that I saw cartoon-like faces within the hills and valleys of this map (though, from the program cover and art in the theater’s lobby, I had some prior reference point for these designs). Rorschach-style, a different way of seeing could bring a whole new meaning. Also intriguing to me was how I couldn’t “un-see” those faces once I could see them. Awareness, by and large, can’t be taken away.

The movement, and the formations through which it played out, embodied co-existence within multifaceted community. Dancers moved together in lines: receptive and soft but also strong and clear. Ebbs and flows of lines, and later other formations, felt like the continuous push and pull of waves against a shoreline.

Subdued blues in costuming (by Martin in collaboration with Lisa Dezmelyk) and lighting (by Brandon Sterling Baker) enhanced that feeling of continued harmony. Extensions and leaps felt boundless, yet more than any technical element what prevailed was that sense of vibrant co-existence.

With the large ensemble moving in and through these aesthetic elements, and the additional layer of the robust score (Tromba Lontana and Short Ride in Fast Machine by John Adams, by arrangement with Boosey & Hawkes), there was also an element of spectacle at play: not “over-the-top” or campy spectacle, but just the right energy to delight.

Despite that prevailing current of pleasant harmony and ease, certain moments did evince tensions below the surface (the sort of tensions that are arguably inevitable when humans gather). Like with a Rorschach image, there can be more than meets the eye. Things can be percolating under the surface.

Closing out the program was Slipstream from Claudia Schreier, Atlanta Ballet’s Choreographer in Residence. The movement was as pleasing as the overall aesthetic was impactful. It might have been partly the title, partly the blues across the stage (lighting design by Brandon Stirling Baker, costume design by Erica Desautels) – but just about immediately after the curtain rose, my mind went to moving bodies of water.

Indeed, the work came out with a true punch, with a large and vivacious ensemble. It then eased into a luscious pas de deux: a shift akin to a roaring rapid becoming a babbling brook as it moves along its path. Shapes, gestures, and movement pathways of continuous circling emulated the easy curves of moving water. Supporting that sense was Evan Schreier’s mesmerizing backdrop, with curves of various blue hues intersecting and diverging.

Further sections offered new ways for dancers to relate, in various groupings of growing and shrinking sizes. The dancers brought physically organic pathways to rather classical shaping (though the choreography was not without its own ingenuity of shape): certainly a challenging task, one to which the dancers brought tenacity and heart.

Social dynamics beginning to build added further layers to curiously peel back. Ensemble members would “slip” in and out of these ways of relating, floating down the stream of being and moving in connection. The stage buzzed with energy, just as a natural space with nourishing water buzzes with life on a summer day: living things in negotiation, in conversation, in the fullness of life.

The ending – a gently moving tableau, with one performer moving off on her own path and the others watching – brought a sense that the conversation of beings in dynamic negotiation would continue. A million other ways of seeing the work were of course valid; it did also offer mystery, the kind that can create productive uncertainty. Life, in the depths of the natural world or in the wilds of skyscrapers, can be just as mysterious and fruitfully uncertain.

Yes, it can be uncertain how we step forward from here towards a better world – but we can at least take steps forward. Boston Ballet, for its part, is taking conscious steps towards change with programs like ChoreograpHER: giving women choreographers a space to take risks, hone their voice, and be seen.

Brava to the company for taking such courageous and meaningful steps, and brava to the choreographers who had the fortitude to create and share what resulted. Brava to the seminal Boston Ballet artists who provided the canvas of their bodies needed to make it all possible. With such commitment, vision, and skill, we can move together toward needed change.