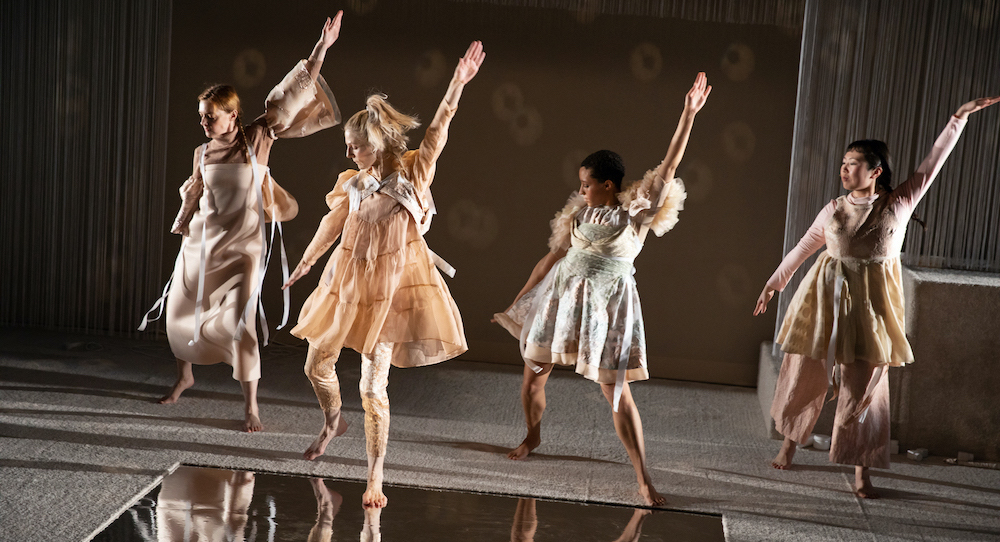 For all its colorful chit-chat, The Mood Room presents a remarkably one-dimensional, insular world organized by a sense of privilege so vast that life itself is zapped of any substantive meaning. Big Dance Theater’s latest production created by Annie-B Parson may be based off a play written by Guy de Cointet in the 1980s as a critical response to the Reagan-era “Me” generation, but its ability to turn the deep shallow, to see-nothing-hear-nothing-do-nothing without ever ceasing to move or talk, to extinguish human emotions like grief and desire with distraction and luxury feels uncomfortably contemporary.

Guy de Cointet’s Five Sisters, the play from which The Mood Room takes its text, is a self-avowed hodgepodge of literary plagiarism and advertisement copy that chaotically describes five sisters returning from their separate lives to their family home in L.A. The set, designed by Lauren Machen with lighting design by Joe Levasseur, is a pristine pastel pink room dressed in plush carpet. It is multilayered and excessively color coordinated, featuring walls of string hanging from the ceiling, staircases leading to nowhere, turned over chairs, lacey books, gift-wrapped letters, a mirrored floor in the center that never seems to pick up significance, and miscellaneous objects scattered here and there whose use never becomes clear. The dancers’ costumes (which are gorgeously rendered –– props to costume designers Samantha McElrath and Baille Younkman) are simultaneously childish, royal and futuristic, and match the set (all too) perfectly.

The sisters each fulfil certain archetypes –– the workaholic, the lazy narcissist, the artist, etc. –– but these personas are clearly vacuous: we are assaulted by their sameness. Interactions are as random and shallow as everything that surrounds the sisters, and they often can’t tell one another (or themselves) apart. Even the most seemingly significant lines are delivered like marketing-copy, simultaneously emphatic and robotic, and despite the matchy-matchiness of everything around them, nothing quite adds up; intonation does not match what is said or what is done, and non-sequiturs are more ubiquitous than any remotely traditional sense of logic or rationality. This hollow performativity remains intact even when a sister faces upstage and talks seemingly to herself, leaving the audience to assume that the characters have totally ingested the ideology of the era.

The minimalist movement vocabulary is primarily gestural, and despite its clarity, is surrounded by an air of boredom rather than intentionality. Lounging is the most pervasive state of being. Everything feels light, too light –– even the most vigorous drops and rolls on the floor seem largely unaffected by gravity –– and this is mirrored by one sister’s fear (a fear that eventually drives her away from home) of the white light of the sun. Alien rituals like arm flapping hugs and “paws up” poses are punctuated by conversations about beauty and agelessness, name-dropping doctors who can help the girls achieve such things, and complaints that the elegantly-glassed water is unclean. At one point, one of the sisters does a little dance in ballet shoes, its thrust equally as meaningless as the trio in commercial dance formation that reads like an odd fashion show.

The text and movement feel interchangeable; sometimes a movement interjects where a word might have belonged while other times entire movement phrases seem to replace spoken communication. I felt like I was being taught a new language that the deliverers themselves only partially understood, a choppy dialect distinguished by its overwhelming desire to communicate nothing tangible.

Although the so-called fourth wall is never quite established enough to be broken in earnest, the sisters’ commentary on the musical accompaniment is the most consistently comedic motif of The Mood Room. The musical score (with music by Holly Herndon designed and re-composed by Mark degli Antoni) is a diverse helping of techno pop subject to various forms of distortion and fragmentation that sometimes pitches up to a more primary focus and other times blends into the background.

The screen at the top left, which continuously plays a video by Keith Skretch that we soon gather is a representation of the mood room itself, is shielded by long tassels of pale pink and feels almost like a laboratory of sorts. Things happen more slowly in there (if anything is really happening at all), and we’re sometimes drawn to splashes of color on screen that never infiltrate the “real” set, but are referenced by the characters (red paintings, the doctor’s yellow jacket, exciting blue, the desire for green). I wondered several times if the dancers in the mood room were the ones who were off stage at that time, but never fully found out because I’d get distracted by something happening in the space or give up because it was difficult to see. I left the show uncertain of the mood room’s significance (a counterpart to the delusions and misperceptions of the “real world?” a place to rest?) and uncertain if I cared.

“The artist” sister delivers a monologue at the end of the piece, saying something along the following lines: One hundred years from now, our behaviors and our work will be regarded as weird. Two hundred years from now, we will be completely lost and forgotten. Despite the unrelatability that’s been forcefully baked into these characters, for a moment our worst fears live on her lips, the same lips that sing (the first instance of singing throughout) out “beautiful” as our other option. She concludes: “Excuse me. I’m talking too much again. Just the mood I’m in.” A negation of all that has come before or only the previous line? An apology for speech that ensures the return of the silence necessary to continue?

For all The Mood Room’s meaninglessness, at least one thing seems clear: this is not a world we want to live in. Parson says in a program note that “No one changes; no one learns anything.” She also says that Cointet’s writings “bask in the hot mess of the non-narrative posing as narrative –– a state I would call living!” Is living necessarily such a non-narrative series of poses in which there is no chance for growth? And how accessible are these artful claims to the people (I’m thinking of the general consumerist public) who need to hear them most? Not very.

Where to go from this place of undeniable cynicism? Should we stoically resign ourselves to this fraudulent world while creatively bellyaching about it in our art? Of course one must avoid easy consolations and shallow opportunities for transcendence, but one can resist the trappings of fate without being naive.