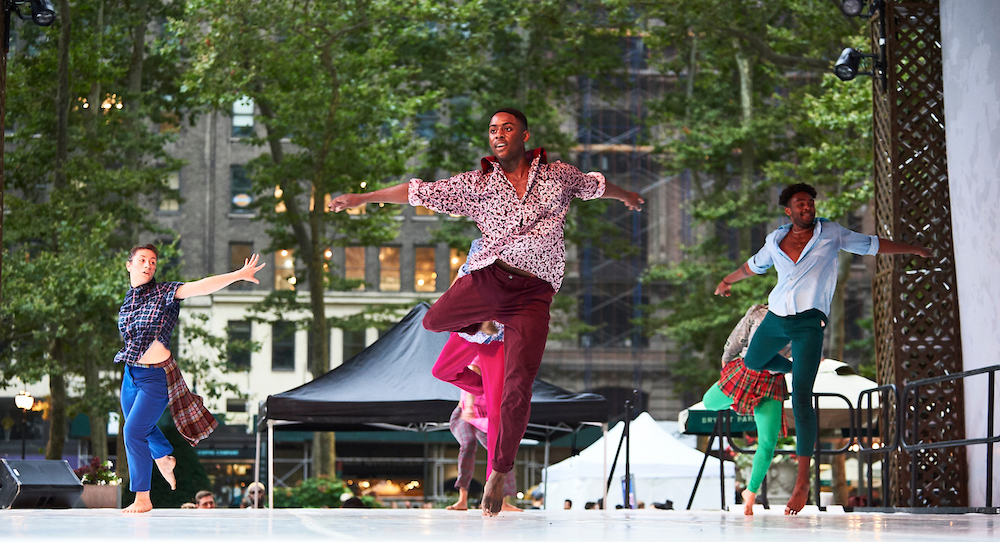 Bryant Park Picnic Performances kicks off this August 16, with a series of free dance events. All performances are free, first come, first-served seating, and advance ticket registration will no longer be required.

August 16: Limón Dance Company and Music From The Sole

Leading it off on August 16, at 7pm, will be American Modern dance vanguards Limón Dance Company, as well as tap dance from Music From The Sole. Limón Dance Company, founded in 1946, by José Limón and Doris Humphrey, has been at the vanguard of American Modern dance since its inception and is considered one of the world’s greatest dance companies. For this performance, the Company presents two repertory classics: Humphrey’s Air for the G String and a Suite from Limón’s The Winged. Created by Humphrey in 1928, Air for the G String is a sculptural dance set to Bach’s Orchestral Suite No. 3 in D Major. Inspired by Humphrey’s love for the beauty of the music, the flowing movement and reverential gestures suggest an inner exaltation. Through movement that resembles birds’ intricate patterns and rhythms, The Winged transports you to a world of nature that blends with the world of man. Choreographed by Limón in 1966, the piece possesses an unmatchable sense of beauty and breath.

Music From The Sole opens the evening honoring tap’s jazz and improvisational roots with excerpts from existing and in-progress works, exploring its identity as both a dance company and a band, embracing that tap dance is both dance and music. Led by Brazilian choreographer Leonardo Sandoval and composer Gregory Richardson, the company was founded in 2015, and has appeared at venues including Lincoln Center, Jacob’s Pillow, The Yard and more.

Next up will be Paul Taylor Dance Company, one of the most famous and dynamic modern dance ensembles of our time, innovating and transforming the art form of modern dance since 1954. For this engagement, the Company will dance Esplanade, the definitive Paul Taylor work that is at once playful, somber, romantic and explosive – a pillar of modern dance that instantly affirmed Taylor as one of history’s greatest choreographers.

Founded in 1981, EMERGE125, formerly known as Elisa Monte Dance, is a hub for dance performance, creation and education. The organization operates dual homes in Harlem and Lake Placid, New York, while serving audiences both locally and around the world. At Bryant Park, EMERGE125 will present work from three alluring and engaging pieces, all choreographed by EMERGE125 Executive Artistic Director Tiffany Rea-Fisher. The first piece, Spirit Celestial, is Rea-Fisher’s physical response to Sarah Yomen’s beautiful visual work. The next piece features two movements – “Tilted Arc” and “Emerged Nation” – from Emerged Nation. The final piece will be an excerpt from Rights of Renaissance, which explores the untold stories and most pivotal figures of the Harlem Renaissance.

Ballet Hispánico brings communities together to celebrate and explore Latino cultures through innovative dance productions, transformative dance training and community engagement. For 50 years, Ballet Hispánico has been the leading voice intersecting artistic excellence and advocacy, and is now the largest Latinx cultural organization in the United States and one of America’s Cultural Treasures. Jamel Gaines Creative Outlet is a non-profit organization whose mission is to use the artistic expression of dance and other integrated art forms to uplift communities through education, performance and cultural programming. The soul of our work is rooted in social justice, and spiritually connecting to one another through the arts. Founder and Artistic Director Jamel Gaines has dedicated his life to delivering artistic excellence and stirring, soaring performance to audiences everywhere. Some of Gaines’s more recent choreography includes the crowd-pleasing presentation live streamed across the internet during Spike Lee’s Annual Tribute Concert to Michael Jackson televised choreography, and dramatic performance by contestants on So You Think You Can Dance.