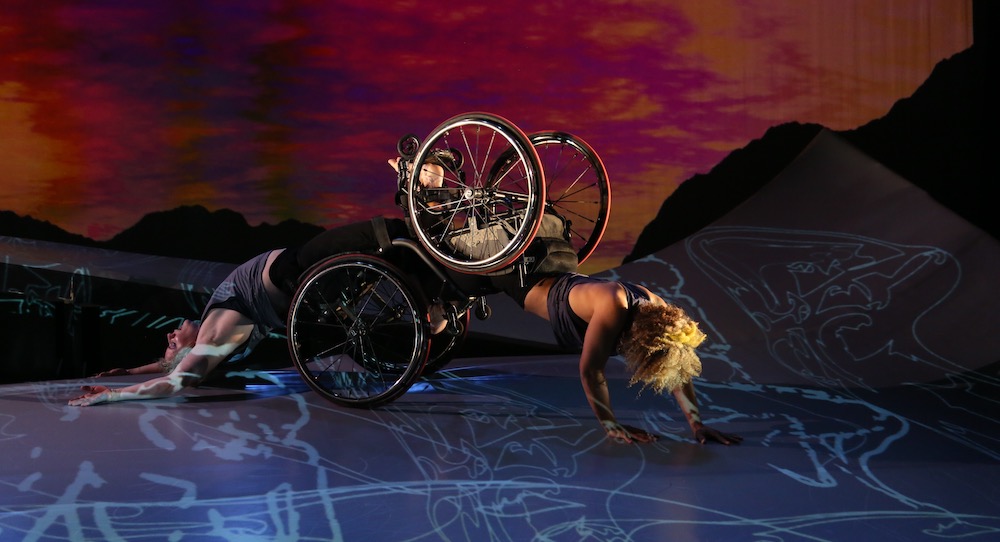 Two dancers, both in wheelchairs; one crawls forward and the other arches her back as she is dragged along the floor. A sunset appears behind them. Alice Sheppard and Laurel Lawson of Kinetic Light. Photo by MANCC/Chris Cameron.
Share
Tweet
Share
Share
Email
Comments

Humans began to dance to connect with the natural world around them, as well as with one another. Without the creature comforts we know today, they were at the whim of nature’s ebbs and flows. Life, on a spectrum, shifted from harmony to tension with the natural world — on which they intimately depended for survival. Kinetic Light’s DESCENT, inspired by the 1890 Rodin sculpture, Venus and Andromeda, explored and illustrated ebbs and flows of the harmony-tension duality. On another level, it was also deeply connected with imageries and energies of the natural world. Thrillingly and memorably, as stated in an introduction to the work, the artists of the company explored and illustrated what it meant to do all of that with “reckless abandon” — all virtually, in a wonderfully-filmed program.

The lights came up on Alice Sheppard holding on to the peak of a huge ramp, hands exploring and initiating movement. She lengthened out and spun to change direction, swerving through her spine with musical notes. A tension emerged between the sharp notes and slower melody and anxious, jumpy harmony line. While Sheppard further explored the structure, a second dancer emerged from behind it — Laurel Lawson. Stunning visuals of the night sky, designed by Michael Maag, filled the backdrop throughout.

Sheppard shifted to move to a lower level for a moment. As she moved slightly off the floor, as if floating, there was an effect of swimming — deepened by the wave-like lighting effects across the stage. She disappeared behind the structure, and Lawson continued the effect that Sheppard had begun, and then ultimately rose back to the structure. Later, she lay prone while below her Shepard lay supine, their bodies parallel. Sheppard reached down toward Lawson, and there was a tender human moment. Part of me wanted to breathe with it for a little longer. Maag’s stunning visual effects took my mind off that soon enough; lighting effects of trees, hills — in combination with the mysterious score — entranced me.

Their costumes were also stunning; golden folds and colorful makeup evoked an air of the goddesses of the ancient world. A tonal shift came with that proverbial “bang” as Lawson, bent backward while rolling forward in her wheelchair, collided with Sheppard. The music gained in speed and intensity, and the two dancers leveraged physical laws to spin each other through space. I could begin to see the personalities and characters of these two dancers’ roles solidify, sometimes in tension but also complementing each other — two parts creating a harmonic whole, just as their bodies counterbalanced each other in partnering.

As Sheppard dropped down a level from the raised structure, the ocean effects returned — and the water rippled from the catalyst of her splash. Still, the stars and constellations shone above. The harmony of all of the natural elements, in harmony with these two movers, viscerally hit me. With both dancers on stage again, tension between the two characters reemerged, but it seemed like soon that became energy in their bodies and in their space. In their wheelchairs they rolled forward and fell back, arms open and chests to the night sky above. Circling in unison with one arm up, the visual effect of the lighting patterns across their skin and costumes was mesmerizing.

Counterbalancing in turning together, pushing off one another to create a Newton Balls effect on the structure’s slope, their clashing had evolved into symbiosis. Constellation shapes soon filled the stage and a vibrant sunset filled the backdrop, deepening that sense of natural harmony. They slowly wrapped their arms around each other. The power of human touch here was palpable. Later, Lawson mounted Sheppard’s wheelchair. Leaving hers behind, she rolled forward to be supported by Lawson’s arms, floating parallel to the floor. Floating limbs made shadows across the dark, fading sunset backdrop in a way that was visually captivating.

Lights having risen up, they soon rose to the top of the ramp. A beautiful choreographic choice was how in turn, they lifted each other’s chests off the floor from the biceps, arms held in a wing like shape; it was as if they were helping each other to fly. Another stunning moment was Lawson balancing Shepard to face forward, feet rising off the ground. She fell sideways until she fell to the surface of the slope and rolled down to the lowest level.

Later Sheppard sat on its highest point, dropped backwards and — with the sound of a splash — seemed to have fallen into the ocean. Lawson looked over the edge with an expression of shock, and then curled up in a fetal position as if in deep sadness. Yet Sheppard was soon back! Seeming to jockey for position, she and Lawson once again counterbalanced off each other with Sheppard’s wheelchair. Lawson back in her own wheelchair soon, they moved around the space and in patterns and at speeds that felt reflective of some sort of mixture of the harmony and tension that the two had found before.

Overhead shots brought even more dynamism to the visual effects here — an icy mountaintop filling the stage. That effect intensified the feeling of the grand heights of mountains, though I wondered if it also could have been an aesthetic tool to use at earlier points in the film as well. Perhaps that might have detracted from its effect here, in connection with the theme of heights. Also in that theme of steep heights was Sheppard balancing on Lawson in her wheelchair. Both my mind and soul delighted in their command of the complex physics at hand here and in their attunement to each other’s bodies.

Soon after that, the ending gave me even more for my mind and soul to chew on. The two performers looked out over the ledge of the highest point in the stage structure, as if looking out over an abyss. Then the lights went dark, and credits began to roll. Having explored and experienced so much, much else still was left to traverse. Such can be the life of an artist, and anyone who dares to live boldly, creatively, and fully. My heartfelt thanks to the artists of Kinetic Light for reminding me of that important truth.