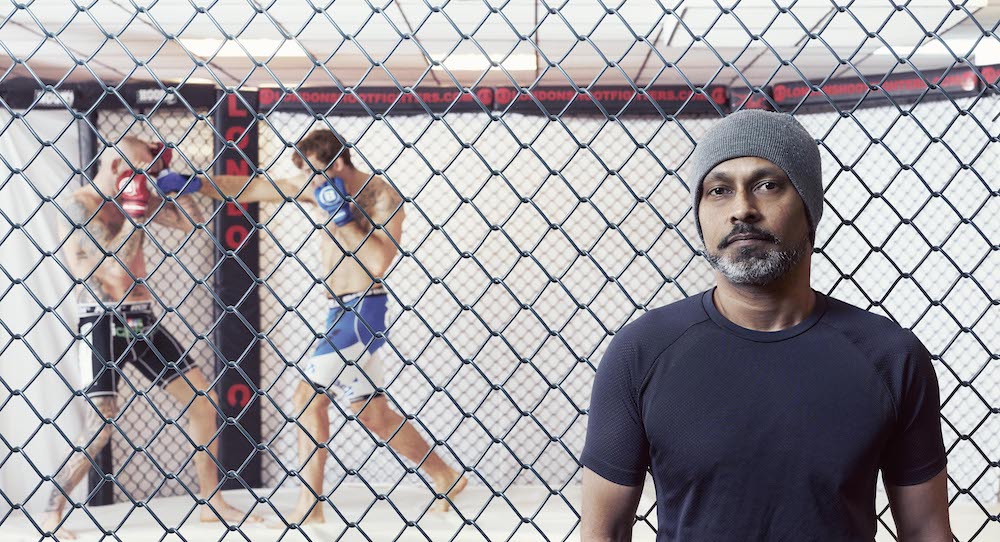 Extreme Combat: The Dancer and The Fighter documents Akram Khan’s foray into a field that dancers rarely venture — fighting. Sure, we may include aggression or animalism in our choreography, as Khan often does. But despite the intensity, and arguable brutality of our art form, how often do we intentionally inflict pain on someone other than ourselves?

Khan faces his twinned fascination with and aversion to the physicality of violence by spending time with three professional mixed martial artists in the weeks leading up to career defining fights at the Wembley Arena. From his research, he creates a dance piece to accompany one of the fighters on his walk-out to the ring. Presented to a crowd vastly different from his usual patrons, the success of the piece depended entirely on Khan’s ability to relate himself to the violence for which the crowd had come. And to do so, he had to dig into what extent violence is intrinsic in human nature, and in himself.

The first of the three fighters, and the one Khan is to choreograph for, is Terry “The Dominator” Brazier, an opponent with a reputation for raw brutality. When asked if he likes the feeling of violence, he responds, “We’re animals. It’s good to know you’re bigger and stronger than the next guy.” Outside his reputation in the ring, Brazier is a loving father of three, and takes his son to training at the gym just as the kids of many dancers grow up in the studio.

Second is Michael “Venom” Page, known as MVP, and known for his showmanship. Mixed martial arts (MMA) as an industry is based in entertainment, a concept that unnerves Khan. Page is famous for his dance moves in the ring. A tall and lanky fighter, he keeps in constant motion, using dance to throw off his opponents, prancing around them to disguise the intention and timing of his attacks, while also amusing the audience.

Page teaches Khan some of the basics. As a dancer, Khan picks up positioning and footwork with ease, but as soon as Page instructs him to punch him in the face, Khan recoils. In a reflective moment after the training session, Khan notes that even as he throws his body forward to strike, it feels as though some invisible force holds his punching arm back. A physical block against violence seems to stem from his mental aversion to it. “There’s still a barrier, for me” he says. The third fighter, and maybe the most helpful to Khan in framing violence as a potential positive, is Mike “Seabass” Shipman. Having studied philosophy at university before dropping out to become a fighter, Shipman’s outlook might be the most relatable from an artist’s perspective. While working over a punching bag with Khan, he speaks about MMA as learning “a vocabulary of techniques,” expanding that “once you learn those techniques, you can start to form sentences. Then it’s kind of freeing. You lose yourself in what you’re doing. You are that moment, you get a little taste of what everybody’s been looking for, for forever.” He clarifies that he isn’t trying to

say that there isn’t any aggression involved, but that there’s also a spiritual quality to it. “Anyways,” he reverts, “Let’s smash the bag.”

Shipman’s concept of learning vocabulary and forming sentences of movement is familiar territory for a dancer. We might call it structured improv. Combined with Page’s affinity for flair, we start to see where our worlds cross. But Khan’s discomfort with the idea of brutality as entertainment is hard to shake. On that aspect, Page comments, “It’s quite a difficult thing on the eyes for the average person. But I’ve changed the narrative. Because there’s stuff that they can laugh at during it, through something that’s still brutal.” Page’s approach to fighting requires him to know his vocabulary, his techniques so well that he can break form to his advantage, and catch his opponent off-guard. That kind of creativity, of play, is yet more familiar territory to us.

So far, the discipline and the showmanship of fighting have clicked with Khan, but that blockade against physical violence remains. And how can he choreograph Brazier’s walk-out without understanding that most fundamental concept? Bringing what he’d learned back to Shipman, the fighter offers a little more insight on the concept of spirituality within violence. “We all have killer instincts” he says. “It’s just not much use to us in this modern day and age to exercise them.” Shipman points out that, despite Khan’s illustrious career as a choreographer, there’s no survival advantage to him being able to move the way he does, either. But that it’s still fulfilling. Citing Jung’s concept of the ‘shadow-self” (our subconscious urges not suitable for modern societal morality), Shipman continues “Violence gets used as a dirty word, but it is a part of who we are and there is a healthy outlet for it. A lot of bad comes from trying to repress a natural impulse.”

This clicks. While choreographing for Brazier, Khan learns that he is a Veteran, having done two tours in Afghanistan. When he returned to civilian life, Brazier had a difficult time adjusting, and MMA helped to, as Khan says it, “civilize his chaos.” After having been exposed to so much violence, having a controlled outlet in which he could vent it was a relatively safe, healthy option. With that philosophical understanding of violence and its connection to Brazier, all Khan was missing was his own relationship to it. Having been bullied for being an immigrant and a dancer as a kid, he still wasn’t sure how being the aggressor would help.

Which came while training with Shipman. Grappling on the ground, Khan straddles Shipman and is told to punch him, and keep punching, like he’d done with the punching bag earlier. While Khan could do it to the bag, a human is harder. But slowly, with a few light hits from Shipman to kick Khan’s defensive instincts into gear, he begins working through the technique, using the vocabulary he’d been learning to hit Shipman back. Khan says once he tapped into that, the violence went numb. “Afterward, I realized that’s the very thing I don’t like.”

But he was in touch with how to access that violence now. And with that, he creates a war dance reminiscent of the Mãori Haka for Brazier’s walk-out. Seeing dancers perform in an MMA arena, inhabiting and reflecting the brutality it embodies is a rare context. For a professional fighter to choose to have their violence represented in abstract through dance… Khan admits to the camera that a small part of himself feels like it’s a big, satisfying “screw you” to the bullies from his childhood.

“In a sedentary world, the joy of being purely physical is a liberation,” says Khan. “We all have aggression within ourselves. It’s how we act on it that differentiates us.” On stage or in the ring, we find a way to release our shadow selves, so that we don’t become the bullies in the schoolyard.

Extreme Combat: The Dancer and The Fighter is available to watch on All 4.