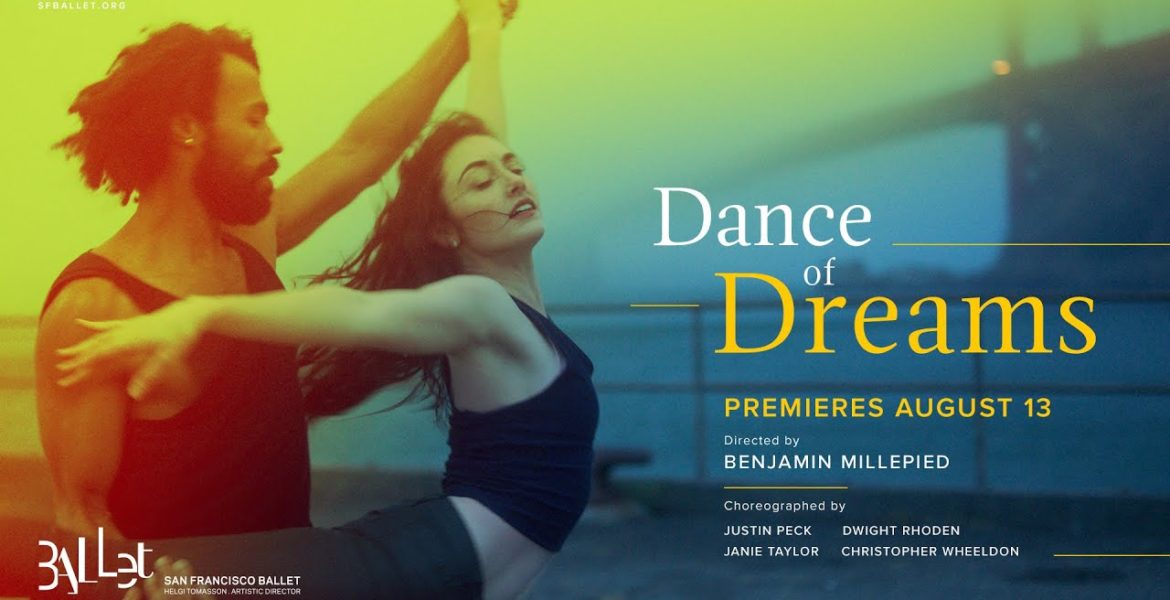 “The connection of this company to the people of San Francisco is so strong,” said Millepied. “It’s a die-hard audience. Dance of Dreams is a moment of dancing, a moment of reconnecting dancers to the city and the thing they love most.”

“Here in San Francisco, we’re still sheltering in place, and I wanted to explore new work under these circumstances,” said San Francisco Ballet Artistic Director Helgi Tomasson. “Dance of Dreams celebrates San Francisco, while giving our dancers the freedom to move outdoors in some of the most beautiful landscapes in the Bay Area, and with choreography by some of the finest choreographers of our time. Benjamin [Millepied] felt like a natural fit to direct this project. I am thrilled to be able to work with him in a capacity that integrates his background in film and cinematography with dance.”

Dance of Dreams offers a glimpse of San Francisco as the city enters its fifth month of shelter-in-place restrictions. The film is choreographed for six dancers, including solos for Principal Dancers Joseph Walsh and Frances Chung, choreographed by Peck and Taylor, respectively; and pas de deux for Soloists Ellen Rose Hummel and Daniel Deivison-Oliveira, choreographed by Rhoden; and Soloist Madison Keesler and Principal Dancer Benjamin Freemantle, choreographed by Wheeldon. San Francisco Ballet Orchestra Music Director Martin West mixed and mastered the recording, which incorporates more than 150 tracks recorded remotely by more than 60 musicians from the Orchestra. With this project, the company enters an era of unprecedented digital engagement via uncharted territories, grappling with what is lost while ushering in new future possibilities. Millepied and all of the choreographers generously donated their time, working remotely from their respective locales.

The film begins with Walsh on the grounds of the iconic San Francisco Art Institute in movements that suggest a yearning for what the past and future hold: community, connection and love. Shifting to an evening scene beside the Golden Gate Bridge, San Francisco’s foggy weather greets Hummel and Deivison-Oliveira, leading to Chung in solitude against the rugged shores of Sausalito. Among the swells and sonorities of Hermann’s “Scène D’Amour”, the film ends at the Palace of Fine Arts, a location featured in the film Vertigo. Keesler and Freemantle offer a closing pas de deux — an ode to perseverance through challenging times.

Social distancing rules were observed during the filming process, and the pas de deux are danced by dancers who have been sheltered in place together.

Millepied and Tomasson’s professional relationship began two decades ago at New York City Ballet (NYCB), when Millepied danced a principal role in Tomasson’s Prism as part of NYCB’s 2000 Diamond Project IV. Millepied began choreographing while at NYCB and created his first work for SF Ballet — set to John Adams’ “The Chairman Dances” — in 2017. He is now Artistic Director of L.A. Dance Project, and his career has expanded to include filmmaking; he founded The Amoveo Company, a multimedia production company, in 2012. For Dance of Dreams, Millepied selected the music and settings; Tomasson invited the participation of the four choreographers whose work the film features.

Dance of Dreams will be available to the public at 12pm PDT on August 13, on SF Ballet @ Home, YouTube, Facebook and IGTV.