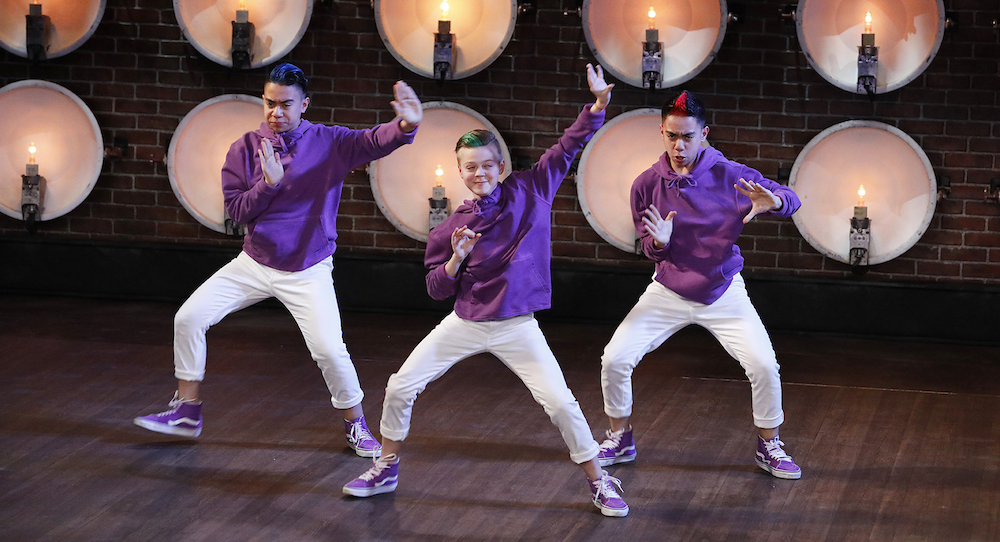 Season 4 of World of Dance has gotten off to an amazing start with some of the most innovative groups and soloists than seen on previous seasons. There has not been a shortage of amazing performances from all ages, but there is no denying the fire that comes from watching some of the younger performances that grace the World of Dance stage. Itty Bitty Crew, from Edmonton, Canada, is one of the many groups in the Junior Division that hope to wow the judges during this season. Dance Informa talks to twins Ethan and Ayden, as well as Dayton, about what initially brought them together and how they ended up auditioning for World of Dance.

“The members of Itty Bitty Crew first met two years ago after making a group competing at World of Dance traveling competition,” says Dayton. “Late last year, our choreographer, Vince Akinyode, decided to select us three boys to audition for season four of World of Dance on NBC.”

Having the chance to audition for World of Dance and ultimately compete on the show with some of the best dancers is something that dancers aspire to do. From the excitement of meeting those who share the same love of dancing to the exposure that competing on the show offers, the possibilities are endless. For Itty Bitty Crew, the idea of being able to share the stage with some of the best dancers in the world was too good to pass up.

“We love the show, and it is an amazing opportunity to dance with all of those dancers and in front of JLo, Derek and Ne-Yo,” says Ethan.

Dayton tells Dance Informa, “The main thing that sparked my interest in auditioning for World of Dance was how successful it has made people. There are previous contestants who have appeared on the show and have become famous and very popular. So, to think that I had the chance to dance on the same stage was crazy. Also, it is very exciting to think that I would be judged by Derek, Ne-Yo and JLo.”

With a sound group put together, Ethan, Ayden and Dayton set out to train and prepare for what would be one of the best opportunities they could experience. This would not be possible, of course, without the push and faith of their choreographer. Itty Bitty Crew credits Akinyode for keeping that drive and focus on the competition and showcasing what they can do.

“Vince pushes us so hard, challenging us and making us the strongest dancers we can be,” Ayden says. “He is always giving us creative and hard choreo to show how good we truly are, and we hope we make him proud of how hard we worked showcasing his amazing choreography in front of the world and every time we step on that stage.”

Itty Bitty Crew brings a style of hip hop that they describe as “raw street” style. They bring a high energy to the stage that can’t be matched, which is amplified by Akinyode’s knowledge of what each dancer brings to the table in their own style. While they promise to bring a style that is always different yet exciting to watch, Itty Bitty Crew has so much more that they hope to bring to the World of Dance stage that differs from the other competitors.

“Itty Bitty Crew brings many things to the stage that differs from other acts,” says Dayton. “One is that we are Canadians. Canadian dancers are often viewed as not as good as some of those who live in places like the U.S. Our crew is able to showcase strong dancers from Canada who can prove that stereotype wrong. Also, being a group of younger boys, they wouldn’t expect much coming from us, so we hope to show the audience how strong and determined of dancers we are.”

Chiming in, Ayden says, “We are super shy and quiet, but when we hit the stage, we turn into beasts!”

Although the journey performing on World of Dance has just begun for Itty Bitty Crew, one thing is certain — all three members are hoping to grow from such a rewarding experience. Being granted such a surreal opportunity at a young age has them looking forward to future endeavors as a group even after the competition.

Ethan says, “We hope to make it as far as we can and enjoy the process.”

“My hopes for through the competition process are to mainly look forward to all the opportunities and doors it will open for my future,” says Dayton. “I want to make sure I continue to work hard so I can continue dancing with Ethan and Ayden and take on many more adventures and life-changing possibilities with them.”

Check out all of the amazing talent on World of Dance Sunday nights at 10pm EST. You won’t want to miss it!