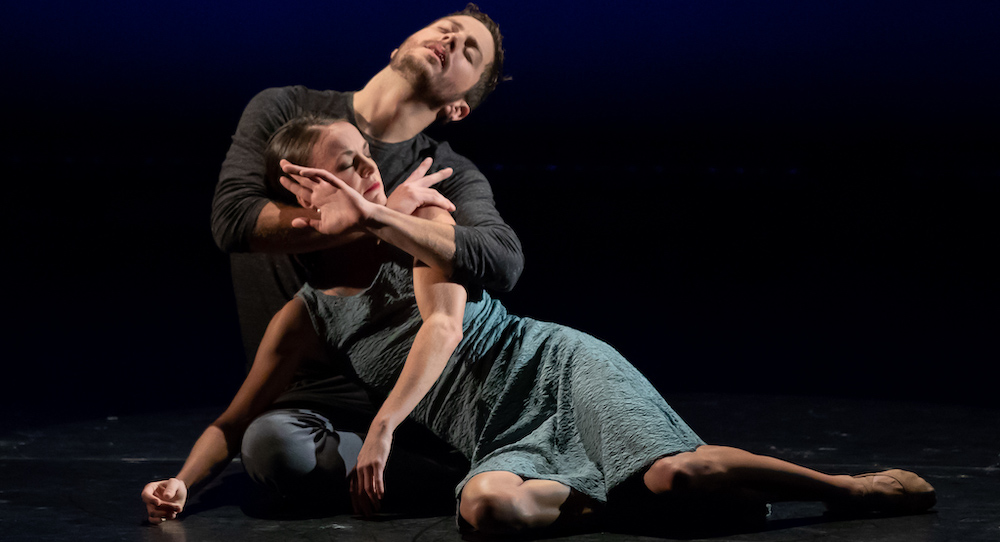 Newport, Rhode Island’s premier contemporary ballet company, Island Moving Company (IMC), has always been inventive and resourceful; without a consistent “home-base” theater; the company has performed in spaces from old military forts to pirate ships to former Quaker meeting houses. With the dance world facing the hard necessity of cancelling or postponing rehearsals and performances, IMC decided to make certain past performances accessible to anyone online for free. In the first three weeks of April, the company has offered a curated set of performances on its website.

The name Great Dance in Great Places is somewhat self-evident, yet also alludes to the company’s longtime summer Great Friends Dance Festival (now the Newport Dance Festival). The festival has had an aim of connecting dance artists and enthusiasts from around the Northeast, around the country, and around the world — for collaboration, support, and more. This current online festival can accomplish some of the same meaningful ends in the age of mandated physical distancing. One weekend of the online festival features performances from the Great Friends Festival, while other weekends feature performances from Providence, RI’s Vets Auditorium and Pittsburgh, PA’s New Hazlett Theater.

IMC Artistic Director Miki Ohlsen’s Kindred kicked off the first weekend (videography by Arvid Tomako), danced in Pittsburgh’s New Hazlett Theater. Two spotlights rose on two different dancers, Katie Moorhead and Gregory Tyndall. They began to move with clear gesture, shape, and line — emphasizing tension and then release with breath. It was unclear as to whether or not they saw each other. Depending on the viewer, the ambiguity could have been enticing or it could have been frustrating. As the spotlights faded and the whole stage became illuminated, the dancers’ gazes then made it clear that they could see each other. Tyndall danced over to Moorhead as she remained on the ground, gesturing toward and away from her. There was a magical fairytale feel to it all.

Moorhead curled into herself, as if in self-protection, then reached her body long as he turned away. I thought of missed connections between people. This choice reinforced an effect from earlier in the piece that began that theme of missed connections, them facing in different directions and seeming to just miss each other’s glances as they looked upstage or downstage. Yet she soon rose and leapt into his arms, and they shared a tender embrace. At the same time, a tension in the music implied that something threatened their connection. Movement vocabulary in the work helped create this feeling of tension between connection and something that might threaten it.

Such as with Moorhead lengthening legs long and then curling them into a double attitude shape (both knees bent), expansive and free shapes flowed into something more shaped and gestural. Arabesques and arms swaying side to side spoke to yearning and reaching for those connections that they missed. At one point their unison was off on a jump but right together on a following turn, making the unison when they got it more powerful. A memorable moment had Tyndall in Moorhead’s arms, as if rocking him, an image of parental or simply very human caring. The two dancers, their relationship platonic or romantic or of siblings or of a parent and child, embodied a bond that can last between two people even when they lack connection to one another in literal space — a powerful and prescient portrayal indeed. They were kindred.

IMC Associate Artistic Director Danielle Genest’s Transport, the second piece in the first weekend of curated performances, was a work that could similarly subtly speak to humans in community — tension and harmony in opposition to ultimately bring balance. Also notable in this work was varying tension and harmony between the qualities of music and that of movement. The work began with dancers walking to a formation, a clump, and facing out to the audience — confrontation. The lighting low, music began also understated — they reached low with legs and ever so slightly shifted in space. The music (by Olafur Arnalds) built in volume and intensity, escalating drama and mystery; the dancers’ movement was still small, still within the dancers’ kinespheres.

The dancers soon moved to a tight diagonal line and began thrashing wildly and expansively. The disconnection and isolation inherent in this movement contrasted the unity of the dancers’ proximity in space. With an explosion in the music, the dancers in turn exploded out across the stage The movement was athletic and expansive, with gesture peppered in to create something not quite definable but beautiful. There was a clear tension between the action that is organized chaos and the connection at hand, such as dancers when dancers rearranged formations to move together in pairs. In these pairs was striking partnering work — such as dancers behind their partners enfolding around arms extended to the side, offering a sense of structured support.

Their costumes of simple tunics allowed their movement to take center stage. Bands of light across the stage added to the aesthetic wonder, dancers moving through this light and shadow. Simultaneous duets and solos created a number of different stories onstage — offering endless narrative possibilities, containing multitudes of human tales. In one of a few clear energetic shifts, another energetic shift had accented gesture moving the dancers into a group section. It felt like community was found. To end the work, they moved back to a line, gesturing to each other, and then turned to the audience to gesture to us. This choice felt like a call to us, to question for ourselves how our own stories will go forth.

The second weekend’s curated lineup included Ohlsen’s La tierro gira.  The title translates from Spanish as “the earth rotates”. As such, there was a sense of spiraling all throughout the work — beginning with the work’s start of a large ensemble spinning in and out of formation. A memorable image here was arms from an inner circle fanning past out an outer circle, like a flower. Costumes (from Eileen Stoops) were in a dark blue and black color scheme, in simple, clean cuts that complemented the movement at hand. Before too long, most of the ensemble cleared the stage, and a pair remained.

A duet with a high level of passion ensued, with a strength yet a folding to the movement quality. A pliability was at hand. The shapes really went to their limits, with a high attitude and deep backbend as motifs. Innovative movements such as a leg looping through the other leg to end in an arabesque, while supported by a partner, were eye-catching and conveyed complexity; I thought about having to dance a fine line between imperfect outcomes. Two other dancers entered, allowing for many visual and energetic possibilities and opening up the experience portrayed beyond one couple. A notable image here was the ballerinas spinning low with both legs bent in attitude; the pairs had the intricate physics worked out such that this movement sequence flowed seamlessly.

An ending section had the ensemble back on, dancing variations on a compelling phrase including a leap with knees bent progressing into a turn with one leg extended long and low, lines and spirals pleasantly blending but intriguingly distinct. Throughout, the score (from Kevin Keller) added further drama to the work’s sense of spiraling and the emotive atmosphere of both the ensemble, duet, and quartet sections. This drama at first didn’t grab me, I didn’t quite understand the stakes. Yet towards the end, I suddenly understood the powerful drama — two into four people’s unique experience playing out while the world around them revolves, all of the people around them with their own stories, the streets filled with joys and heartbreaks that are invisible to our naked eyes. Somehow, with a million choices adding up, two people and two sets of two people came together amongst billions of other humans just like them.

The light suddenly cut out to end the piece, and something in me wanted a smooth ending to let the drama come full circle and tie off in a neat package. Yet cutting out quickly presciently underscored how such stories playing out besides millions of other stories on this earth will continue as long as this earth rotates and we are alive on it. IMC’s website included this poetic quote along with program information on the site: “the earth turned to move us closer, it spun on itself and within us, and finally joined us together in this dream….”. Such meaningful metaphor and story are available to us through art. Dance companies such as IMC are doing their part to ensure that even while we physically distance, we continue to have access to it.