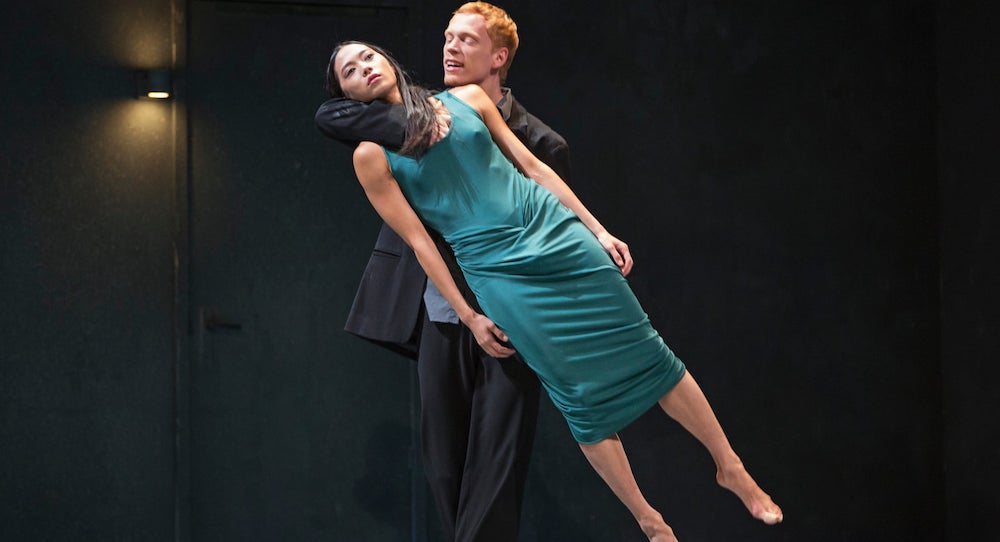 The Missing Door opened the show with robust artistic vitality and experimental choreography that the rest of the evening proved unable to live up to. The piece begins with what looks like an ending: a dead woman splayed on the floor followed by an attempt to clean up, to reset. Humor quickly overtakes the gravity of what must have passed before when an unwieldy hand-towel wrestles with the suited man holding it and he begins to whirl out of control, spinning on his knee with the speed of an Olympic ice skater.

Enter a maid with an armchair, completing the nearly monochrome set of gray doors, windows and sconces broken only by a yellowing lampshade reminiscent of an eerie hotel. Accompanied by an ominous, droning soundscore, the set is used ingeniously throughout the piece; dancers glare through the smudged window as scenes unfold, greedy fingers ooze through door jambs, and looming shadows paint the walls. A powerful industrial light on wheels also comes and goes from the set, entrancing and blinding dancers and audience alike, and occasionally infusing the soundscore with its buzz.

Comedic highlights depend largely on easy things made difficult: the light made heavy, the mundane reinvented. One dancer can’t seem to remove his coat and an extended struggle builds between him and the unruly garment. Another dancer can’t walk in heels and the audience half cringes half laughs as she rolls her ankles over and over again, fumbling toward a man who guides her with open arms like parent teaching child to walk or swim.

Other comedic moments include dancers being knocked out by doors as they swing open, a sudden gust of wind sweeping crumpled papers across the stage and nearly blowing the cast away, and a particularly riotous illusion in which a female dancer seems to control the creaky opening and closing of various doors with her heeled leg, which is vertically extended as she sits in the armchair.

Most hilarious and impressive are the vignettes where the set shakes and the dancers react exactly to both the rhythm and intensity of the shaking, which is initially caused by a tussle with an obstinate key. As they lose control, the set seems to quake of its own fruition. During one such vignette, shakes devolve into diced dialogue: “m-o-t-h-e-r-f-u-c-k-e-r”.

For all its humor, The Missing Door is decidedly a dark and emotionally loaded piece. From a rapey duet with male grabbing female by the crotch, creating the ghostly outline of a phallus beneath her flowy teal dress and controlling her like a doll, to the sound of menacing laughter and spot-lit weeping, to a physically abusive finale in which the set begins to self-destruct as the relations between the dancers do, Carrizo is clearly after something much more than trivial laughs and flashy violence. In describing her work, she says, “I constantly try to look for new perspectives to make the parallel mental world visible; a world in which hyper individual fears, oppression, fantasies, and thought constructions of the characters and artists break into a regular social relationship.”

When the piece ends with a return to the initial image, we are confronted with an unavoidable question: is this a cycle? And further, what will be different the next time around? What is the cumulative impact of all this damage? As we ponder these existential questions, a moving spotlight catches each dancer off guard for bows, one by one, and we are temporarily soothed by the delightful protraction of a world we are only beginning to come to grips with.

Next in the program was Goecke’s Walk the Demon, which used music by various artists and featured the sweeping vocals of Antony and the Johnsons. While both music and movement could have worked on their own, they didn’t quite seem to fit together. The generic flowy love song contrasted with the lightning fast, inhuman movement in a way that seemed unintended and ineffectually jarring.

Smoke languidly vacates the stage at the start of the piece, and the Mach Five movement vocabulary is immediately established and remains remarkably consistent throughout. Envision razor sharp, needle thin gestures. Now wipe away all reverberation and gush. Replace it with geometry, with bladed and clawed hands and contorted faces and slicing back attitudes, with front-facing skewed formations and unison animalism. Even breath is synchronized.

Add to that portentous whispers, shrieks in foreign languages, a yelling exchange, and (unfortunately) random hugs and spastic feigned kisses. “All life and love is a thank you, hello, and goodbye… Everything is new,” or so say the dancers. We also catch glimpses of an obscure figure – a man in a gorilla suit? – crawling in the background. The Demon himself? How does this symbol and this language fit in with the rest of this mismatched world? We are given few clues, left to grope for our own conclusions.

The army of dancers are indisputably impressive, and along with providing corporeal proof of the weight of speed – of speed’s power to overtake originality of movement, to make even the most basic choreography look interesting (though the vast majority of Goecke’s choreography is by no means basic) – they are the best thing about the piece. Despite the astonishing skill of the dancers and the impossible movement-per-second ratio they are readily able to maintain however, a sigh of relief washed over the audience when the piece, which had considerably overstayed its welcome, finally ended.

The final piece, Shut Eye, completed the downward spiral of the program. Apparently led by the quote, “I shut my eyes in order to see” by French visual artist Paul Gaugin and guided by questions about the nature of perceptual and emotional limitations (ambiguously worded in the program to make sensation and emotion falsely seem mutually exclusive), León and Lightfoot’s piece came off as a meaningless garble of monotonous virtuosity. The “symbolic meanings behind the dynamic use of black and white, the respective light and shadow” looked a whole lot like unmotivated technical choreography staged on a clever set with pretty dancers and an awesome lighting designer.

The piece begins with a moon projected on a dark set, which centers on a door from which dancers in gendered formal wear come and go. The choreography relies heavily on partnering and primarily consists of wide, sweeping movement – a stark contrast from the previous piece – from which technical elements regularly rear their head, sometimes seamlessly, other times inharmoniously, nearly always with questionable artistic import. The most memorable motif is remembered for its cheesiness: a point, sometimes accompanied by an exclamation, “There!” The clichéd vocabulary is one of pointed feat, slow motion walking, and shadow play, and there is little to no chemistry detectable between the dancers.

According to director Lightfoot, the unifying element of the City Center program was a focus on dance as an art beyond entertainment: “There are deeper poetic messages in all the pieces.” For a program making this claim, outside of the genius of The Missing Door, it all seemed pretty entertainment heavy to me. I left with the overwhelming sense that it was all just a dance. A bid to continue filling seats. I’d be happy to be proven wrong.