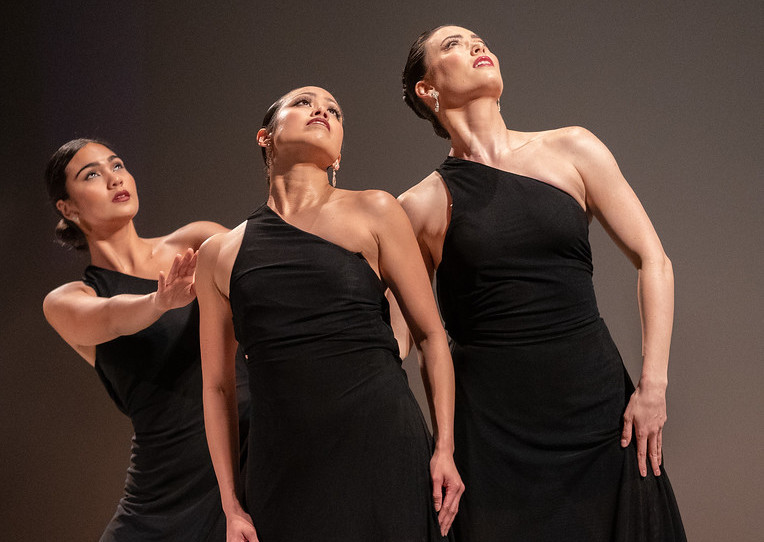 Resistance can come in the form of quiet, graceful strength — in persistence, resourcefulness, and grit. There can thus be harmony and grace in fighting injustice. These traits shine through the life of Marian Anderson, someone I didn’t know of until learning about this performance. She was the first major African American opera singer to gain prominence in this country. The road there wasn’t anything like easy; she faced incredible racism, to the point of being denied access to several performance venues. She never let that get that in the way of doing what she loved and sharing her talent, however.

For instance, when disallowed from performing at a prestigious venue in Washington D.C., she sang on the steps of the Lincoln Memorial — “My Country T’is of Thee,” no less. The symbolism here is striking and powerful. Dana Tai Soon Burgess Dance Company (DTSBDC) portrayed it, along with Anderson’s graceful, persistent resistance, with clarity and command. Burgess’s signature movement style, a beautifully released form of classical modern dance — along with building of a clear, evocative atmosphere — all helped build that portrayal.

The Washington D.C. based company’s mission is to “create and perform new modern dance choreographies that explore personal and cultural histories…[that] illuminate the basic experiences, needs and aspirations that are integral parts of everyone’s life.” Burgess is the Smithsonian’s first ever Choreographer in Residence. He created this work as a response to the exhibition at the National Portrait Gallery honoring Anderson, “One Life: Marian Anderson” (2019, curated by Leslie Urena).

A feeling of harmony, poise, and deference was evident from the very beginning; a black and white image of Anderson in lovely long black dress filled the stage as a preset. A singer, Millicent Scarlett, entered. Her voice was full and deeply resonant, offering “My Country T’is of Thee.” Jeffrey Watson accompanied her on the piano. Dancers circled around her, moving in canon. Some walked with presence and some danced more technical steps, adding an element of opposition to make the harmonic feeling more dynamic. Brahms compositions accompanied them as they danced.

The dancers soon paired off for more ballroom-inspired movements and classic modern dance moving pictures, all of which were memorable. A woman lunged forward and a male partner took an arabasque behind her, creating feminist imagery that warmed my heart. A lift over a hip into a turn became arms lowering, the pair’s hands slowly meeting. A technical moment moved into a satisfyingly clear and simple one here, one of poise and deference.

This sequence came back at certain points, becoming grounding in its repetition. This sequence, and other movement phrases repeated in the choreography, didn’t become stale because nuances within them were fresh each time. This approach also created an embodiment of the bridge and chorus repetition in the music, all relating to the subject matter at hand, as I saw it — persistence, grit, and a quiet strength.

A duet narrowed down the experience portrayed to that of a group to that of two people. Subsequently, the movement felt deeper and more overtly relational. A trio of women followed, softer and more feminine in movement quality. A lovely image of enveloping arms while dancers stood in a line was aesthetically pleasing, as well as offered a heartwarming sense of support and connection.

A duet to follow that delved into the more tumultuous side of romance, it seemed. Grounding deep into plies felt like taking a stand in one’s will. Moving toward and away from each other in space felt similar. It made me wonder what more of that deep grounding could have brought in other parts of the work; the energy at hand was rather vertical and lifted through much of it. Granted, that lifted quality felt part of what built that sense of dignified, quiet strength that came across.

Later on in the work was a pause in the singing, perhaps might have brought effective contrast if also done earlier in the work. On another auditory note, I could hear the dancers’ feet gliding, making their smooth movement of overcurve and undercurve more visceral and pleasantly experiential for me. Also bringing me into the work was a classic and dignified aesthetic. The lighting was in a simple, yet evocative yellow-gray. Costumes were black and elegantly cut (by Sigrid Johannesdottir). It all created something that felt like a moving black-and-white photo.

Later group sections shifted into something like the opening, circling and movement like a waltz. It was more expansive and technical, however, with legs scissoring through the air in lifts and clean battements to the side (stable and clear rather than head-high, quality valued over superhuman flexibility). Millicent returned to sing “My Country T’is of Thee”. Lights lowered on a tableau, the dancers turning towards that same elegant image of Anderson. It felt like a cogent, wonderfully-crafted honoring of a woman who dealt with injustice and prejudice with persistence, integrity, and grace.