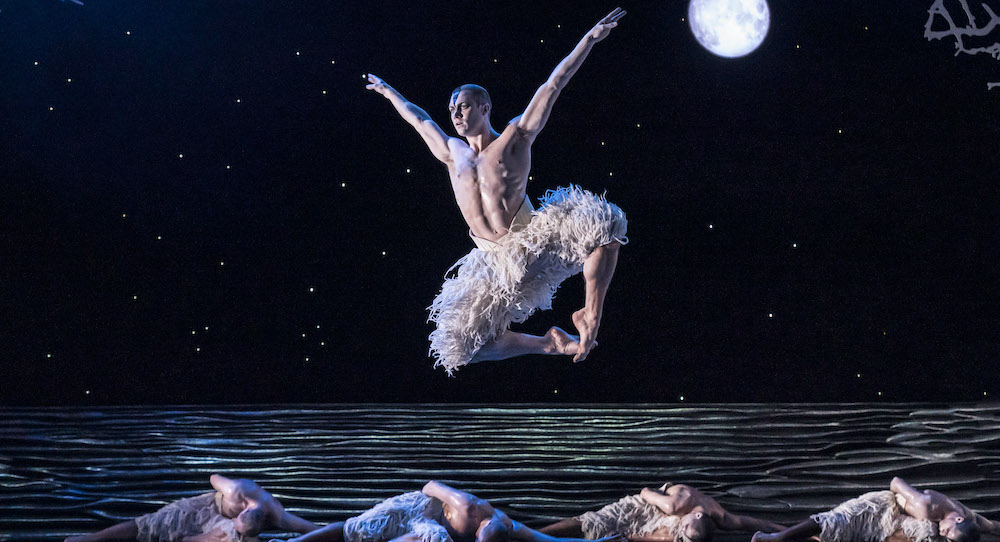 Just last January, I made my way to the Kennedy Center to see Matthew Bourne’s Cinderella, and I wondered aloud in my subsequent review if I would ever get to see his legendary swans on stage for myself. At the time, I had no idea that the 2018 revival of Bourne’s Swan Lake would be coming to D.C. this winter. In 1995, when I was still a teenager with feathery tutu dreams of my own, the original production opened in London, and  Bourne’s now famous flock of male swans thrilled and shocked audiences from the start. Since then, his swans have become a worldwide sensation, and yet there remains something still very fresh and provocative about the image of his crew of bare-chested swans in wild feathery pants. Having waited 25 years to see them for myself, I walked into the theater tonight a bit doubtful that the show could live up to my high expectations, but I am delighted to say that it was very bit as delicious as I hoped it would be.

The show opens in the Prince’s bedroom, which is an opulent, cold space dominated by a large, over-sized bed. Sleeping but obviously having a nightmare, the Prince flails and tosses about as we get our first shadowy glimpse at Bourne’s iconic Swan. When the Prince wakes up, the Swan vanishes, and the Queen soon enters to check on the Prince. She offers the distressed Prince no comfort or affection but rather seemed annoyed with his vulnerability and rejects his appeals to stay with him. Not alone for long, the Prince is quickly surrounded by a smartly dressed army of maids and butlers who dress, buff and brush him with mechanical precision until he is presentable for his royal duties. The immensity of Lez Brotherston’s sets make the slim, miserable figure of the Prince seem even smaller and gives one the sense that he feels suffocated by the edifice of his privileged life.

Despite the weight of these opening scenes, Act One is also full of hilarious bits that parody the drama of modern royal life, complete with an adorable mechanical dog that trots across the stage perfectly in time with the music. Eventually, we also meet the Prince’s highly unsuitable girlfriend who looks and acts like a stereotypical American cheerleader with bleach blond hair, a too short skirt and a “friendliness” that the Queen finds appallingly undignified. The Girlfriend, as performed by Nicole Kabera, is perky and sweet but completely clueless about how to behave like a royal. She smiles too much, plops down in her seat when the Queen is still standing and even answers her cellphone when she accompanies the Royal Family to the Opera. Kabera performs the role with the perfect amount of ridiculousness and sincerity that keeps the audience laughing at her but also sympathetically rooting for her at the same time. That is, until the Prince follows her to a seedy club called the Swank Bar, where she snubs him and appears to take a bribe from the Queen’s Private Secretary.

Drunk and disillusioned by his experience at the Swank Bar, the Prince then stumbles into a city park and seems intent on plunging himself in the lake when he is surprised by the appearance of a the Swan. Max Westwell as the Swan is a striking sight with his wild, dark eyes and muscular form clad only in those signature wispy feather pants. The lithe Prince seems fragile, almost frail, in contrast to the Swan’s power and ferocity.  The unfolding drama between these two men is gorgeously crafted with soaring leaps, tender partnering and perfectly matched lines. Westwell and Lovell’s duet work is intimate and vulnerable and beautifully articulated in a way pays homage to the best of classical ballet’s Grand Adagios but with more raw emotion than the usual fare. Of course, they are not on stage alone but rather surrounded by a flock of 14 other swans who are as alluring as they are intimidating. The usual swan tropes of fluttering arms and weightless bourrées are replaced with undulating torsos and amazing aerial work. The famous “little swans” variation was one of the surprising highlights of the ensemble work in Act Two. Danced by four petite young men, the choreography evoked the lightness and crispness of the traditional Ivanov choreography but with a sort of hip hop edge and a wicked sense of humor. They were great fun and definitely a crowd favorite of the night.

After the intermission, we are transported back to the palace, outside the gates amidst the flickering flashes of paparazzi and the jostling of a starstruck crowd. Seven European princesses and their escorts arrive for a royal ball and strike a pose for the cameras before passing out of sight. Each princess is distinctively dressed in a spangled, black gown or sleek, sexy pantsuit with the male escorts sporting black suits and tuxes with contemporary styling. Joining the illustrious guests is the ditzy American girlfriend sporting her biggest pageant girl smile and a painfully short bubble dress. The young prince and the Queen Mother, in a crimson embroidered taffeta gown, enter with the expected royal fanfare, and then the party heats up fast. With the full ensemble coupled up, the first of the series of court dances begins. The choreography ranges from a bit cheeky and flirty to unabashedly sensual with both men and women accenting the usual waltzing and posturing with a taunting, hip-thrusting action. The whole spectacle was thoroughly enjoyable, both evoking and poking fun at the glamour and excess of red carpet events.

When Westwell enters as the Swan’s alter-ego, the Stranger, the action turns almost savage. He greets the Queen by licking her arm, smacks his crop threateningly at all glittering guests and then settles into the fun of seducing the women while the Prince looks on horrified. Westwell was stunning as the Swan, but he is practically intoxicating as the Stranger. I couldn’t help but marvel at the ease with which he commanded the entire room. The sexual tension among the performers was electric throughout Act Three, and there were many moments when the audience seemed to be holding their breath, waiting to see what deliciously brazen thing the Stranger would do next. If Westwell was a movie star, instead of a ballet dancer, his performance tonight might have garnered him a mention in People Magazine’s annual sexiest man alive issue. Maybe dance audiences should start a write-in campaign.

Even though the Stranger was understandably the center of attention, I was impressed with how each princess commanded the stage and matched Westwell’s powerful form he danced with each in turn. It was really refreshing that none of the princesses were cast to play the victim to the Stranger. These women were all mature, confident and relished the game of pursuing and being pursued. In this scene, I was also struck by how having a large ensemble of young men — instead of the usual sea of young women — created a new, liberating dynamic for the female soloists. Choreographically, they were treated as featured male performers are in classical ballets, always free to interpret ensemble work as an individual and never asked to slip into the background as just another nameless pretty face.

I don’t want to give away too much about the ending, which was full of surprises, including a bizarre scene in an insane asylum with a creepy Clockwork Orange feel to it. Suffice to say, the Prince is a tormented figure to the very end, and his love for the Swan leads to both his tragic demise and his final redemption. The swan ensemble work in the final act is even more impressive than their tour-de-force in the second act. All 14 men repeatedly make impossibly difficult running leaps on to and off of the Prince’s towering bed as the work descends back in the realm of nightmare.  I don’t think it is possible that I will see another performance this year which will surpass this one in its attention to detail or its sheer athleticism. Hopefully, you won’t have to wait 25 years to see Matthew Bourne’s Swan Lake, but, if you do, I am confident it will be worth the wait.