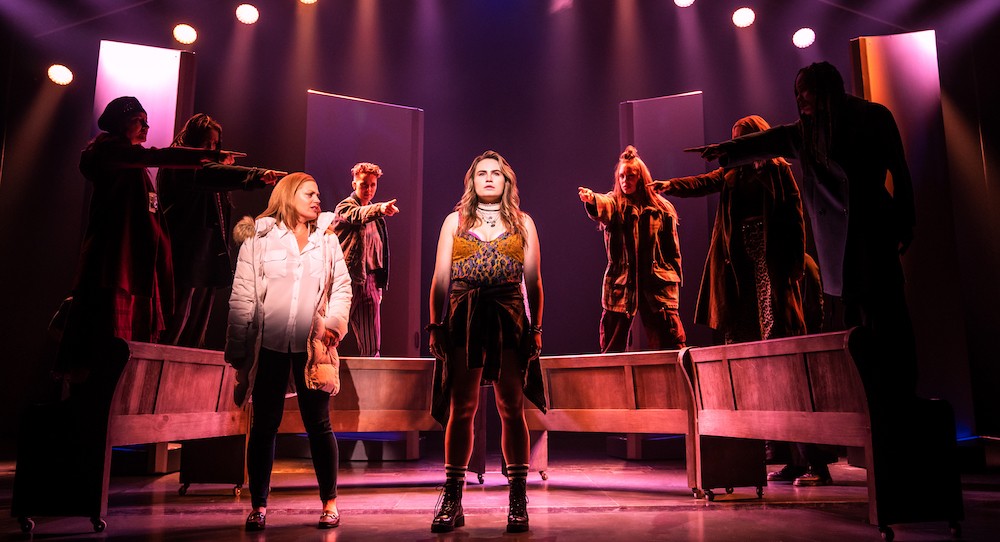 A jukebox musical tends to fall into one of two categories: telling the life story of an artist with his or her music woven into the chronology (Beautiful, Jersey Boys) or utilizing an artist’s songs to create an entirely new story (Mamma Mia!, Escape to Margaritaville). Jagged Little Pill (JLP) falls into the latter group, although it’s a far cry from the hopeful journey and happy ending of Mamma Mia!. JLP incorporates the music of Alanis Morissette (already quite a bit more complex and confessional than that of ABBA) to tell a dozen intermingled storylines each more screwed up than the last. You’ve got just under three hours to try and untangle a drug-addicted tiger mom, her rebellious bisexual adopted daughter and her perfect son whose one wrong decision turns his fairy tale life upside down. Oh, you’ve also got other issues including sexual assault, betrayal, gender identity, mental health, infidelity and repressed trauma. Needless to say, there’s a lot going on in this show. Surprisingly, the craziness all works, although no storyline gets the full attention it really deserves.

How does one create choreography to the moody, rock ‘n’ roll and magically dissonant music of Alanis Morissette? Three words: Sidi Larbi Cherkaoui. JLP might be this Belgian choreographer’s Broadway debut, but his dynamic, honest and sometimes aggressive movement is some of the most organic, raw and captivating I have ever seen on a Broadway stage. The choreography seamlessly fuses African dance, contemporary fluidity, hip hop motifs, voguing, pedestrian movement and even stepping. The ensemble pops in as secondary characters throughout the show, but they also collectively embody the principals’ emotional states. You often wonder if the numbers are improvised because the movement seems to come so deeply from each dancer’s guttural core. It’s wild and unrestrained yet paired with impeccable technique. Two particularly memorable moments are Heather Lang’s hauntingly beautiful physicalization of a drug overdose and the full ensemble’s vibrant rampage to “You Oughta Know”, which receives a standing ovation mid-performance. The leads are tremendous with voices that can all hit (and also personalize) Morrissette’s iconic score. The ensemble, however, is reminiscent of the original cast of Hamilton – unshakably invested in every moment and every movement. (Dear Chita Awards — We’ve got some strong contenders in this show!)

JLP actually reminds me of Hamilton in another way. There is always so much going on – overwhelmingly so. Sure, go see JLP for the Alanis Morissette music you used to blast in your Jeep after your first break-up. But beyond that, go see JLP to experience a completely overwhelming night at the theater. You’ll need a day to process it all…and like I said, it’s a lot. And, how wonderfully refreshing to see a Broadway show that shakes you, that makes you pause and think before you dissect its feats and flaws with your friends (or on your social media), and that overwhelms you while also making you realize the power of just two hours and 45 minutes of live theater. “The moment I let go of it was the moment I got more than I could handle. The moment I jumped off of it was the moment I touched down.” Thank U.