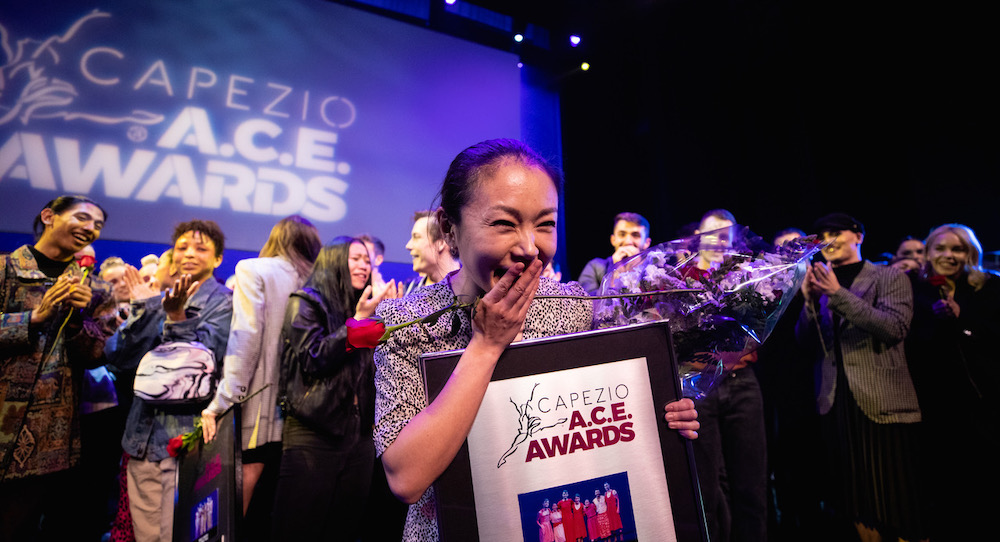 The Capezio A.C.E. Awards crowned a 2020 winner at last night’s ceremony that played to a packed house at the historic Montalbán Theatre in Hollywood, as part of the MOVES at The Montalbán dance festival produced by Break the Floor Productions and presented by Capezio.

The winner of the 2020 Capezio A.C.E. Award for outstanding choreography is choreographic team Grayson McGuire and Shiori Kamijo. McGuire and Kamijo will receive a cash prize of $15,000 to be used toward the production of their own show at next year’s MOVES at The Montalbán. The runner-up for this year’s award, and the recipient of a $5,000 cash prize, is Noelle Marsh. There was a tie for second runner-up, each receiving $3,000, between Sarah Steben and Brandon Croisetiere.

Hosted by hip hop legend Kenny Wormald, the esteemed judging panel included such dance industry icons as Anita Mann, Marguerite Derricks, Ray Leeper, Vincent Paterson, Tony Selznick and Tessandra Chavez. Capezio and Break the Floor would like to thank all 26 choreographer finalists and their amazing dancers for competing in this year’s awards.

McGuire, originally from Kansas City, and Kamijo, born and raised in Japan, have worked in the commercial dance industry in Los Angeles together for the last eight years. They’ve danced together with Entity Contemporary dance and for artists such as Lady Gaga, Mariah Carey, Nicki Minaj, Banks and more. They have been choreographing together for the past couple of years, most recently presenting Boots at the Palm Desert Choreography festival in 2019. They have taught all around the world at intensives in Hong Kong, Singapore, Mexico, Japan and around the United States. Their choreography is versatile in movements of contemporary, hip hop and ballet to provide for a groovy yet technical experience.

At this year’s MOVES at The Montalbán festival, last year’s Capezio A.C.E. Awards winners presented their work. Erik Saradpon debuted his FORMALITY LIVE!; Mary Grace McNally brought her new full-length work, When it Falls; and JA Collective debuted an excerpt from its new show before Rudy Abreu’s The Overthinker was performed.