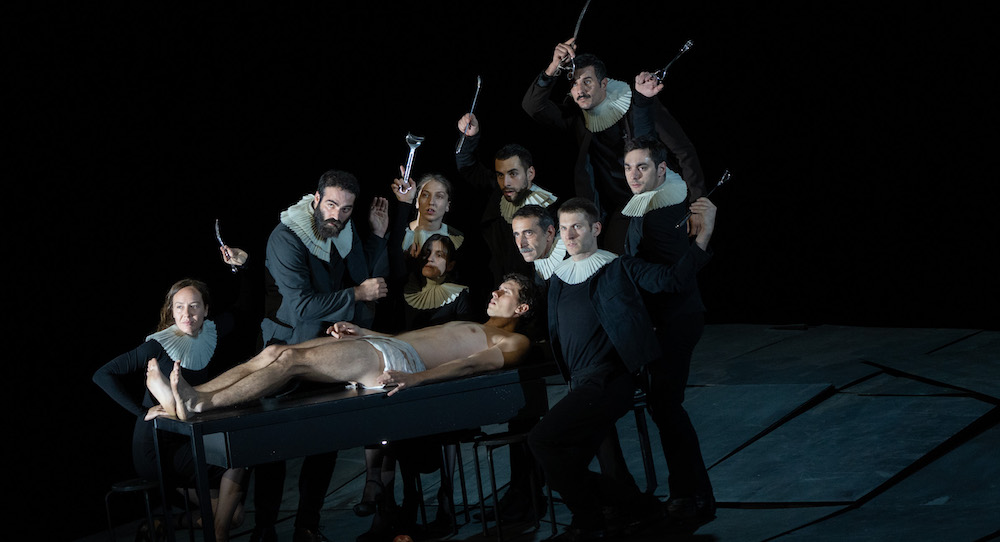 The Great Tamer made its New York debut at Brooklyn Academy of Music’s Howard Gilman Opera House as part of the Next Wave Festival on November 14. The work was created by Dimitris Papaioannou of Greece in 2017, and is currently on an international tour.

Papaioannou was born in Athens, and has his artistic origins in painting and comics. He’s directed nearly any kind of show you can imagine, including the opening and closing ceremonies of the 2014 Athens Olympics.

The Great Tamer begins with a man in a gray-tone suit, statuesque on a roof-like, paneled stage as 2,000 people file into the sold-out theater. As the late-comers scuttle to their seats, he unties and removes his shoes, and less than a minute later is completely naked, lying prone with feet toward the audience.

A second man covers his bare body with a sheet, and a third lifts an adjacent roof tile, dropping it so that the sheet flies off. The second man replaces the sheet resentfully and the audience begins to laugh, already piecing together the first puzzle in a series of puzzles that effortlessly align over the course of the piece. Five minutes of accelerating covering and uncovering go by, and we are reminded of a relentless alarm clock waking us for yet another day of the same routine. The Great Tamer’s (tasteful) macabre shock value makes even predictable moments like this one feel satisfying rather than tedious.

Enter Strauss’ “Blue Danube”. As the music builds, a series of overlapping vignettes unfold: roots growing from shoe soles, a woman balancing a plant on her head, two men precariously stacked on a small stool and more. Through seamless dressing and undressing, we are presented with a jigsaw of limbs, and often lose track of where one body ends and another begins.

Additional highlights include heavy-breathing astronauts, dismemberment, trust falls on stilts and surgical procedures with cannibalistic implications lit by candelabra. The power in these conceivably grotesque vignettes is their ability to transcend disgust through humor, despite the apparent earnestness with which they are performed.

In most instances, The Great Tamer feels more like performance art than dance (although of course this distinction is a point of contention for at least some people), but there are two undeniable moments of bona fide dancing. In the first, a slinky turned snake leads the dancer, inviting slithering sequential movement.

In the second, a woman stands atop a pot, arms undulating with the same quiver as the Dying Swan. Her skin starts to shed and the others are greedy for it, alternating between plucking her petals and blowing party horns. In this scene, the elephant in the room – sexual tension – is finally addressed, which feels necessary but not overemphasized.

Another highlight comes when a man suddenly appears in a full body cast propped up by a crutch. He limps slowly toward a second man who is motionless, watching him approach in a kind of sentimental power play. The second man breaks off the other’s cast piece by piece, and the crumble of plaster fills the hushed theatre as it hits the floor. They exchange a symbolic handshake and the freed man walks away, glancing over his shoulder as a reminder of the ephemerality of even life’s most profound moments.

Toward the end of the piece, we see an exact replica of one of the opening images, but with subtle signs of what’s transpired. The shoes planted downstage center are coated in plaster, an orange peel wafts its enticing aroma into the audience, and splatters of water from a hidden stream stain the panels.

In a haunting climax, a naked man narrowly escapes dozens of arrows that fly across the stage. As the arrows settle, they transform from malignant weapons into a serene wheat field. A cyclical tower of naked men in stacked bridges emerges, their upper bodies hidden so we see only a conveyor belt of penises.

In the finale, the man from the opening scene sinks like quicksand into the roof and a skeleton is lifted out of the ground to fill his (non-metaphorical) shoes. The bones tumble to the floor in slow motion and after an initial jolt of hilarity, the mood is deeply melancholic. The large book that’s been sitting in front of the stage is given its final meaning when a man, maybe the great tamer himself, places the skull onto the thick pages.

The piece closes with a simple image, which is reminiscent of the well-known plastic bag scene from the film, American Beauty. A man repeatedly blows a paper into the air, never letting it drop to the ground. This serves as a lighthearted reminder of the incessant day-in and day-out that we are all subject to. The lights fade on stage as a spotlight further illuminates the tableaux of bones and the hefty book. Perhaps this is all we leave behind – corpse and corpus.