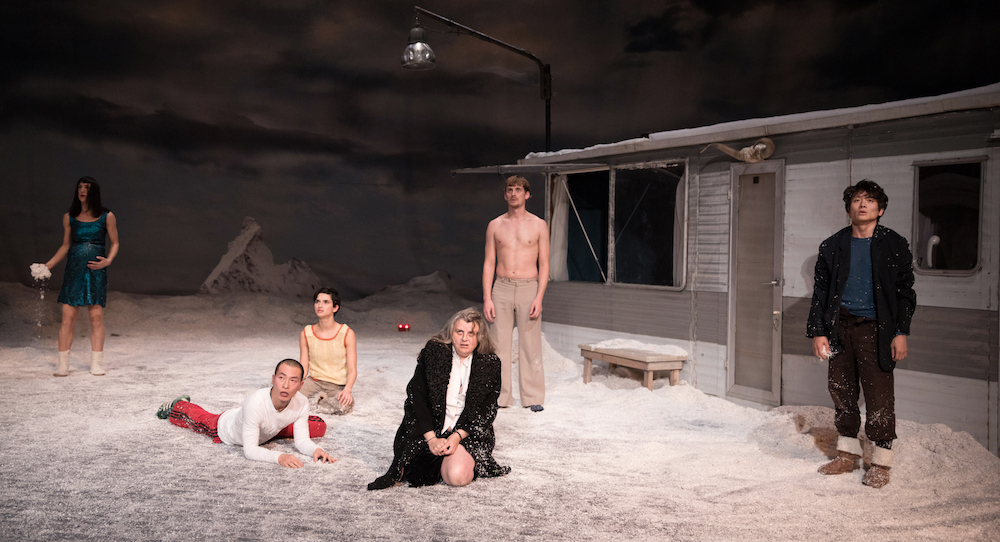 Peeping Tom’s 32 rue Vandenbranden ran from November 20-23, at the Harvey Theater as part of Brooklyn Academy of Music’s Next Wave Festival. The hour-and-20-minute work was conceived and directed by Gabriela Carrizo and Franck Chartier and premiered in 2009.

The set consists of series of trailers in a range of snowy mountains, twinkling with irony in juxtaposition with the picturesque theater. The audience can see into all trailers but one where the blinds are drawn, likely in support of the piece’s numerous visual tricks.

We hear a howling wind, which serves as a baseline sound-space over the course of the show, and moments later, the first of the evening’s series of vignette unfolds. A woman donning a fur coat and high heels buries a baby in the snow, both foreshadowing the plight of the piece’s pregnant character and, in hindsight, simultaneously serving as the introduction and conclusion to the show’s temporally disjointed narrative. Another early scene is a playful snow sequence where all six characters perform perilous slides and falls, setting the tone of risk taking that suffuses the evening.

Humor is a major strength of the work and is best exemplified about halfway through the piece when an effeminate male character pastes a picture of his face on the outside of his trailer along with his phone number and the text “HONK HONK”. He then performs a solo that can only be described as profoundly creepy in a pair of whitey-tightys. The movement becomes increasingly sexual, and we eventually see the character masturbating emphatically and proudly. We are saved from this nearly unbearable tension just in time by a group of skiers who walk by and wave at the man who waves back sheepishly.

Other comic highlights include the pregnant woman in her trailer sipping water, spitting it onto the window and “cleaning” the glass with her bare hand (all while “serious dancing” is happening outside the trailers), an extended monologue about beverages and a petite man in an extra-large suit walking on the very tip of his toes to impress his love interest. Speaking of love interests, affairs of every imaginable kind appear and disappear, transcending archetypal notions of right and wrong and instead calling deeply fundamental concepts like identity into question.

The technical dance elements in 32 rue Vandenbranden are not hidden within the choreography but rather come right out and assert themselves. Restriction is acutely explored as the dancers often work within rigorous physical constraints like holding one’s foot, maintaining contorted positions while being manipulated and even standing on each other’s shoulders. Despite the dancers’ astonishing skill, however, the technical elements do not feel well embedded into the storyline, and there is an ever-present lack of transition and overall continuity, which makes at least a few of the frequent choreographed temper tantrums seem melodramatic at best and unmotivated at worst.

When combined with the piece’s caricatured trailer trash cast, the snowy trailer park has the curious knack of striking audience members in disparate ways. Some walk out of the theater irritated and others leave clearly enlivened, but bewilderment is a constant. Although even the most attentive audience members are left asking, “Did I miss something?,” we secretly believe that we haven’t. That the confusion is intentional, reflective of some obscure state of existence that we have merely been afforded a small taste of.

From operatic singing, affected dialogue and ambient beeps, to floating suitcases, raining umbrellas and unbridled screaming, 32 rue Vandenbranden wavers between baroque and surreal. Perhaps the only clear message we can glean from this curated menagerie is one of humanism – an exemplification of the notion that beauty is liable to rear its head in even the most unexpected of places.