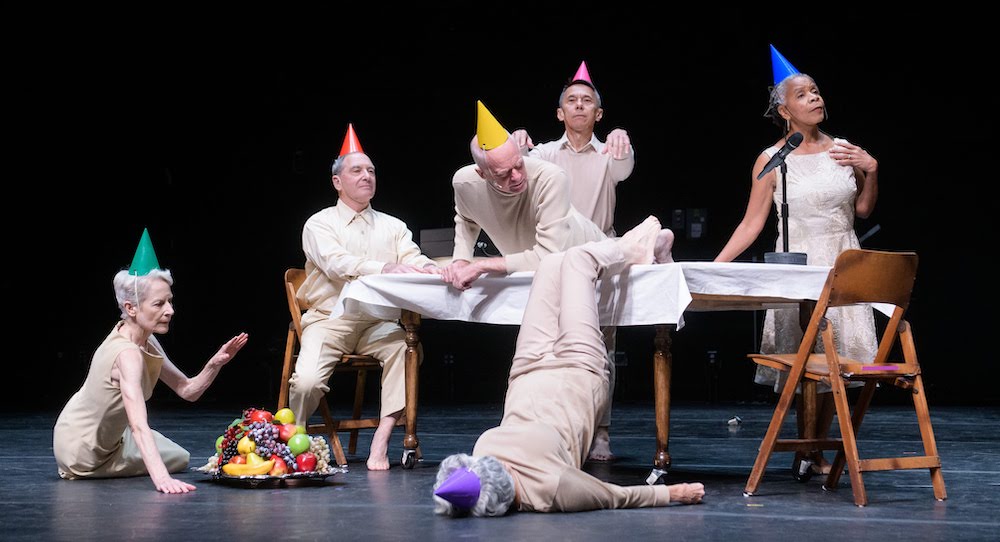 As a dance reviewer who sees a good deal of work, I’m often pleasantly struck by how much possibility for mood, aesthetic, and message lies within this one art form — sometimes, within one program of it. Big Dance Theater’s The Road Awaits Us was one of those programs with a memorable diversity of offerings. It brought me as an audience member to many different mental and emotional places, as well as reinforced for me just how much aesthetic and conceptual potential dance art holds.

The program shared that since 1991, Annie B Parsons’s Big Dance Theater has “often work[ed] with wildly incongruent source material, weaving and braiding disparate strands into multi-dimensional performances…generating each piece over months of collaboration with its associate artists.” This group of artists is a “long-standing, ever-evolving group of actors, dancers, composers, and designers,” it added. The spacious Skirball theater offered a space fitting for this multiplicity, yet one not overly ornate or inaccessible to any old audience member.

The program opened with the premiere of Parson’s ballet dance, danced by Elizabeth Dement and Natasha Diamond-Walker. If there could ever be a postmodern ballet idiom, Parsons found it. Dement and Diamond-Walker executed the movement idiom with comfort and command. A pink color scheme and a rather plush couch placed the work in an elegantly classic, almost youthful ballet dreamworld (costumes by Enver Chakartash, lighting by Joe Levasseur, and set by Lauren Machen). A score of punctuated notes and underlying resonant notes allowed for multiple nuances in the relationship of movement and music. The dancers added an additional auditory element with intermittent body percussion.

They reached up arms fifth en haut, an iconic and timeless balletic image, then arms lowered. They oozed and snaked through their arms bones to have hands come next to one cheek, palms together to then clap twice. This movement motif was layered, aesthetically pleasing, and memorable. Small leaps (petit allegro) appeared classical in certain qualities, but also had a softness and ease — such as taking off and landing in a loose fifth position. Also updating and mixing up the classical qualities within their movement were joint articulations and isolations, such as hip movement that brought a bit of sass.

Images coming across the screen, fragmenting and darkening the petals and other parts of a rose, added an additional visual element to the movement. The music pulsed along with these images, deepening the mysterious and unique aesthetic that the images began building. The dancers also donned large skirts and head accessories, aligning with that dreamy ballet world aesthetic but exaggerated to the point of being humorous. A theatrical section, voiceover discussing drinking “for my troubles”, as well as referencing shame and guilt, added to this humor yet also pointed to deeper, darker emotions. The dancers gestured to each other to play out this theatricality.

Later, narration discussed the history of ballet, including the plot and origin of Les Sylphides. The voiceover and language here was formal and academic in style. To me, that quality added to the humor of the work. The dancers continued to move in this postmodern ballet idiom, still wearing big skirts and head pieces. One might think that these aesthetic elements would clash, yet somehow they all came together beautifully. To end, the dancers stripped off their big skirts and walked off. They seemed to signal “it is what it is, it was what it was,” leaving the artifice of performance behind.

Next came Cage Shuffle: redux, an unconventional and unexpected — but nonetheless pleasing — work in a postmodern style (in aesthetic and concept). Creator and Performer Paul Lazar explained the concept before beginning the work in earnest; he would be moving along with phrases from minute-long stories from John Cage, stating them aloud to the audience as he heard them in a mouthpiece. He would also get a movement cue, and with every performance the movement and text cues would offer different combinations of text and movement, he explained. The aesthetic was Spartan, in a way that fit the work to come — Lazar wearing blue jeans and an earth-tones jacket, performing in front of a closed curtain in conventional bright yellow lighting (Levasseur lighting this piece as well).

Despite that chance method, serendipitous moments occurred. When discussing “a mental rehabilitation center”, he skipped in circles and dipped his spine side to side (as if a mental issue was compelling him to move so freely and strangely). The audience laughed at this, as they did often in this work. Speaking John Cage’s words, as he said “I realized that my problems were social rather than musical,” he gestured as if holding a book and slowly, tensely flipping pages. It was as if he was acting out reading pages of music, but realizing that within those pages were not where his issues lie. These gestures and his movement style were a lovely stylization of pedestrian movement. He touched a hand to the opposite elbow and then reached that hand up to the sky. Lazar had a satisfying simplicity and clarity to this movement. DeMent coached him in movement. As an encore, to end the work in earnest, he danced to No Business Like Show Business, with joy and ease.

The Road Awaits Us, another unconventional and enticing work, closed the program. Parsons choreographed the work and generated its concept, and co-directed it with Lazar. Like a Blue Man Group show, in a way this work defies description — but this reviewer will do her best. Dancers began the work walking across the stage in different patterns — some skipping, some walking slowly, some walking more quickly. They wore old-fashioned birthday caps (cones with bright-colored polka dot patterns), as well as simple white tops and bottoms (a kind of blank slate, designed by Enver Chakartash). I thought of different people walking on the paths of their lives at different speeds and in different ways, with birthdays as markers on those paths.

Through various theatrical vignettes — sharing presents, a visitor (at their demand) telling stories, discussing the “Joneses” (referencing the traditional American middle class) and memory retention (or lack thereof) — we got a better sense of these characters. There were darker moments connecting to society and politics, such as that story-teller outsider — a firefighter — not willing to put out the fire in their own setting because they weren’t  “real Americans.” Movement, text spoken over loudspeaker, props, and basic set elements (such as chairs and tables) built this world and these events.

The cast performed a noteworthy movement section towards the end, more conventionally choreographic and virtuosic than the movement in the work thus far. Multifaceted yet clear formations framed movement vocabulary of the same qualities. It warmed my heart to see these elder adults moving freely, adeptly, and courageously. To end the work, they walked off saying goodbye to each other and saying statements with deep meaning, such as the title of the work “the road awaits us.” No matter what would be on the remainder of that road of life for them, it awaited them. Just like all of the works in this program, it offered various moods, meanings, and emotional offerings — from existential thinking to humor to beauty to serendipity. I walked out of the theater once again impressed by, and pensive about, the diversity of offerings that dance art — if carefully and thoughtfully crafted — has to give.