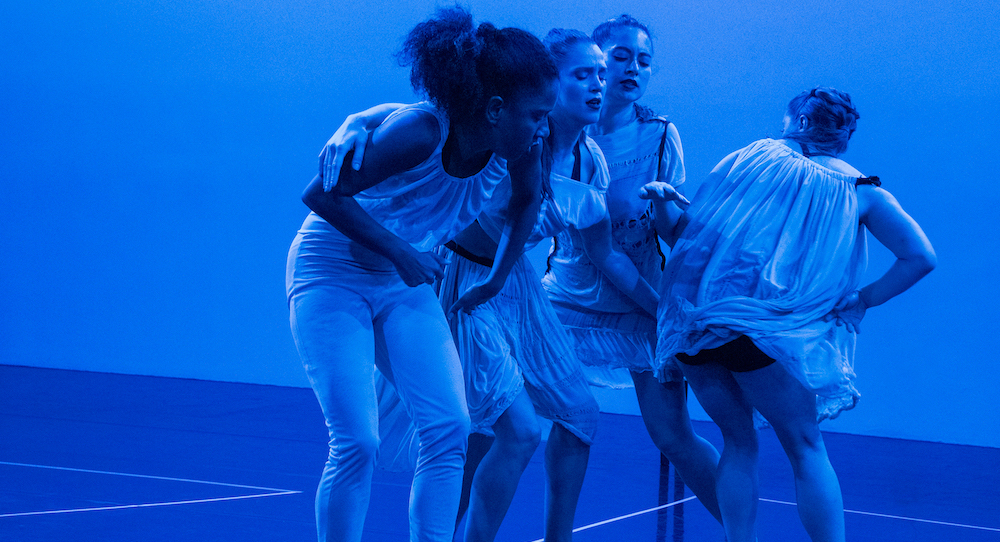 “Belief is a beautiful armor, but it makes for the heaviest sword,” goes one John Mayer lyric. For good or ill, we all have deeply held beliefs, many of them inherently entwined with social structures, hierarchies and priorities. In ASPECTOS, Curet Performance Project insightfully probed and reflected back how our body (particularly the female body) engages with these structures and beliefs. Movement was athletic and enticing. Concepts were inventive and poignant. Visual effects were pleasing and complemented both of those aspects. Language added another meaningful element. It all came together to offer a memorable, meaningful night of dance art.

Entering, I read a chilling poem on the walls of the lobby, referencing imperialism, racism, misogyny, and the pain many carry in their very bodies because of these forces. I knew that I was in for a thought-provoking, emotion-stirring program. The first work, “Negra Con Tumbao”, was strikingly intertwined with Christian imagery and meaning (at least from my vantage point as a Roman Catholic). Audience members mingled and chatted in the Center for Performance Research lobby. Fernando Moya Delgado walked in with a table, forcefully moving and speaking (in Spanish). He set it down, then adding a chair and sitting to pray. As he prayed a common Catholic prayer (I believe the Our Father, though I don’t know Spanish well enough to say for sure).

A few women dressed in off-white garments entered, their energy confident, intense and even aggressive. They wrote offensive slurs right on Curet’s skin, a kind of branding that felt dehumanizing. This physical dehumanizing continued to the point of pushing her to the floor. They exited, steely-eyed. Curet began to move — slowly but assuredly, until she was standing. Another dancer washed off the slurs written on her skin. To me, this action powerfully emulated Christ washing the feet of his Apostles. All along, Moya Delgado prayed. Her rising despite oppressive forces, with religion in the background, seemed to mirror cultural phenomenon — in all of their complexity and multifariousness.

“Madre Mia” came next, an intriguing work further evincing Curet’s skill at using language to complement movement in service of meaning. What also piqued my interest, and demonstrated thoughtful programming on Curet’s part, was how Moya Delgado began the work by pushing a table on — how he began and ended the prior work. Music (by Novalima) came in, with a multiplicity ripe for the exploring in movement; a strong downbeat met higher electronica sounds and chanting.

Some sat while Kristen Hedberg danced a memorable solo, grounded and assured but somehow also with an aspirational, inspirational quality. Also becoming clear was Curet’s unique blend of Afro-Latin and contemporary dance, with lines and movement into the floor but also accentuation of hips and other isolated body parts. More towards the end of the piece, the dancers sat and said phrases at each other, repeatedly — yes, at each other, as there seemed to be no hearing and taking into account what each other said. This section seemed to be a meaningful illustration of communication failures in all types of relationships, particularly close ones such as in families.

The third work, “Sistema”, cogently explored the experience of living within a female body amidst the systems in this culture that seek to define and limit its possibilities within. Dancers began moving along a back wall, as if seeking familiarity and security. They wore little light blue dresses, accentuating their form. A darker blue lit them. Curet’s voice rang through the theater, speaking about the experience of being a woman. “When I think about being a woman, I think about my body…it’s such an embodied experience….we’re receptive,” she said. All of this feeling can lead to numbness, she asserted. She discussed this all in connection with systems that limit and oppress women. These words resonated with me down to my bones.

All along, five women (including Curet) moved — coming out from the wall, spreading out in the space and then coming together at center stage. The movement was a bit more classically contemporary than in the prior two pieces, yet still had that Afro-Latin grounding and accentuation of particular body parts (shoulders, hips, feet, for example). They circled hips to the back, reached up high, and jumped up — bringing in a groove and lively feeling. Soon energy changed with lights brightening and energetic jazz music coming up.

Then another dancer’s voice came up, asking “what do you see when you look at me?”, listing all of the different things that she is — a daughter, an artist, a dancer, a lover, et cetera. Again, I felt these words and these ideas resonating into my bones. Movement took on a new quality of emphasizing the spine and its movements — shifting forward and back or sidebending. I thought about one’s “core essence” — one’s essential nature within the trunk, the core holding literal and metaphorical strength.

The dancers moved benches and seats, a tension rising within the group — as if trying to find perfection through trying different fixes, and anxiety growing as a result. They then danced to sit on the ground — facing each other in a neat formation. “A system of women,” I thought to myself. Curet’s voice came back, asking “and when did it all begin — when did we stop thinking?” That’s a potent question indeed, I thought. It begins to surface questions about our fundamental beliefs, and how they relate to our very physical beings (our bodies).

The program closed with “Isla”, a work shining a light — through movement and text — on Puerto Rico one year after Hurricane Maria. Someone moved in under a tarp, creeping and crawling, while text announced “they paved paradise to put up a parking lot,” (reminiscing the Joni Mitchell song). The program discussed how Curet returned to her ancestral home of Puerto Rico one year after the devastating storm to find blue tarps still covering many homes and store fronts. “Tarps laid across building rooftops. Questions still unanswered. This is the home of a people, and these are my people,” she there shared. The energy and tension in the room rose with more dancers coming in and Moya Delgado yelling “un ano, one year!”

He danced a phrase that was later repeated, a clapping of the sides and a jumping up with legs spreading sideways. It reminisced architecture, like the sloping of a building’s roof. The claps made me think of loose boards clapping against the side of the building in high winds. Another auditory element that came in later was newscasters reporting how separate sources reported a different death toll from the hurricane. Movement intensified and sped up, reflecting the stakes that the audio described.

Later, all in the group — excepting Curet — moved into a clump on the ground at centerstage. Chillingly, curet covered them with a tarp. Lights faded down, the work ending. I thought of all who had passed away from the storm, and bowed my head in reverence for their spirits. Though it’s all quite complex, I thought about how the effect on these bodies were inextricably tied to beliefs — tying to colonization, imperialism, racism and capitalism. Through adept and meaningful shaping of movement, text, and design elements, ASPECTOS touched upon these colossal themes in an accessible and memorable way. The program underscored the strength and importance of the truth that we all have bodies, and we all have beliefs.