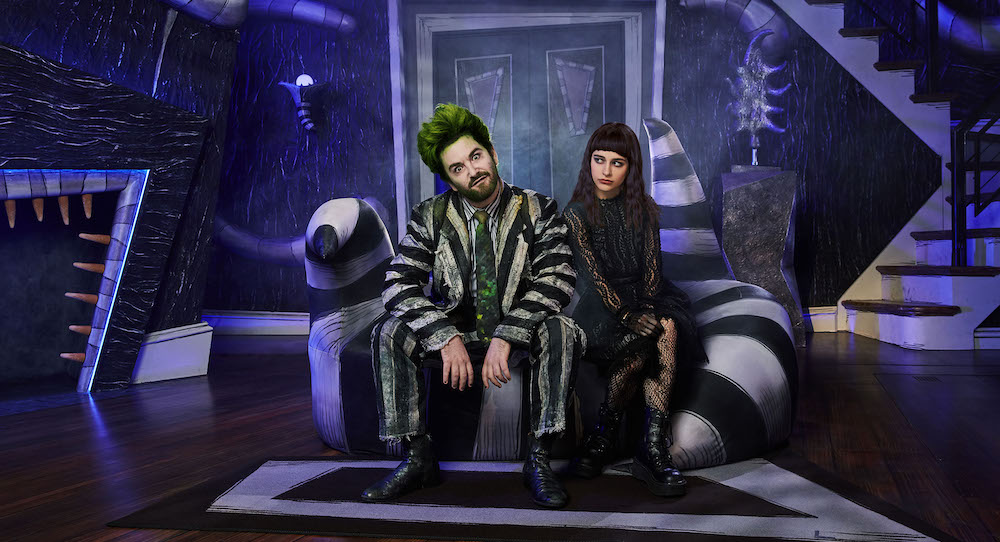 “Beetlejuice! Beetlejuice! Beetlejuice!” To open, Beetlejuice was so not my favorite movie growing up. As a tween, I found it was dark and gross and really, really weird. Now older and wiser (the latter is somewhat debatable), I appreciate the Tim Burton style and find it more interesting than appalling. When Beetlejuice came to Broadway, I didn’t rush to the theater. But I was also not averse to seeing a show that attracted such a fan following. I wanted to see what the buzz was about.

Storytime…Feeling invisible to her dad, forlorn daughter Lydia befriends a trio of ghosts in her family’s new home in an attempt to reconnect with her dead mom and restore the life she once had. We finally find ourselves at a happy ending after some accounts of possession, attempts at exorcism and adventures to the netherworld. If you’ve seen the 1988 original Tim Burton movie, you’re probably going to love (or, at least, understand) the musical version, too. In fact, film fans are perhaps the main target of the musical, which is ripe with inside jokes, cartoony characters and typical crude Beetlejuice-isms that are so (oddly) near and dear to our hearts.

Choreographer Connor Gallagher (Elf, The Robber Bridegroom), thrives in the animated, comic book sort of world that is Beetlejuice. All of Gallagher’s choreography is refreshingly character-driven. The quirks and individuality of each character are embodied in his or her gait, posture and pedestrian articulation, in addition to the frequent vaudevillian dance breaks. In the memorable “Day O (The Banana Boat Song)”, Lydia’s father, Delia, and the possessed dinner guests jerk and undulate robotically as if their bodies have been taken over, out of their control. The ensemble also shines in numerous production numbers. At one point, the stage is covered with a whole squad of pinstripe suit-clad Beetlejuices, all dancing with chaotic abandon and limitless energy to illustrate the real Beetlejuice’s over-the-top character. Later in the show, the ensemble dons black body suits with white skeleton bones and huge skull headpieces for a more precision/unison number as if the Rockettes dumped Christmas for a Halloween Spectacular.

Although, for me, the ensemble was whom I most enjoyed watching dance-wise, the leads had the impressively difficult job of bringing the film’s iconic characters to the live stage. Kerry Butler and David Josefsberg (as newly deceased ghosts, Barbara and Adam) are a good balance of normal, everyday people with a sensible side of kooky. They felt relatable and (somewhat) balanced compared to some of the more eccentric characters. Leslie Rodriguez Kritzer slowly but surely makes you fall in love with the character of Delia. Much like the relationship between Delia and soon-to-be-stepdaughter Lydia, the audience at first feels annoyed by Delia’s esoteric life-coaching philosophies but later realizes her kind-hearted intentions and lovable absurdity. Sophia Anne Caruso’s vocal chops are no joke (Broadway had better watch out for this 18-year-old leading lady), although I sometimes found her difficult to understand. Alex Brightman stars as the crass and clever ghoul, Beetlejuice (yet, for some reason, it’s Lydia who gets the final bow during the curtain call…). Brightman has some pretty big shoes to fill stepping into the title role originally played by Michael Keaton — and he does it with pizazz! Brighton’s painfully scratchy voice, gross humor, quick wit, spontaneity, eccentric movement and engaging breaking of the fourth wall make his Beetlejuice a creepy old guy that you somehow can’t get enough of.

I’m surprised myself that this review seems so positive…I did, indeed, have a good time at the theater. Still, I’m never nearly as excited (nor satisfied) with seeing a musical based on a movie I’ve already seen. I laughed a lot and was impressed by the Burtonesque spectacle of it all, but I didn’t feel any desire to discuss the show, call my friends to encourage them to see it or read critical reviews of the production. And, in that regard, I am not sure audiences would enjoy Beetlejuice were they not only not familiar but not big fans of the film. Beetlejuice is only funny and “relevant” in 2019 because of what it was in 1988. Is that a win? You decide.