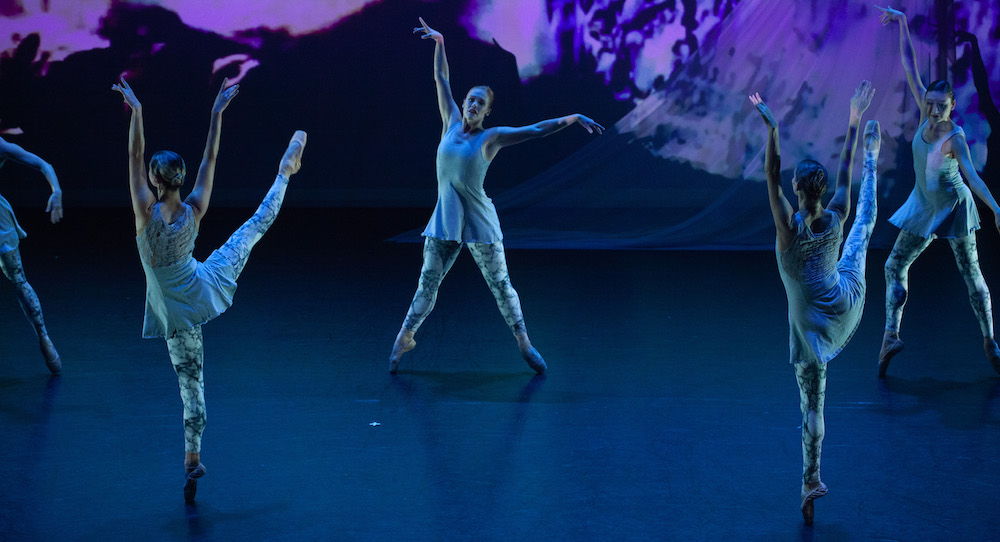 To me, dance art is different than dance in an inclusion of other art forms — music or other sounds, costume design, lighting, and sometimes set design, props and projection. Apart from a focus on large, universal themes conveyed in a digestible way, this aspect is what most struck me about MOVEIUS Contemporary Ballet’s Glacier: A Climate Change Ballet; multimedia designs complimented the movement in an aesthetically cohesive presentation, all toward commentary on that big idea. The Washington, D.C.-based dance company, with Artistic Director Diana Movius at the helm, “probe[s] policy issues and perform[s] socially relevant stories.”

The aesthetic of the opening work (as well as title work), Glacier: A Climate Change Ballet struck me immediately. Projections of glaciers filled the backdrop and a single white sheet — pure yet mysterious and holding on precariously — hung before it. Costumes were an off-white, reflecting the subject of the work (costumes and scenic design by Movius and Carrie Denyer, video projection by Robin Bell). The score (by Max Richter, David Lang and Andrew Thomas) laid a fitting foundation for the drama of the movement, without feeling melodramatic.

Dancers entered from the wings, lunging and contracting in canon — creating a rippling effect like an insect’s movements. Most moved to the back for one dancer to take centerstage. This shift was exemplary of the quickly shifting, dynamic action through much of the piece. Also clear was the movement vocabulary’s grounding in classical ballet technique, but also contemporary sense of ingenuity and uniqueness — for instance, a phrase from yoga’s “side plank” (an arm moving with the rest of the body stationary) and one leg extended to the side with the other leg kneeling.

All the while, the projections of different images of frozen — and melting — natural bodies were spellbinding. I had to pull myself back to watching the dancing, as intriguing as it was. When my visual processing could zoom out and take in both dancing and projections, then I was truly wowed. The score also often shifted to match the energetic quality of the movement, helping to — along with those striking visuals — take the audience on a sensory ride. Other auditory elements added to this aural ride, such as dancers’ slaps to the ground in the “Calving” section — seeming to represent the loud crash of parts of glaciers into ocean water below it. This creative choice was so compelling that I wondered if something like it could have been effectively, and in a thematically appropriate way, incorporated into other sections.

Nevertheless, a couple of other sections stuck out to me as poignant and memorable — interestingly, both solos. Emily Hashiguchi danced Meltwater with a grace yet an assertive clarity in her movement. Adam Chavis danced Polar Bear, moving with the somehow calm desperation of this animal whose habitat and existence is increasingly threatened. The projections of a polar bear swimming, no ice sheets — something it needs for survival — in sight, was nothing short of heartwrenching.

The work ended with dancers covering their faces with clothes and walking back towards the projection. There was a sense that they were moving into an uncertain, yet most likely somber future. Connecting this with the established science on climate change, this imagery — and the quality with which the dancers delivered it — was truly chilling.

The second work, Rite of Spring, Crash of Fall (2018), was more theatrically-based and grounded in occurrences of the human, rather than the natural world — yet equally memorable. Suited dancers, in black slacks and jackets, white collared shirts, moved with a slickness and a slyness. They bent deep, knees wide to the side, then lifted up to have one knee bent (“attitude” in technical terms). A dexterity here spoke to me of something sinister. I could sense secrecy in something about their actions. They spun on chairs and shuffled paper money.

Green lighting underscored money being in question, as well as pointed to something ill, something not quite right, at work. They also shuffled boxes and faced each other, moving with assertiveness and aggressiveness. This seemed to be a debate over something to do with those boxes. More and more of them stacked up. Following a section embodying contentious action, one of the suited dancers took off her jacket — seeming to represent a change of role.

Next, we met people dressed in everyday clothing, doing everyday things like walking with a partner and sweeping. Their movement was more classical, lifted and elegant than that of the suited dancers — yet also had a grounding. I thought of the phrase “salt of the earth”. The boxes were present, just as numerous as they ever were with the suited dancers. Yet soon those stacks of boxes collapsed, to a point where the everyday folks couldn’t keep them up. They also physically collapsed the boxes between their hands, betraying the boxes’ collapsibility and tenuousness.

The suited dancers would be back, and a face-off ensued. The two groups faced each other on a diagonal — a choice that came off to me effective visually. One dancer in the “everyday people” group brought out a sign saying “OCCUPY”, referencing the Occupy Wall Street movement. The dancer who had worn a jacket was with them. She was a curiosity to me. The work closed with a section featuring the suited dancers and their chairs, shaking and manipulating that once-jacketed dancer. She now held the Occupy sign, and just before the lights came down, she flipped it over to reveal “JUST SOLD”.

It was suddenly clear to me that this dancer represented Washington, who had been leveraged to shift with siding with everyday people to acquiescing to the will of these bankers (it was also fully clear to me these suited dancers were — something I had suspected); the “too big to fail” bank bailouts have been a thorn in the side of many Americans from across the political and ideological spectrum. Many of those making these decisions had once been high-profile banking professionals (hence, once wearing a jacket). This ending was a powerful one to a work strong in aesthetics, theatricality, and movement. I did wonder if making the identity of that Washington character clearer earlier was possible. Perhaps it wasn’t, in the context of dance art.

The closing work, Ground Control, was quite aesthetically memorable and pleasing. It offered pure majesty in its imagery and in the feeling of the music underlying it. As a central part of that theme, light was a key theme in the work. For example, a dancer in a gold costume danced with one in blue and white, whilst projections of our moon filled the backdrop behind them. Those projections were just a few of the many beautiful ones within the work of our earth, moon, and outer space beyond it. In truth, the light bouncing off our moon is its own sort of dance.

Balls that lit up, in various colors, also offered visually striking effects. Dancers held, rolled and threw these balls at different times in the work. The resulting effects added to how the whole stage picture came together cohesively. Costumes were also a notable part of that aesthetic picture; in addition to that gold costume, other costumes had a space feeling from a shiny chrome-like silver coloring. The texture and level of shine in these costumes were not overdone in a way that felt satisfying.

The movement was the most classical of that in the program’s three works, though with quite innovative vocabulary and staging. Straight arms through varied patterns, as well as long and lovely lines, gave a feeling of the trajectories of moving celestial bodies. In staging, there was a satisfying image of dancers weaving through mainly stationary dancers, who were turning and lunging in a repeated movement phrase.

This sort of of structure also occurred in a section with a line of dancers standing just off centerstage and a pas de deux happening to their left. Stagnant and moving celestial bodies co-existing came to mind for me.

The ending was as visually and energetically satisfying as the whole work. The dancers rolled their light-up balls across the stage as the lights went down and the projection of earth, seen from a satellite’s view, faded out.

The work reminded me of why I love art on space and our big planet — it reminds us of how small we are in the context of the universe, and how beautiful it all is. Ground Control did that with effective and enjoyable aesthetic twists. MOVEIUS Contemporary Ballet’s larger program reminded me of why I love art that’s pleasing to experience but also delivers an important social message — the aesthetics pull us in so that we can hear the important things it has to say. Therein, head, heart, and our senses come along for the ride.