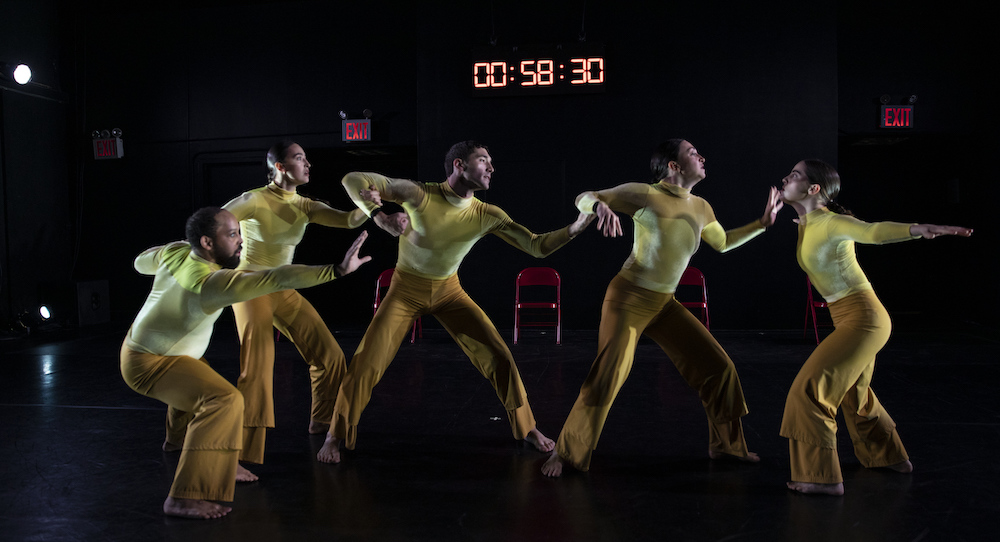 Time. It’s quite a loaded concept. The word can trigger stress, anxiety, hope, nostalgia and a million other emotions. Dance takes place in time, and in space; a famous choreographer once said, “Dance is what happens between here and there,” and one could argue that still holds true if phrased as “between now and later”. Freemove Dance’s …its time… demonstrated the power of humans moving on stage, in time and in space — in their realness and rawness — to delve into the idea of time, as loaded as it may be. The Freemove Dance company members and Artistic Director Jenn Freeman, along with their musical and visual collaborators, offered cogent shaping of such movement — as well as theatricality — to make this exploration possible.

Audience members entered to see a “pre-set” of dancers walking in varied patterns, somewhat slowly and with facial expressions of curiosity but also unease. The same feeling was in their physical carriage. It was if they sought to discover, but feared what they would find. With the standard theater pre-show loudspeaker announcement reminding audience members that videorecording is prohibited and to please turn off cellular phones, we knew the show was beginning in earnest. It was a first testing of our idea of time; were they performing before the show started?

Lights dimmed down (lighting design by Philip Trevino) and drums came up (drumming and percussion co-arranging by Price McGuffey), while dancers moved into lines. Unison movement alternated between the fast and frenetic, to more streamlined and slower (such as a tipping of arms spread to the side, like how children play airplane). Every so often, they would anxiously look to the clock on the wall behind them — black with red letters, counting down from sixty minutes. The yellow of their costumes (designed by Mondo Morales) against the glowing red of the countdown clock, on the otherwise bare stage, created a compelling aesthetic.

At this early point, they were united in unease at what the clock kept showing — and changing what it showed. They were also united in movement with the clear, accented drumming, impeccably moving along with its beats. The drumming began to feel like its own character. It seemed as if this drumming lent itself to quick joint articulations in movement, a Fosse-esque pop of a hip or shift of the gaze filling up a room. The dancers carried this challenging approach well. Just when I felt like I might tire of movement paired perfectly along with percussive accents, movement to silence and even opposing the drumming in rhythm began to come in more. As such, I wonder if it might have been useful to incorporate those different relationships to music earlier in the work.

One moment in which the drumming — a keeper of time, in truth — asserted its influence was with dancers stopping moving when a cymbal ceased playing. They looked around at each other in anticipation of when it would play again, and they would move again. So began in earnest another prominent feature of Freeman’s work — little theatrical vignettes that humanized the dancers and brought us into their psychological and interpersonal world.

The next one of these little vignettes came soon, with the dancers sitting in a row of chairs and saying phrases like “is it time?”, “should I go?”, “is it now?” — underscoring just how much awareness of temporal processes and realities governs our speech and action. Anxiously, they would get up from their chairs and sit down again. All the while, the clock ticked down. It took me a bit of time to get there, but eventually I was caught in the drama of the question “what will happen when it hits zero?”. That question would become a significant one indeed.

Another memorable moment was when dancers piled on each other. They lay their for a minute or two, offering a chance for audience members to breathe and process what they’d been seeing — but not so long of a chance that their minds were likely to spin off elsewhere. Amidst the dynamic action of the work, I wonder if more of these moments for audiences to digest content might have effective for their keener, more valuable  reception of the work.

One dancer rose from this clump and danced a memorable solo, full of breath but also articulation. The physics of how the movement moved from the initiation point in her body to its other parts was fascinating to experience. In general, Freeman’s movement blended — as well as juxtaposed — joint articulation with larger body movements in ways that were quite satisfying. There was clarity without rigidity.

Exemplifying these movement qualities was a section of the dancers in a line of chairs, feet together and apart and making percussive accents with their hands. Their unison was spot-on and the multi-sensory offerings enticing. This section resurfaced a couple of times during the performance, one element among others that kept a cohesive through-line through all of the varied pieces (others included the clock ticking down and the drumming).

An audience favorite seemed to be the cast’s acapella cover of Cyndi Lauper’s “Time After Time” (1983). The dancers donned hooded cloaks and stood in a line at the edge of the stage, spotlit with the rest the stage dark. They began to sing and gesture, “hamming it up” at just the right level. One even sang a high-pitched echoing harmony line, bringing even louder pleased laughter from the audience. Other humorous moments, in those varied little theatrical moments, included dancers fixing each others’ costumes and straightening back out a chair from which another dancer just rose. These instances pointed to how we pressure each other in the face of our own time-related stress.

The mood would shift to something much less humorous and positive, however. As the clock ticked down closer to 00:00:00, the dancers yelled and ran, chaos ensuing. Ultimately they came to huddle centerstage. We could only hear their breath and the ticking clock. 00:00:00 hit, and the red numbers flashed. Nothing really happened, which felt like the point here. A big red rope dropped from the ceiling, to a darkened stage, and one by one the dancers climbed up it. Where they rising above the stress of time, having seen nothing happen when it had run out? Was it time to go or do something else?

That might be an unanswerable question — some of the most fruitful ones that art can provide. Final questions answered or unanswered, we could all leave the theater with powerful food for thought. That seems to have made viewing Freemove Dance’s ….it’s time…, apart from its aesthetic cohesiveness and pleasing theatricality, an hour and a half well-spent. It could remind us not to put so much importance on that very matter itself.