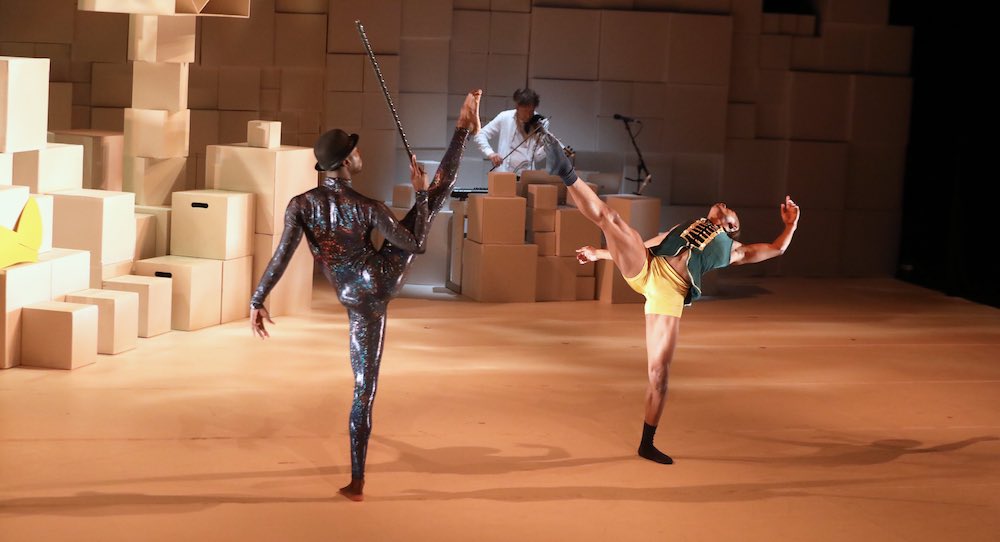 I love to attend live dance art because there’s a magic that happens when it all comes together — when movement meets lighting meets music meets costuming. It’s a magic that makes childlike wonder within me. BalletX’s The Little Prince additionally portrayed a classic children’s tale, and a stellar presentation of the text brought me back to that childlike place all the more. Yet the deeper in one peers, the more Antoine St. Exupery’s text points to big life questions and themes — with strikingly complex nuance. That quality offers something for the most high-minded of adults to appreciate.

The Philadelphia-based contemporary ballet company brought all of this across with facility, ingenuity and thoughtfulness. The dance rendition of the text was choreographed by Annabelle Lopez Ochoa. The curtain rose on Matt Saunders’ minimal, yet somehow also multifaceted set — three stacks of boxes with sections of detailed carving. A lithe dancer (Stanley Glover, a So You Think You Can Dance Top 20 Finalist) entered, articulating through his joints in an astoundingly serpentine way. This Snake character would become quite central to the work and its larger questions on life. An enticing score of clicking sounds would become central to his character, an aural signature of sorts.

Suns and moons on sticks, walked by dancers in white, also moved across the sky. This creative choice helped to build the atmosphere of fantasy and children’s stories. The score complemented this feeling, as well, building a feeling of hope but also one of mystery and complexity. Soon a plane crash, one that would propel the plot forward, occurred in this mysterious setting. A man dressed sensibly and functionally walked out, trying to get his bearings — the Pilot of this story (Zachary Kapeluck).

Dancers in white moved around the space with parts of his orange plane, shattered from the crash. The structure and visually quality here was memorable and engaging. The Little Prince (Roderick Phifer), dressed elegantly yet not ostentatiously (costuming by Danielle Tuss, assisted by Martha Chamberlain), came to greet this visitor to his planet. Like the Snake, he articulated through his joints with astounding dexterity and fluidity, yet without the sinister quality to it (also without the dark costume and mysterious musical signature).

The serpent character closed in on the pilot, yet the Little Prince stepped in and called the Pilot away from his draw. The synopsis informed me that this character represented mortality. I thought about the existential angle to the tale this character adds — amidst its childlike magic and fantasy, a deeper theme those of more advanced age can chew on as food for thought.

Another element with nuanced layers, therefore with the potential to spur reflection in more mature viewers, was an exchange between the Little Prince and the Pilot. The Little Prince danced before the Pilot as if imploring, and then they danced together with a box. Audio of a sheep bleating rang through the theater. The synopsis explained how the Little Prince asked the Pilot to “draw [him] a sheep”. The pilot offered him this box and told him that the sheep he desired is inside it. This pointed to the power of imagination and will to achieve what you desire — another deeper meaning with resonance for adults, and also children in this case!

A memorable dance sequence came soon, with a dancing Rose (Francesca Forcella) and her admirer, the Little Prince. Phifer and Forcella’s individual movement qualities — Phifer with a nimble quickness and Forcella with an assertive grace — came together in a strikingly beautiful way, like complementary parts of a harmonious and integrated whole. The movement here, and in truth throughout the work, had a contemporary groundedness but classical ballet’s turnout and feeling of line. It was all part of the magic, one of childlike wonder but also embodied adult intellect.

Next, the Little Prince took his new friend the Pilot to six planets near his home planet, an asteroid (explained the synopsis). Each had a character with a unique foible, or worse problematic issue, reflecting issues of adults in our own world — one categorizing the stars but failing to appreciate their beauty, an alcoholic, one putting nonsensical effort into lighting her small planet (given its daily cycles), a king with no subjects yet many laws, a narcissist always looking for flattery, and a geographer who hasn’t actually been to all of the places he studies.

This seemed to be another message appropriate for both youth and adults — an illustration of these ways of acting that let them exhibit their own folly. Each character had unique movement, mannerisms and some of them vocalizations — really fleshing out who they are as characters and making them compelling as individuals. In between each of these characters, the dancers in white leapt through with streamers on sticks, a drumming score playing. This felt like an effective palate-cleanser in between scenes, a way to clear the slate and start fresh. Every so often, the Snake of mortality lurked, reminding the Pilot (and we audience members) of the reality of its non-negotiable existence.

Act II took us back to planet Earth, where the Little Prince found roses just like his Rose and his planet, and was crushed at the idea that she wasn’t unique. He crumbled to a heap and cried. Phifer’s physicalization and expression of this was committed and effective, yet it was another occasion reminding me of the challenge of telling complex stories through dance. No ways that Ochoa could have made such narrative details came to mind for me, and one could argue that’s what the program synopsis is for — for helping readers understand such details. Perhaps they matter for credit due to the text, but not for getting something meaningful out of the performance.

In any case, the Fox (Richard Villaverde) was the next character we met. His movement was accented yet smooth, in control and authoritative. Another compelling score became the sound signature for this character, with a sliding feel that seemed to convey the fox’s playfulness yet assertive confidence. He came to control the movement of the Little Prince, leading him to follow his own movement. This development led the Little Prince to become reconnected to his Rose in spirit, having tamed what was wild in himself.

The Snake returned, and the Pilot was close to death. A solo with expansiveness and assuredness showed him being revived, however — revived enough to reassemble his plane. The dancers in white reassembled the plane’s pieces, and moved them such that it felt like the plane was flying through the air. Like the suns and moons flying through on sticks, this effect felt harmonious with the overall children’s book, fantasy realm of the text and its dance rendition.

The Little Prince climbed away through the set, followed by the Snake. This choice felt like a reminder to stay connected with the child-like part of us, because life is short and the special, magical moments are fleeting. Aesthetically, the program was expertly presented. Such aesthetic facility created something that could pull me in such that I could appreciate its important message. A children’s story therein had something that many adults could benefit from hearing. In this dance retelling of The Little Prince, the magic of dance art met a message on the magic of life. Thanks to BalletX for the offering.