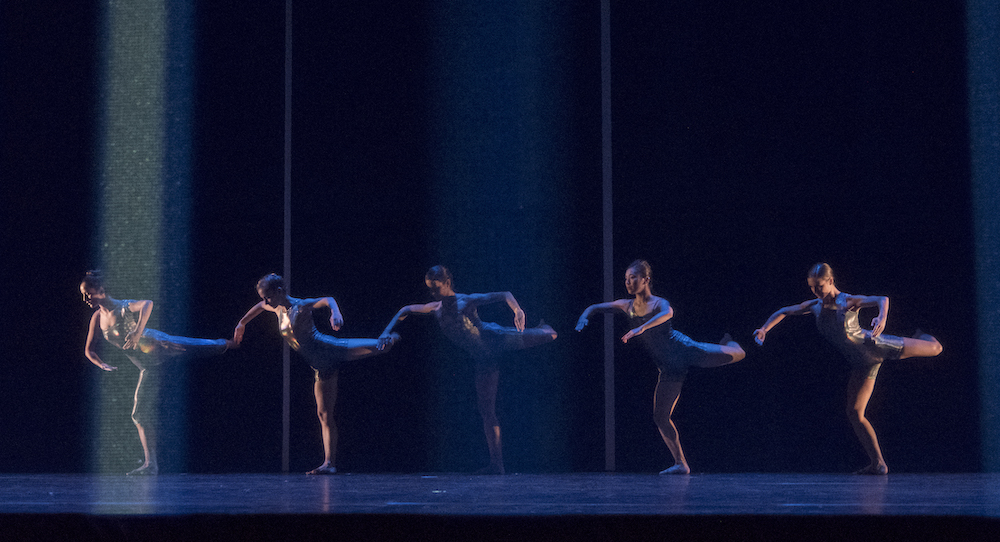 As I took my seat in the Eisenhower Theater for Merce Cunningham at 100, my heart was still racing because I had run through the parking garage, up two flights of stairs and down the length of the Kennedy Center in order to dash into the theater before the ushers closed the doors. Being familiar with the quiet, near stillness of the opening work, Beach Birds, I guessed correctly that any latecomers would have to stand in the back for the entire first act, and I was determined to make it into my seat despite my parking woes. As I slid into my chair, the lights dimmed and the curtain rose, revealing 11 dancers in black and white unitards, reminiscent of puffins, perched on stage and moving so subtly that the action was almost imperceptible to the eye. Having studied the Cunningham technique early in my career, I could feel the tension of that near-stillness deep in my core, remembering the strength and restraint required to sustain such forms and measured movement. Much of the audience seemed to be holding their breath, not wanting to do anything to break the spell being cast by the dancers of Compagnie Centre National de Danse Contemporaine-Angers. It was one of the most powerful moments of the program, and reflected something that Cunningham found deeply satisfying — the drama of potential movement, that moment when the body has the potential to move in any direction.

Cunningham enjoyed observing and sketching the natural world, and Beach Birds reflects his fascination with life at shore — how birds, people and even rocks inhabit the beach with an alert stillness punctuated by short, unpredictable bursts of action. John Cage’s Four3 underscores the work with a mix of subtle, shifting percussive sounds that evoke a sense of being near the ocean coupled with more conventional piano tones, although nothing ever seems coalesce to form a discernible melody. Under the direction of Cunningham’s longtime assistant, Robert Swinston, the Angers dancers performed Beach Birds with accuracy and elegance. At times, the young company lacked that certain mischievous spark and sense of humor so compelling in Cunningham’s personal movement quality and that of many longtime company members like Swinston. That said, I really enjoyed watching Haruka Miyamoto, who seemed to attack even the most challenging, disjointed movement sequences with a sense of joy and intensity. Although I mourned the disbanding of Cunningham’s namesake company soon after his passing, it is a delight to see the technique and repertory finding new life in France under Swinston’s direction.

BIPED, choreographed by Cunningham in 1999, was the second work on the program and a fitting finale on a program conceived to celebrate Cunningham at 100. When it premiered in 1999, Cunningham was 80 years old and showed no signs of slowing down artistically, having recently discovered a computer software program called DanceForms, which was instrumental in the development of the choreography for BIPED and subsequent works. Back in my workstudy days at the Cunningham Studio, the company dancers used to sit outside the studio on breaks and talk about the challenges of interpreting the forms generated by the program; it was a like a game to figure out how to make possible what at first glance seemed near impossible. Twenty years later, Cunningham’s daring choreography and the dancers’ hard work is our gain; BIPED remains one of the most memorable and most haunting of Cunningham works I have seen.

The haunting, at times almost mournful, soundscore was created by Gavin Bryars, and is comprised of recorded sound as well as music performed live by an acoustic quartet. Suzanne Gallo’s almost holographic unitards reflect light in a way that gives the dancers an otherworldly appearance, especially in some the most demanding sections of continuous, repetitive jumping. Aaron Copp’s lighting, a seemingly random series of stark squares of light, is well-conceived, but it is the curtained booths he devised that allow the dancers to seemingly appear and disappear upstage center that were his most innovative contribution. However, digital artists Paul Kaiser and Shelley Eshkar arguably contributed the most striking element of the décor by using animation technology to create large moving digital forms based on the movements of two dancers. Cunningham was far more generous with collaborators than most choreographers, giving other artists almost as much freedom to create as he granted himself, and BIPED is one of those pieces where that generosity pays off beautifully.

Even though my last viewing of BIPED was over 15 years ago, I recalled the work with a level detail usually reserved for pieces I have actually performed myself. Before the work unfolded last night, I closed my eyes and envisioned the dancers in a line across the back of the stage in an impossibly deep fourth position grand pilé before disappearing into the upstage shadows. When the moment came for the Angers cast to embody that sequence, it felt almost as if I had conjured it. Whereas the Angers dancers sometimes seemed lacking in intensity in Beach Birds, most of the company shined in BIPED, as if the speed and complexity of most daring sequences inspired them to push themselves to the next level. At 45 minutes, BIPED is one of Cunningham’s lengthier works, and yet it seemed too brief and fleeting as the lights dimmed on the dancers and the curtain veiled both the flesh and blood performers as well as the digital forms that played over them throughout the work. Doris Humphrey, one of the matriarch’s of American modern dance, is famous for her assertion that all dances are too long, and I often find myself in agreement with the sentiment. But not tonight. Tonight, I wanted the curtain to rise again and see BIPED unfold all over again.