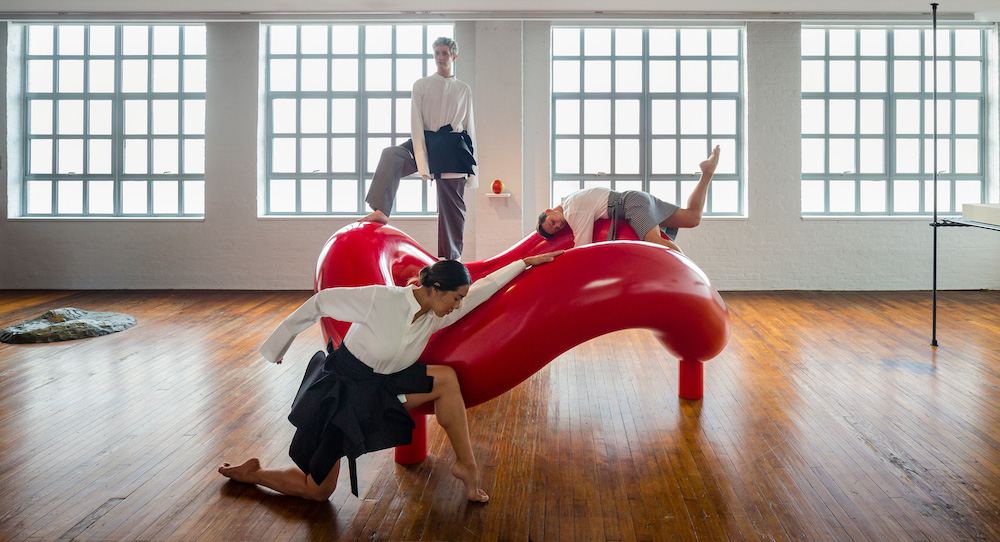 Brendan Fernandes is an artist of dance and visual arts. His pieces tend to include themes of race, queer culture, migration and political protest, created through collaboration. His works have been presented at museums such as the Guggenheim (New York), The Museum of Modern Art (New York), The Getty Museum (Los Angeles), the National Gallery of Canada (Ottawa) and MAC (Musée d’art contemporain de Montréal), among many others. Fernandes’ latest piece, Contract and Release, arrived at The Noguchi Museum in New York in September, until March 2020. Here, Dance Informa speaks with Fernandes on his work and process.

This piece is the second in a series. The first iteration, The Master and Form, was commissioned by the Graham Foundation and presented in the Whitney Museum Biennial. What are the connections between these pieces?

“The Master and Form started in Chicago, and then it got picked up by the Whitney, and the Whitney did a full installation. I’ve been thinking about my training as a ballet dancer, and questions of mastery and masochism, technique and form. So I created these devices that put dancers into these very specific dance positions, these strange BDSM furniture devices that support but also burden the body to hold these positions for a longer period of time. But at times, the dancers escape these apparatuses, giving them a space to release and rest away from these devices. That was a show about the technicality, the specificity in the body of a ballet dancer. All the shows are a question of dynamics of power; it’s all about hegemony.”

Can you give us an idea as to what your piece, Contract and Release, entails?

“The second chapter opens in The Noguchi Museum, and follows the trajectory of my dance career. After I left ballet, I learned Graham technique in my BFA. I was told, ‘You shouldn’t dance ballet; you’re not a ballet dancer. You should dance Graham.’ Graham was presented as the ‘other’ form of dance. It’s freeing, and you dance with your shoes off, and your hair is down, so it’s this whole other notion that you’re more grounded. But Graham is also a very intense technique, one that’s very hard on a male’s body. I’m now questioning the same sort of restraints of masochism in this piece, but looking at it through Graham technique, and thinking about it through the collaborations between Isamu Noguchi and Martha Graham. He built a lot of her sets, including the one for Appalachian Spring. There was a rocking chair on that set, but it didn’t rock. And so I’ve worked with Norman Kelley Architecture to make the chair physically rock. It’s used as a prop in Contract and Release, as another device.

I injured my hamstring while training in Graham technique. That injury made me stop dancing completely, because at this point in my dance career, I was just kind of like, ‘I’m done. I’ve been told I’m not a ballet dancer, I did Graham, and now I’m injured.’ The position I got hurt in was second position in contraction. I didn’t have the hip rotation, my hamstring got pulled and torn. So I make the dancers begin the choreography by sitting in stillness in a contraction on these chairs not letting them rock. It goes back to this idea of the mastery, the form, this intensity that I put my dancers through.”

You’ve said that Contract and Release is partially an exercise in discovering how the dance techniques used in the piece (Graham technique, among others) might be fetishized. What does that mean to you, and how did you come to be interested in that question?

“In the dance world, there’s only one way to be. And I’m thinking of how those power dynamics come from a hierarchy. Like how in ballet, we call our teachers Master. There’s already an inherent social structure of hierarchy. In the ballet system, there are principals, then soloists, then corps de ballet. I’m thinking about those levels we create. And my work is about finding social solidarity, breaking down binaries to find ways of challenging those systems. These systems have existed for years, ballet began as a way to bow to Louis XIV. So how do we change that? We hear about decolonizing the space; how do we change systems? And there’s this whole notion of ‘let’s just get rid of the system; let’s just start from anew’. I don’t know if that’s a possibility right now. So how do we make change from within? I think that’s important, and my work is thinking through those spaces.”

Much of your work is based in collaboration. For this work, you’ve partnered with Noguchi Museum Senior Curator Dakin Hart and architecture and design collaborative Norman Kelley, as well as costume designer Rad Hourani and prop/set designer Jason Lewis. How does working in a collaborative environment with so much creative input affect the process of creating your own art?

“I have an idea of what I’m trying to do, make it be, how it’s articulated. And I’m working with so many people, even if it’s just my dancers, for example, it’s about communication. It’s about talking it through, letting them understand what I’m asking for, what I’m wanting them to do. It’s the same with the costume designers, the architectural firm. It’s about being transparent. It’s about having kindness and generosity for all of us, sharing and exchanging. And for me, even though it’s my project and my ideas, it’s something I get back from. People advise, and give. I work within visual arts, but I still work within the social etiquette of how I create it, of how I used to learn or perform dance. And I think that’s a really beautiful social space. The kind of space that I’m wanting for a larger community is also the one I’m creating within my practice when I’m making my work.”