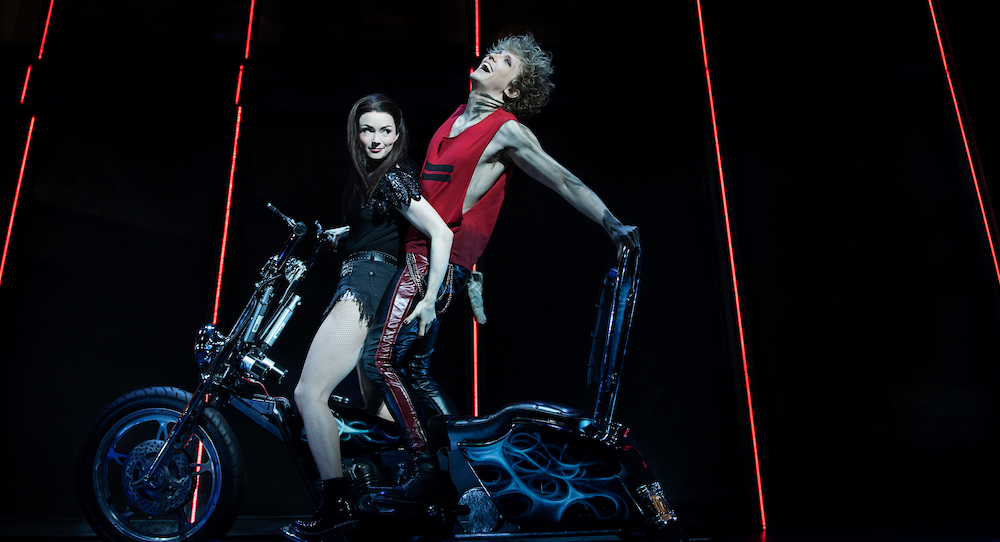 Meat Loaf in a musical? I was quite confused but certainly intrigued. Bat Out of Hell has been in the works for many years and recently made its way across the pond for a short off-Broadway run at New York City Center.

Here’s a little background… Or, at least, what I was able to gather. We’re in a dystopian future: the land of Obsidian. A gang of rebels called “The Lost” have (somehow) been mutated so that they stay 18 years old forever (and just wait, there are more Peter Pan references to come). Obsidian’s dictator, Falco, wants to destroy The Lost and restore order (Why? How? We have no idea). His daughter, Raven, predictably falls in love with Strat, the leader of The Lost (#conflict). The duo first locks eyes during a violent police raid (how romantic), Strat breaks into her bedroom, Raven rides off with Strat on his motorbike, the two star-crossed lovers break-up but eventually make-up for a very confusing albeit happy ending.

Falco comes around, too, although it’s not clear what changes his mind. Perhaps he’s just caught up in his own rocky relationship with his disengaged but simultaneously turned-on wife, Sloane. There are also some interesting subplots including Zahara, who is a member of The Lost but also acts as a maid (read: spy) in Falco’s empire; as well as Tink, the only non-mutated (i.e. not 18 forever) male member of The Lost who is in love with Strat and ultimately takes a bullet for him (I was disappointed when the audience didn’t at least try to applaud Tink back to life. But I guess the Peter Pan references only go so far). Although these side stories appear to add depth to Bat Out of Hell, they’re never fleshed out enough for us to feel truly invested.

Despite a bare book, Bat Out of Hell capitalizes on its rock ‘n’ roll roots with incredible set design and special effects. The stage includes a seemingly never-ending underground subway tunnel and an oppressive skyscraper that reads “FALCO” and rises all the way to the top of the proscenium. A fog machine, confetti cannons and strobe lights are employed at every possible moment. But the most mesmerizing technical element is a hand-held video camera that is choreographed to film the actors live throughout many of the scenes. This raw footage appears like an ’80s music video on a large billboard screen above the subway tunnel. Audiences in City Center’s nosebleed seats can appreciate the intimacy of the actors on stage, and the camera adds another moving angle to engage with the scene beyond the fourth wall.

The costumes in Bat Out of Hell are over-the-top and silly…like punk fashion meets Starmites. Xena Gusthart’s choreography is boppy and quirky but doesn’t stand up to the power, dynamics and passion of the classic rock score. Although the dancing is fun to watch (and probably to perform), Gusthart misses a great opportunity to command the show with movement that would actually help tell the story rather than simply groove to its tunes.  In her defense, Gusthart is credited as having “adapted” the choreography in Bat Out of Hell (from Emma Portner, who worked on the show previously). Yet, during its Manchester run, critic Dianne Bourne gave Bat out of Hell a five-star review, calling it “a truly staggering piece of musical theatre, which breaks new boundaries in its staging, choreography and concept on an epic scale.” I’m not sure what changed choreographically in the past year or if the staging of Bat Out of Hell simply doesn’t resonate with American audiences.

While the apocalyptic rock ‘n’ roll Romeo and Juliet vibe of Bat Out of Hell sounds captivating, sadly (and surprisingly), coherency, substance and story are nowhere to be found. The show has a spectacularly talented cast of leads, rock concert-like special effects, a score all Meat Loaf fans will head-band along to and innovative music video-like live projections. But because there are no clear stakes and no real reason for the conflict on stage, besides the spectacle of the show, we’re not invested at all.