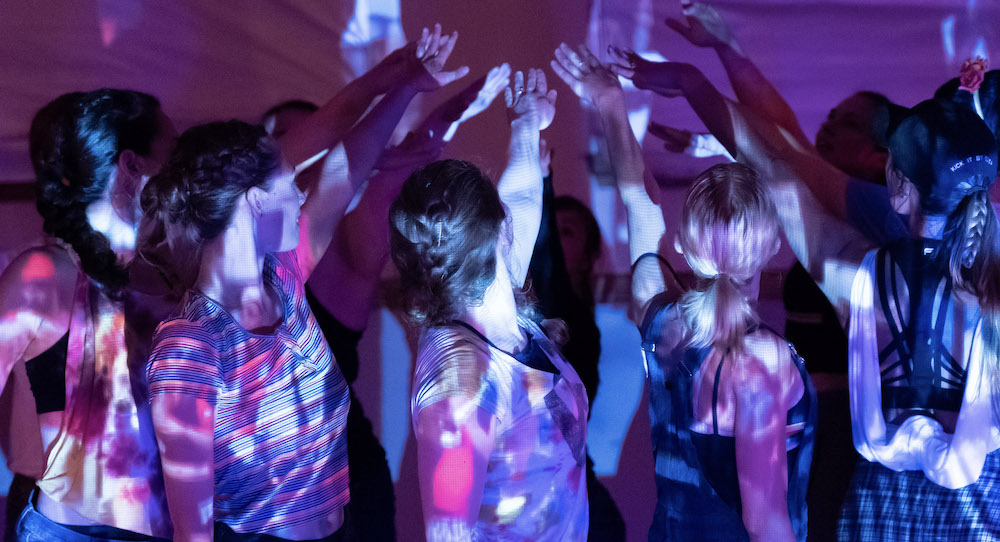 Good writers write about what they know, goes an old aphorism. Does that also hold true with choreographers? Does the most effective dance art come from a source of personal experience? That might not be a question that we can answer scientifically, yet Jennifer Kuhnberg’s What Is Love? showed that personal experience can indeed engender powerful dance art.

Kuhnberg, founder and artistic director of OnStage Dance Company, choreographed the program from her experience as a lesbian woman. The concepts were gripping, and the performances fully invested. Two things in particular stuck out in Kuhnberg’s choreographic work — strong musicality and fresh movement vocabulary. Clever, unique choices in these and other areas were evident from the first piece, “Astronaut”.

Dancers began the piece at the back of the house, as far from the audience as possible, as if glued to the wall there. Lights were low, and in red and blue (lighting design by Jason Ries). All of these things combined, I felt an air of mystery. At once, the dancers ran forward towards the audience as well as spread out through the stage space. They danced their own movement, but all moved with frenetic energy that matched the score (“Astronaut” by Amanda Palmer). The dancers settled into formation in lines and moved in unison, creating stark contrast to what just came before.

The way the blue lights at the side of the stage lit the dancers as they moved also felt satisfyingly dramatic. The unison movement shifted closer to the ground and returned to that frenetic quality. Kuhnberg was hitting upon a plethora of different ways that the group could move — in quality, in space, in relation to the music. Movement seemed to convey strength and determination, even a sense of fight — flexed feet, knees raising, arms punching downwards. The movement overall had a unique, compelling blend of circle and angle in its shape.

Further alternating between unison and individual movement filled up the rest of the piece’s structure, also including some striking partnering. To end the piece, the dancers returned to the back wall, staying seemingly glued there just as they were at the beginning of the piece. This structure spoke to finding freedom but then coming back to confinement, apart from being a simply unique, intriguing creative choice.

“Youth” came two numbers later. Like many other pieces in the program, it used voiceover as a poetically concise way to reinforce theme and meaning. Dancers walked through the space as voiceover from Tiffany Graham’s TEDxUSD talk cited alarming conditions of LGBT homeless youth. They all wore backpacks, and some had hoodie hoods on. A rough, raw atmosphere was evident from the start.

Soon enough music (“Youth” by Daughter) replaced the voiceover. The dancers shifted into “window boxes” (staggered lines so that all could be seen) and began to move in unison. The organization coming here gave pleasing form to that raw atmosphere, which was still present and evocative. The movement hit musical accents in a very satisfying way — in one memorable phrase, hands to one hip and then the other, one arm reaching up and then one leg exploding back with a bent knee.

The dancers broke out of unison at certain points, resulting in some particularly striking moments. As one, a few dancers supported one other dancer, helping her to stand. She at first seemed to resist the help. This choreographic choice spoke volumes about giving and receiving support in difficult times (for the receiver and giver). The dancers walked off with their backpacks. There was a sense that they had no choice but to continue on, despite the challenges that they face. I was left saddened, but also inspired by the strength and resilience of such young people.

“Flowers” was a memorable solo in the second act, performed and choreographed in collaboration with Marisa Cohen. Voiceover was again effective in poetically conveying message. It conveyed the divorce experience of a lesbian woman. The level of energy and attack in Cohen’s movement aligned with the ebbs and flows in the voiceover. Virtuosic movement, such as a strikingly controlled shoulder roll into a split held in the air, melted into moments more about her emotions and the drama of it all.

In some of those moments more focused on theatricality, she spread papers and other objects around the space, around a few tables (evoking a home space). It was as if she wanted her physical environment to reflect her mental environment. At certain other memorable points, she rested on one of the tables, as if her mental and emotional struggle made supporting her own weight too much to handle. Overall, the work demonstrated how theatricality and complex movement can come together to create something truly meaningful.

“I’m in Here” was striking conceptually. Three dancers — Sarah Drinkwater, Teresa Farella, and Alice Rufo) — dressed and undressed, each with their own mirror. It illustrated women struggling with body image while also wanting to be seen for more than their appearance. The presence of this theme in this particular program underscored how lesbian women share the triumphs and struggles of women at large.

“Kissing You” took that even further, illustrating dynamics within a lesbian relationship that are just like those in heterosexual relationships. It does seem as if Kuhnberg’s experience allowed her to bring these truths forth in this program. Her unique choreographic voice, clever use of music and voiceover, and the cast’s adept commitment only bolstered that strength. It all came together to offer a meaningful, memorable product.

Nowadays conversations about identity and protecting the marginalized amongst us abound. Artists with directly related experience in these conversations can make a true impact upon them with their work — particularly work as well-done as Kuhnberg’s What is Love?