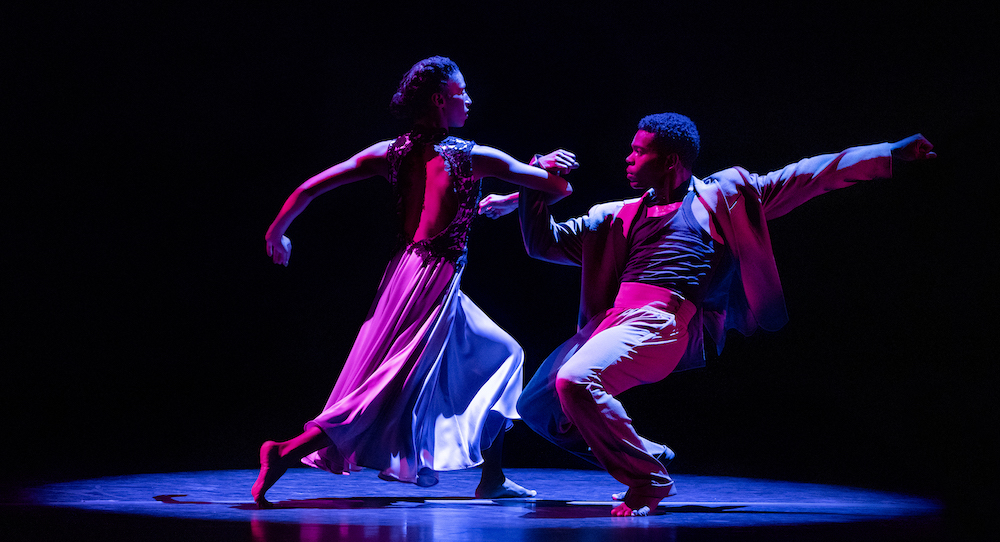 In dancemaking, there’s the meaning of the work at hand (the beauty of the human body’s movement being a totally valid meaning). There’s also the artist’s motivation — the “why I made this work”, if you will. The two are often closely related, yet can most often be parsed apart. Both being clear and intentional can create some truly striking work. Also striking can be how these varied meanings and motivation can come together in a program of diverse works. Alvin Ailey American Dance Theater’s Summer Season at Lincoln Center had these matters moving through my brain like a cyclone. Experiencing the works, however, I only felt captivated and satisfied.

Darrell Grand Moultrie‘s An Ounce of Faith opened the program. An opening solo, oozing with determination and power, had the dancer in the group and then in front of it. The curtain dropped behind her as she moved past the proscenium. This development began to build the idea of the individual finding themselves, but from a foundation of support. She executed a movement motif with powerful resonance to the meaning of the piece — a slow penché (body sloping from head to toe, at 45 degrees) and then a curving in of that leg into the chest. It spoke to taking that “leap of faith”, to be daring and to trust — but also a coming back to something grounded and safe from time to time.

The curtain rose on the group again, costumes and lighting in bright, joyous colors (lighting by Mark Stanley, costumes by Mark Eric). The size and energy of the movement had the same brightness and joy. Footwork was quick and varied, frenetic but not too much to digest. Abstract gesture blended with more technical movement, interwoven but distinct — like colors in a tapestry. It all stayed energetic and multifaceted, solos leading into trios and circles leading into lines. Then came a section that struck me as lovely, and heartfelt, yet more effective structurally if it were swapped with the section that preceded it. The dancers moved slowly, as if through molasses, while voiceover poetically described the power of some having an “ounce of faith in you,” as someone had in Moultrie himself.

The meaning, and motivation, of the piece then seemed to have a very personal meaning for Moultrie. For me, that connection made the work resonate even more for me. “Sometimes you just have to stand in gratefulness,” said the voiceover, which struck me as particularly resonant. While this and its preceding section were themselves clear, powerful, and pleasing, it seemed to me that narrative arc and clarity might have been stronger with the two parts switched; the slower section could have offered more narrative context and allowed energy to grow. Perhaps Moultrie was looking to vary energetic qualities, which is certainly a legitimate goal.

Energy picked up again for most of the piece, a feast of energy and joy. Unison in lines into solos, there were many varied sections — yet, somehow each felt like enough, a little package tied off with a neat bow. Another motif emerged — little hops with one foot extended and flexed, as well as hands flexed. In this, I felt determination, action and strength. Culturally African inflections in the music and movement lent themselves to a groundedness in the movement quality, even as it was balanced with a lift through the body. To end, all the dancers reached up together. They were resolute and united. They needed faith and community to get there, and get there they did.

Ronald K. Brown’s The Call followed, another melange of color and movement qualities. It began with two dancers, and others joined until there were five. This accumulating made me think of the title; it was if something called the additional dancers to the stage. A turning, circulating sense soon built, dancers turning and coming in and out of circular formations. Movement vocabulary such as straight arms coming out from shoulders, like helicopter blades, further built that circulating quality. Also notable was a stateliness and elegance, a classically lifted carriage through the body and flowing costumes (dresses for the women and loose cuts for the men, by Keiko Voltaire). An element of groove came in, spine undulating, even with classically-styled music.

A further tonal shift emerged, lighting turning to purples and movement softening (lighting by Tsubasa Kamei). I thought about how lavender is a soothing natural substance. Whipping, creamy-soft movement, such as fouettés, also added to that softer quality. Exaggerated hip action through these movements kept a sense of energetic flair and individuality, however. The prior colors and feeling returned, bringing that groovy feel back. Circling also returned. Another shift came with classical Indian music, along with another lighting shift to green and orange. Spinal undulation returned, now fitting with the new music.

This shift in the movement, primarily by the movement, spoke to a natural “call” of creative harmony. The dancers also seemed called to the dance itself, in whatever quality it came to, full of dedication and commitment as they were. Fast turning like a Whirling Dervish came in, leading into an end to the piece of looking up — as if in praise. “The call” therein became a spiritual one. I did wonder if some sections could have brought more impact if shorter. Overall, however, the work left me intrigued yet also content.

Jawole Willa Jo Zollar’s Shelter came next, a work rich and layered in meaning. Voiceover spoke of an experience of observing continued homelessness, and all of the emotions that can accompany doing so — sadness for the person, rage at a culture that would let it happen, and fear that one could someday be in the same state, and more. Poetically evocative statements such as “exhaustion with red tape mixing with rage” pulled me right in.

Movement had an intensity to match the power in the words,  yet retained an organization (such as in formations) to keep it all clear and digestible. Flexed feet in turns brought a feeling of resoluteness and strength. Grounded African dance vocabulary blended with that of contemporary dance, creating something like a silky smooth batter with the ingredients’ separate tastes all distinct in the end; the forms blended, but somehow still legible in their own natures.

Repetition in the voiceover added to the intensity and sense of mental turbulence. “Running, walking, running, walking,” it pronounced, sharing the dialogue of one caught in those feelings arising with seeing a homeless person. It can feel so much easier to not face it. Some of the dancers literally running added to this intensity. A play on leapfrog made me think of reverting to innocent, childlike comforts — some of which relate to escape and diversion, its own kind of running.

Soon there was a shift to the voiceover discussing environmentalism. If one is tuned into the sociopolitical discourse, this connection might have very well made sense (à la “the Green New Deal”). If one isn’t, this thematic shift and pairing might have felt discordant. Admittedly, even as one of those people very tuned into contemporary discourse on politics and policy, the connection did take me a moment.

On the other hand, the title of Shelter offers a cue to how environmentalism and homelessness are related; the earth is our home, our shelter, just as our literal homes are our shelter. Jo Zollar’s meaning was crystal-clear, and it seems that her passion around these issues is also quite clear. Sometimes when passion leads to clear motivation for making work, the rest is something truly memorable and meaningful. The program ended with Revelations, arguably one of the most — if not the most — memorable and meaningful work of contemporary dance ever made. Motivation to illustrate meaning can be a powerful thing indeed.