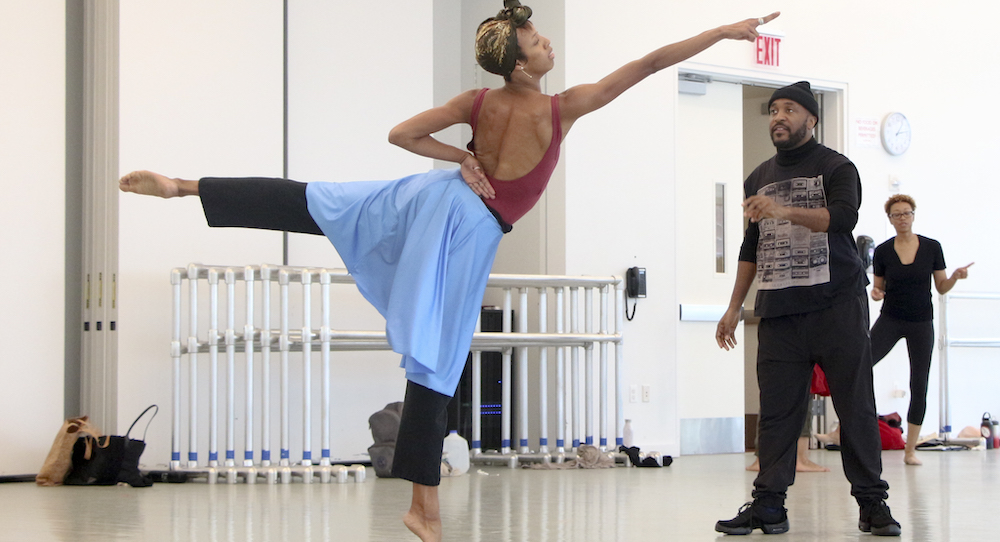 A tendu is a tendu, a jeté is a jeté, and a pirouette is a pirouette. When does movement go beyond that to become art? When does a dancer transcend the steps to truly be an artist? Darrell Grand Moultrie truly teaches and makes dance art with this consciousness of dance art being more than just movement (as lovely as it might be). He shows and tells that it is found in every choreographer and every dancer finding that thing that is uniquely theirs, through reaching and looking higher, and then bringing that to life. 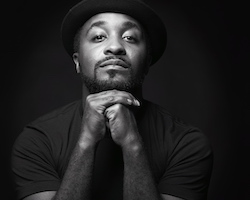 Dance Informa speaks with Moultrie about his upcoming premiere at Lincoln Center with Alvin Ailey American Dance Theater (AAADT), his eclectic life in dance art and how it all started with someone having “an ounce of faith” in him. Moultrie grew up in Harlem, in “the projects,” he says. He asserts that although there is violence in the inner city, there is also “so much love” — and that that’s too often forgotten. He describes going back to his old neighborhood nowadays and people saying things like, “You still doin’ that dance stuff? Keep doing it!” Moultrie believes that “they might not understand what [I’m] doing, but they can appreciate it.”

This love within the inner city is arguably the seed of what he became as an artist; he describes how when he was in third grade, a teacher, Gwendolyn McLoud, saw something in him, and made him sign a bit of an unusual contract. The terms of the agreement were that if Moultrie put in all of the effort he could and did everything he could be expected to do — getting good grades in school, always showing up on time, drinking water, making healthy food choices, staying away from substances, and the like — this teacher would pay for everything he could possibly need to train in the arts (gear, classes, travel expenses and more). “We both kept our sides of the bargain,” Moultrie says with a bit of a laugh. 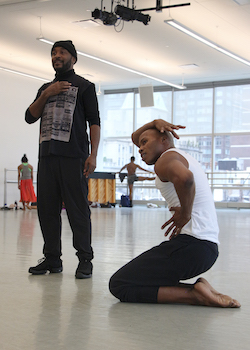 Jeroboam Bozeman and Darrell G. Moultrie in rehearsal for ‘Ounce of Faith’. Photo by Nicole Tintle.

After training at Fiorello H. LaGuardia High School of Music & Art and Performing Arts, and at The Juilliard School, Moultrie has racked up one choreographic credit and honor after another. It seems that he’s just about done it all — from choreographing for Beyoncé to opera to musical theater to concert dance. He loves the idea of eclecticism, of having experience and abilities in a variety of styles. “It keeps you fresh,” he believes, “because your brain can’t lock into one way of learning.” He’s particularly enjoyed choreographing an opera in Spain (using Flamenco movement vocabulary), working with ballets and working with university students, he shares. Now, he’s currently setting work on the iconic AAADT. Moultrie first saw the company perform 31 years ago, and it inspired him to be a choreographer. To be setting a world premiere on the company now feels “surreal. I’m overwhelmed,” he says.

The work, part of the Lincoln Center program to be presented June 12-16, is entitled An Ounce of Faith. It’s about the power of “someone taking an ounce of faith in you, like someone did for me,” he shares. “The piece is a way to honor [that teacher], in an abstract way, as well as to bring in audiences into that experience.” He calls this honoring, and sharing this idea of someone investing you being incredibly powerful, the “giveback”.

“I want to be an example of what can happen when you expose kids to the arts, and when you really invest in someone,” Moultrie says.

Moultrie describes a bit of his process making the work. He’s worked with about 75 percent of the dancers before, and therefore hasn’t worked with 25 percent of them, he shares. At the point of speaking with Dance Informa, he had been in rehearsal to make the work for two days. These first days were for working with the dancers to see how they work with one another — who pairs well with whom, for instance. On the third day, it was time to start setting work. “In this short amount of time, you really just have to jump in and make the work,” he says. 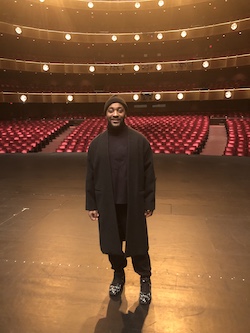 At a recent talkback, someone asked him if he comes into rehearsal with movement, or if he waits to have the dancers in front of him to create choreography. “I absolutely wait for the dancers, because they all have something unique to offer,” he asserts. In group work, he aims for “collective freedom”, wherein the dancers are together (in clean unison timing, where intended, for example) but each move and breath as their own person and artist. He says he guides dancers to perform with a “sense of abandonment, to show rather than tell the audience what to see. Remain open as an artist, and choreographers will see that, which is something that they can finesse.”

Moultrie taught a workshop at Ailey Extension on May 9, in which this approach of bringing out the best in each dancer was front-and-center. From the warm-up to the closing discussion, Moultrie emphasized adding one’s own color to the movement — in so doing, taking the steps and making them dance art. In a phrase of abstract gesture, for instance, he would say, “Make it your own language.” He urged dancers to extend their vision (both literally and metaphorically), reach further and to always believe in what they’re doing. Moultrie described loving working with kids, challenging them but showing them immense love. Illustrating this, there was one 13-year-old dancer in the workshop whom he pushed to not be late on the same count for a second time. “We’ve got to get you ready for the world,” Moultrie said with a chuckle that showed that blend of love and high expectations. Regarding this guiding of young people, Moultrie asserts that he “want[s] to be a stamp on their lives.” 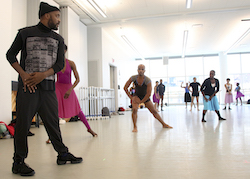 Behind the scenes of Darrell G. Moultrie’s ‘Ounce of Faith’. Photo by Nicole Tintle.

Now that Moultrie has achieved setting a work on AAADT, what’s next? He wants to keep working with new dancers and new companies. He wants to “sink his teeth” into  more experimental work, to “dive into that more, to tell those kinds of stories.” He’d also love to direct television and film, as he really enjoys working with actors, he says. He wants to keep exploring different styles and keep his work eclectic. He explains how many people will read about his career and “go right to Beyoncé”, but he would love if, say, an African-American boy in the inner city would rather say, “You did opera?” and think that’s cool and possible to achieve.

If he could speak to that boy, or anyone dreaming to do the kind of thing he does, he says that he’d tell them to “extend your vision beyond the harshness of your reality. You are not what’s around you, it’s not all you are, but don’t run from it.” After a beat, with joy in his voice, he adds, “and don’t forget the love!” Looking back on it all now, he recognizes all that he’s done and experienced as an artist, and all of the support that he’s had. “It really does take a village, plus that one person who puts that ounce of faith in you,” he shares.