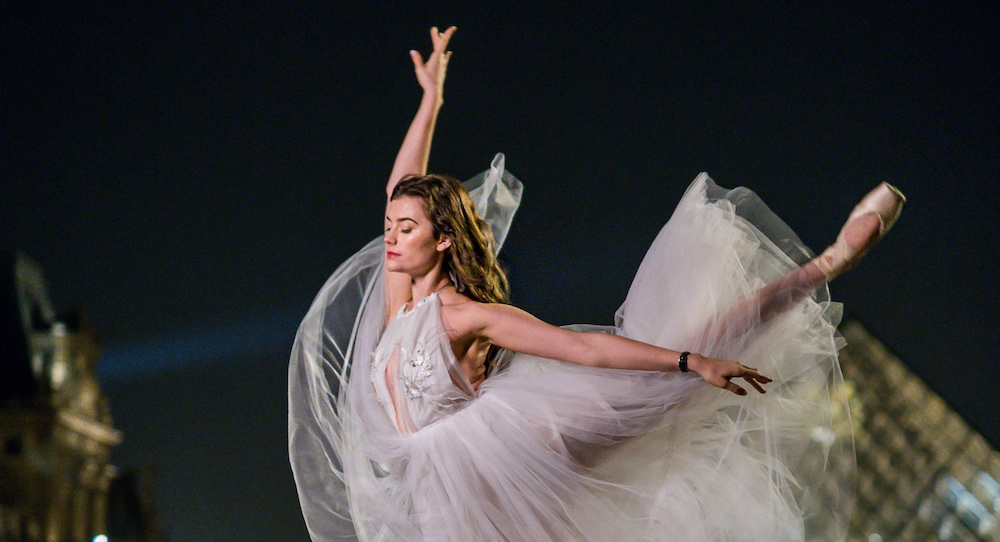 Ballerina, model and Só Dança ambassador Brittany Cavaco lives every dancer’s dream and confronts every dancer’s nightmare in the new dance film, Until Midnight, directed by Christopher Alexander. A story of love and loss, the film follows ballerina Louise (played by Cavaco), who magically finds herself young and able to dance again after almost 30 years, as she promenades through the streets of Paris in search of her late husband and dance partner, Jean Pierre (Sebastien Thill). 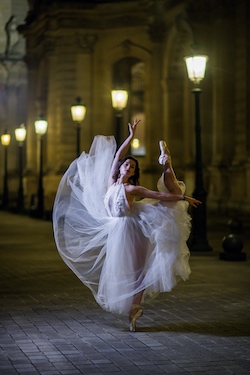 Draped in a flowing pearly white dress and clad in pointe shoes, Cavaco floats through historic landmarks of Paris, in the velvety darkness of night, illuminated by the glow of street lamps and, at times, the sparkling lights of the Eiffel Tower. She luxuriates in each movement as if a treasure that might disappear at any moment. Yet her wistful and searching gaze suggest a deep longing. Expressivity radiates from every turn of her head and développé.

A consciousness of the impermanence of the things and people we love drives the narrative of the film. The opening images of the aged Louise (Louise Schirmer), her hands withered and her hair gray, struggling to stand and her wistful examination of pictures from her performance career, call to mind a fear shared by many dancers.

Cavaco, although only 23, says she can relate to Louise’s story. With five years of dancing professionally under her belt, she is aware of the brevity of a performance career. To prepare for the role, she asked herself the question, what if she could never dance again? Her conclusion? She would relish in the moments when she could dance. This simple conclusion brings power to her performance. With each indulgent chaîné, renversé and épaulement, Cavaco’s passion and gratitude for her art form breathes life into her character.

There is more to the narrative than the gift of regaining the ability to dance again. Romance and reflection are key elements, according to Cavaco. “Louise reflects on losing her husband and her ability to dance,” she explains. In the film, the memory of her lost husband is a constant presence as he follows a few steps behind intuitively responding to each of her port de bras. He tenderly echoes her every move, a watchful shadow. He vanishes like smoke, however, before Louise can wrap her arms around him. His absence elicits a feeling of losing a lover, a companion and a partner. The image of Cavaco slumped on the empty cobblestone street serves as an evocative reminder that love and life are temporary. 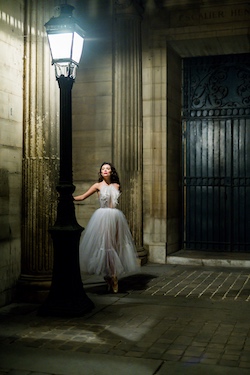 Rather than set choreography for the duet, Cavaco and Thill decided to use improvisation, which they coordinated before filming each scene. Cavaco says getting to choreograph in addition to dancing was one of the most enjoyable parts of the creative process. “I felt so empowered when we started filming.” In particular, she loved the problem-solving, the freedom to go with the flow and the ability to explore. And with filming in an outside location at night, plenty of opportunities to do so presented themselves. According to Cavaco, some of these challenges included birds flying into shots, adjusting movements to accommodate uneven surfaces and street lamps that would turn off in the middle of a scene if a phrase was not timed exactly right. Needless to say, the cobblestone streets were not kind to her Só Dança pointe shoes.

Despite the challenges, the historic architecture in the city of romance and the birthplace of ballet provide the film with a magical world perfect for a story of love, loss and gratitude. “It was absolutely unreal,” says Cavaco of dancing in the city. “It’s one of my favorite stages I’ve ever danced on.” She explains that the location allowed her more freedom to artistically explore because “dancing in the corridor of the Louvre is so vastly different from dancing on a marley stage.”

Not only are glimpses of Le Musée de Louvre, Le Pont de Bir-Hakeim and La Tour Eiffel stunning, but their elegance is also reminiscent of Louise’s grace even as she ages. As the birthplace of ballet, the Paris scenery emphasizes the historic significance of ballet, its evolution and its enduring beauty.

The combination of a narrative with universal themes, Cavaco’s expressivity and an urban setting position the film to appeal to a broader audience. Cavaco believes the film breaks the stereotype that ballet is out-of-date and unrelatable because it takes ballet out of the stage and brings it to the people. “We think that because ballet is disciplined, it has to stay within the three walls of the stage,” muses Cavaco, “but there is no reason it has to.” 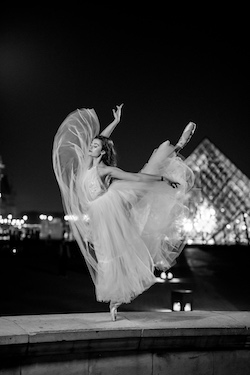 The medium of film also allows ballet to reach audiences it would not have otherwise. Since the release of Until Midnight, Cavaco has received an outpouring of responses on social media. She says people who had never seen a ballet before messaged her that the film inspired them to go see one. Others, she says, told her the film motivated them to take a ballet class again for the first time in years. One man who was grieving the recent loss of his wife reached out to tell her how much the film resonated with him even though he had no background in dance. The fact that the film resonates with so many people, that they feel something, is exactly the response Cavaco hoped for.

While her character’s time to dance may have ended at midnight, Cavaco’s career is still on the rise. She notes that although she loves the freedom of dancing on film, she still loves performing on stage. Currently, she is dancing with the English National Ballet and will continue to partner with Só Dança. As for extending the reach of ballet, Cavaco avidly uses social media and partners with other artists and companies to advocate for the art form and usher new audiences into performances and classes.