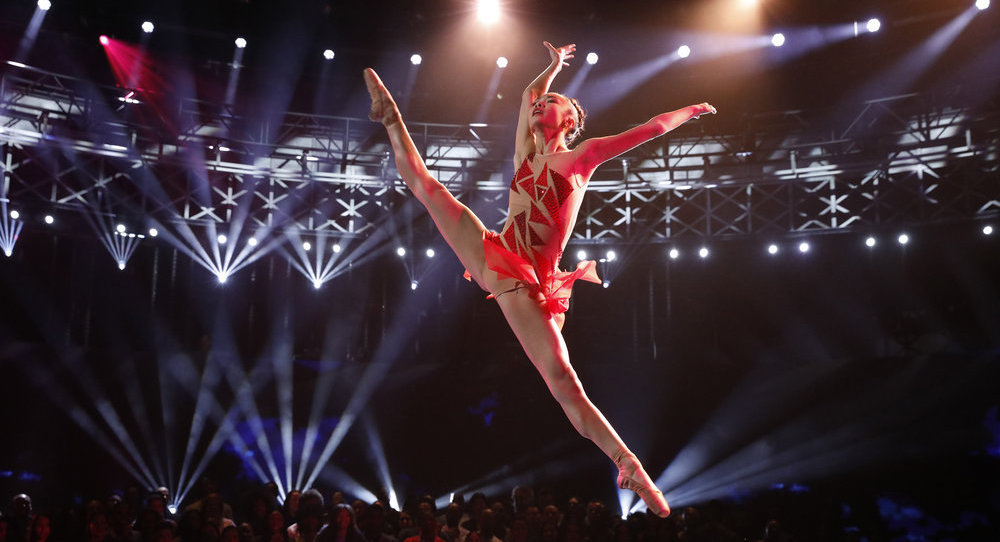 The World of Dance competition continued to heat up as the Junior Division numbers had the chance to compete to get one step closer to the ultimate prize. Everything was on the line in this round, as each act went head to head in hopes of moving on to the Cut. The two highest scoring eliminated acts would have a chance at redemption to secure the remaining spot in the Cut. This was sure to be a high-stakes round for the Junior Division as hip hop duo Audrey and Mia battled it out with Ellie and Ava.

Ellie and Ava delivered a heartfelt lyrical number in this round along with a well thought out storyline. They complimented each part of the music with a mixture of contemporary movement that almost resembled hip hop but with a graceful twist. Ellie and Ava were the picture of beauty and grace that was amplified by their athleticism, amazing turns and beautifully executed tricks. Audrey and Mia came through swinging with a hip hop routine that they were confident would shut down their opponents. This hard-hitting routine started out with a bang as the girls hit every transition and pop. Audrey and Mia served up a fun and entertaining routine with a splash of grittiness. They brought fire to the stage and gave justice to the word “duel”. Ellie and Ava took this round, scoring a 91.7.

It was contemporary ballet versus funk in the next face-off, as Kayla Mak and Funkanometry hit the stage next. Kayla Mak did not hold back in this round after being challenged to incorporate more musicality after the Qualifiers round. She filled every piece of the music with ease during her performance. Kayla even went as far as to incorporate hip hop into her routine, which was unexpected but well received. Her performance was a dynamic and brilliant form of “battle ballet,” as Ne-Yo put it. Funkanometry switched up their vibe from the Qualifiers round by tightening up their choreography. They were a completely different duo during this particular performance, which was shown in the intensity and attack of the performance. Funkanometry brought pure entertainment to the stage and claimed this battle after scoring a 91.7, which left Kayla Mak in the running for Redemption.

The competition continued to gain speed as Aydin Eyikan battled Moving 4ward for a spot in the Cut. It was an all contemporary match-up to rival all matches. Aydin’s performance started with fire from the very beginning. With the challenge to use more musicality in his choreography, Aydin put special detail into each movement. His transitions were seamless, and he had a sort of spark to his routine that was missing in the Qualifiers round. There was an attack to Aydin’s choreography that left the judges wanting to see more. With the same correction about working on musicality, Moving 4ward matched their movements to the music in ways that were not expected. There were beautiful partnering elements between each member and that was match with synchronicity that was through the roof. Moving 4ward’s performance was one big burst of emotion which was seen throughout. They were not only physically in sync but emotionally as well. Moving 4ward’s emotional routine snagged them a spot in the Cut with a score of 93.0.

Contemporary versus tap was the name of the game in the final round of the Junior Division duel. Lauren Yakima faced House of Tap in what was an explosion of talent. Lauren showed amazing strength and versatility in her routine. She switched up the vibe of her contemporary routine with a splash of jazz mixed in. Her technique was undeniable as she showed great athleticism and artistry throughout each movement. Lauren’s performance was 100 percent powerful, and she left everything out on the floor. Known for their unique approach to tap choreography, House of Tap threw in some hip hop to their routine, along with super clean footwork. House of Tap possessed synchronicity that was unbelievable. Their musicality was off the charts as they lit the stage on fire. House of Tap’s performance even earned a standing ovation from Ne-Yo and Derek Hough. Lauren Yakima took this round by storm scoring a 96.0. This left House of Tap with a chance at Redemption.

The Redemption round was one to remember as House of Tap went head to head with Kayla Mak. This was the last chance to wow the judges and secure the final spot in the Cut. House of Tap handled themselves beautifully with an unexpected music choice that most would not see tap going with. They complimented the music effortlessly through each series of tap steps. It was a great way to fight for the final. Dancing to the same music choice, Kayla Mak was graceful with each movement but packed a punch in various elements of her routine. She showed great strength and control as she danced en pointe and brought a whole new meaning to how pointe can be performed. Although both acts did an exceptional job, by unanimous vote, Kayla Mak snagged the final spot in the Cut for her division.

What other deserving numbers will cruise their way in to the Cut round? Check out the final round of The Duels to see what will happen next!