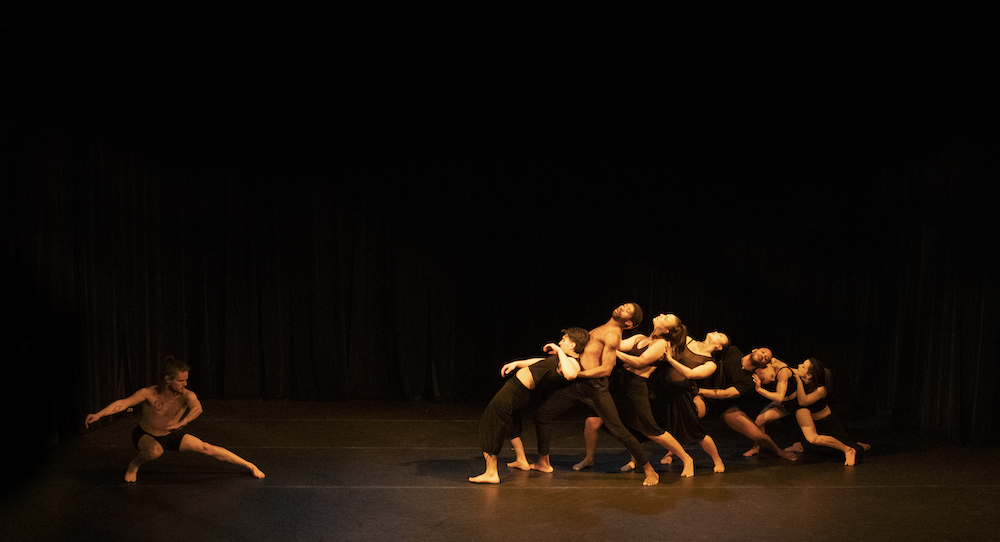 Wonderful dancing is wonderful dancing. It alone can be more than enough to create an engaging, memorable work of dance art. Yet strong meaning, personal to the choreographer or not, can add another layer of wonder to the work. Clear meaning, conveyed through various stylistic penchants and approaches, can keep viewers genuinely genuinely. Urbanity NeXt, under Urbanity Dance (Boston), is an initiative in its third year to open up a space for various choreographers to present their works (through an application process). This year’s show had several with strong meaning coming through. That meaning become storytelling, in various forms that storytelling can take.

This year’s program was also certainly an eclectic one, not only in that varied choreographic styling but in a presence of both classical and contemporary dance signatures (in movement and overall aesthetic package — with music, lighting, and costuming). This added another layer to make the illustration of a story in each piece all the more intriguing and inventive. 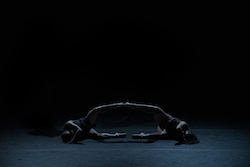 Betsi Graves, Urbanity Dance’s founder and artistic director, welcomed the audience with a short speech after the first piece. This sequence was a somewhat unusual, yet seemingly effective, choice; the first piece could pull audience members right into the afternoon of dancing, where they could be — more fully engaged — as Graves addressed housekeeping and related matters. She also described a wide range of programs under Urbanity’s big umbrella, all offering movement as a means to empower all sorts of local individuals through dance. The meaning of the company itself felt clear, through this mission of enhancing the local community — and the lives of its members — through dance.

Urbanity Dance company member Dorothy Cherry choreographed that first piece, [un]entitled. In a post-show Q&A, she discussed how discussions around privilege with the dancers (the full company of nine), and her own experience as a woman of color, inspired the work. She affirmed how the company is very diverse, which allowed for rich conversation on the matter through the rehearsal process. The piece opened in almost darkness, very low lighting making opening movements just barely visible. I was pulled right in. “Take / a step forward”, said narration, and bright lights arose. In the lens of privilege (or lack thereof), one might ask who is allowed, and who feels entitled, to take that step forward.

With lights rising came an explosion of action, various leaps and lifts — all with the dexterity of a gazelle — happening all across the stage. Balletic signatures were present, such as a lift in arabesque, yet there was also a rawness and release into gravity’s pull that was very much of contemporary dance. Compelling gestures, such as one arm slowly rising to the sky and elbows initiating movement in opposite directions, also enlivened the movement. A mood shift came with musical notes in the score (Carlos Del Castillo’s Un[en]titled) deepening, lights lowering and movement becoming more restless.

Lights were brighter towards upstage, where all the dancers stood in line. They shifted back and forth through their torsos, but seemed glued to their spots through their lower bodies. As concerns privilege, it seems that this idea of being stuck while also finding movement and self-expression — within various identities — can speak volumes. One dancer managed to break from the line, and others followed.

With this development, a new spirit of exploring space and physical possibilities — through levels, joint initiations, and areas of the stage — seemed present. Eventually, one by one, they fell to the floor and lay in an “x” shape. Did that new exploration cause the fall? It was hard to know. One dancer remained standing as the lights lowered. This was another moment with the potential to speak volumes about the subject matter, in the sense of one’s reckoning with privilege in their own life.

“Take / a step forwards”, the narration said again. I wondered what effect this narration might have had in additional places in the piece, as well as variations on it (“../ a step to the side”, “…backwards”, et cetera). This voiceover paired with movement, the possibilities for speaking to how one must move to navigate privilege seem ripe for the probing. Yet, all in all, the work was a striking and memorable movement exploration of an important, inescapable part of modern life and discourse.

Second in Act II was piece of mind, choreographed by Cayley Christoforou (also artistic operations and social media manager for Urbanity Dance). There was a mysterious angst to the work throughout, a feeling dramatic enough to be salient but not so dramatic as to be kitschy or cheap. Christoforou explained in that post show talk how a very prevalent personal experience inspired the work — often being told that she’s  always very composed and calm, while her inner experience feels far more chaotic.

Costumes of black pants and tops with silver tears, along with an instrumental score sounding like punk-rock music dressed up nice (Brim and I Am Winter [Kiasmos Mix] by Cayley Christoforou), greatly contributed to this feeling of chaos beneath something far more composed. A long diagonal line, moving from upstage right to downstage left, evolved into a duet, then a trio, then a quartet. There was a constant sense of shift and change, an organized chaos.

Unique gesture and shaping of momentum jazzed up technical, virtuosic movements. One memorable phrase is a perfect example of this overall quality; dancers swept arms across their face and down by their sides — concealing and revealing — to leap off two feet and land on one. The dancers’ breath, and its powering of the often very athletic movement, was also salient. On a few occasions, breath out in unison complemented a lowering of the movement in space — a resolution, a momentary rest from the chaos.

Overall, change in tempo (including that of stillness) was also salient, and quite pleasing; Christoforou seems to understand the power of the pause, to make impressively fast movement elsewhere more meaningful, and in this piece capable of speaking to its overall message. A musical shift came towards the end, with movement somehow becoming more formalized yet more chaotic; increased rise and fall met increased angularity within movement.

To end, from standing, dancers spilled their head towards the floor and then turned on two feet. One arm  rose with this turn for the cast to then bow together. I wondered how this ending could have been more drawn out and layered. As compared with the dramatic nature of the work, it felt a bit anticlimactic. Nevertheless, the work used skillful shaping of inventive movement to convey a feeling of something unsettled underneath something calmer.

Tux. (choreographed by company member Styles Alexander and danced by three other company members) in the first act peppered a contemporary dance idiom with social dance movements to, along with formalwear costumes, illustrate the feelings and thoughts that can accompany the teenage milestone of “prom”. Appartenir called upon a contemporary ballet expression to bring a feeling of harmony and community, inspired by the community of Urbanity Dance itself, explained the choreographer Carrie Kerstein. All of these works considered, Urbanity Dance in Urbanity NeXt demonstrated the power of dance to tell a story — of narrative, of personal experience, of shared cultural milestones, and much more.