The Oxford Dictionary defines “substrate” as an “underlying substance or layer.” In Substrate Independent, Urbanity Dance conveyed the idea of independence underlying a presence of communal action and energy. Jacob Regan, also a dancer in the company, choreographed the original work. Also underlying the show was a celebratory spirit of performing in the space, Urbanity’s new office, class and performance space, for the first time. The Boston-based company seeks to  “engage, inspire and empower individuals and communities through the art of dance and movement.”

Artistic Director Betsi Graves spoke to open up the show, expressing gratitude for all attending this inaugural performance, as well as the generous gift from Peter Roth that made it possible. A few rows of chairs were set up in the rectangle-shaped room, with makeshift walls covered in white paper. As people entered to attend the show, they were told that – because it was an “immersive experience” – they were free to move freely around the space and even to draw on the walls. Thus, as Graves spoke, there were already scribblings and clearer images on these white makeshift walls.

The movement began with a soloist, Meg Anderson, taking center stage as two other dancers moved on and around the walls. While Anderson was expressive and expansive, seeming to want to fully explore the space, the two other dancers clung to “home base” on the wall and moved in smaller, more introspective ways. The soloist’s movement took on the feel of a windmill having gained a mind of its own – continuously moving in patterns, sometimes circular and sometimes other shapes (including “cactus” arms and turning low on one foot with the other leg extended) – as if off-kilter. 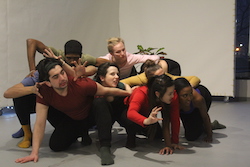 Then a larger group entered in a clump and made gestures in unison, opening and closing hands to evoke birds’ wings. This clump dispersed, re-forming into a smaller clump and a duet stage right. Lift and expansiveness met more introspective contact improvisation-inspired partnering to offer a mix of the independent and interdependent in movement. In addition, a score of flowing water contrasted more the more accented, concrete sounds of the dancers’ moving feet – mirroring the contrast of accented and more fully continuous movement in the duet.

Soon enough, brighter lights came up, and the flowing water score ceased. The full cast moved around the space in different ways – some in slow motion, one crawling on her forearms and others writing on the walls. This was more on the independent side of the independent and communal present within the piece, yet a communal energy remained. It all felt like a mirroring of how even when we in modern society act independently, we still share energy and space.

Humor also soon became a quite pleasant aspect at play. Part of this played out through “breaking the fourth wall”, engaging audience members in the performance, on a few different occasions. With one audience member, a dancer placed a piece of tape on her foot, and all the dancers gathered around to stare at the tape in fascination. Humorous touches came in moments such as the person pointing her foot and one of the dancers flexing it again. It felt like one of those nuggets of physical humor that must be experienced to be appreciated as genuinely funny.

Another instance of this “breaking the fourth wall” was with dancer Alex Davis calling up another audience member to trace his shape along the white wall. She didn’t want to do it at first, but he coaxed her to. All the while, a memorable duet played out center stage. The dancers shook through their body and then transferred the shaking into their hands. Turning and lunging in clean geometry brought them apart, and then back together to hold hands. They leaned back from there away from each other. Their independence lay within their unity.

The full group returned and reached up together, in a powerful moment of unity. From them curling inward together, the dancers went into individual phrases. Was the individuality there all the while, underneath the joined movement? That may be a philosophical “chicken or egg” type question, but nevertheless an intriguing one to ponder. Unison movement returned, with a striking phrase in which falling and turning brought a sense of torque force.

Davis then came center stage with a humorous solo of both speech and movement. He made a “rawwwr!” growling sound, resurrecting the growl that had come a few times before. The quirkiness of this played into the idea of finding independence in a group, as well as offered a sense of innocent warmth in its childlike quality. Davis then jumped up to touch a part of the structure and halfway played off like it was a big deal, and halfway that it was just his “job, ya know, as a dancer.”

The audience cheered and laughed. “I can do it again, ya know,” he said, with hilarious faux bashfulness, and indeed did do it again to more cheers. The rest of the group stood behind in tableau all the while, the group in which this humorous individual fit. Davis also described thriving off applause, and where that came from for him. This speech surfaced meta ideas about performance and performers, but also how we as individuals interact with praise from others – an evolving conversation in this social media-driven age.

To end his solo, Davis danced with more complexity and virtuosity than he had yet. Quick weight shifts and asymmetrical turns again brought the sense of a windmill gone off kilter. The group returned, to take walking patterns as Dorothy Cherry danced a solo center stage. Her movement was strikingly expansive, and enticing in the way it was driven by her breath. A syncopation, such as turning fast to stop on a dime, kept me pleasantly wondering what she might offer next.

The group soon came forward to clap, and the audience joined in the applause. This development felt reminiscent of Davis’ discussion about thriving on applause. They all breathed in and out together, and then returned to that “raaawr!” growl. Another soloist, Haley Day, offered a searching but also introspective quality as she moved. She had a clear delicacy, even through the strength in her movement. This joining of opposites kept my eyes firmly fixed on her.

She danced a memorable phrase of stepping forward to then lunge in an opposite direction. On the third time through, the group joined her. All this felt like a mixing of the group and the individual that held a mirror to both, and how they interact. The running water score returned, and the dancers walked off. This looping back to this sound – also emblematic of nature, flow, and harmony – brought a sense of continuity.

There will be always be the individual and the group, the former the building block – the substrate – of the latter. Jacob Regan and Urbanity Dance managed to probe this space, full of complexity and nuance, through aesthetically fascinating dance. I’m curious to see what sort of grand, universal themes they’ll take on next!