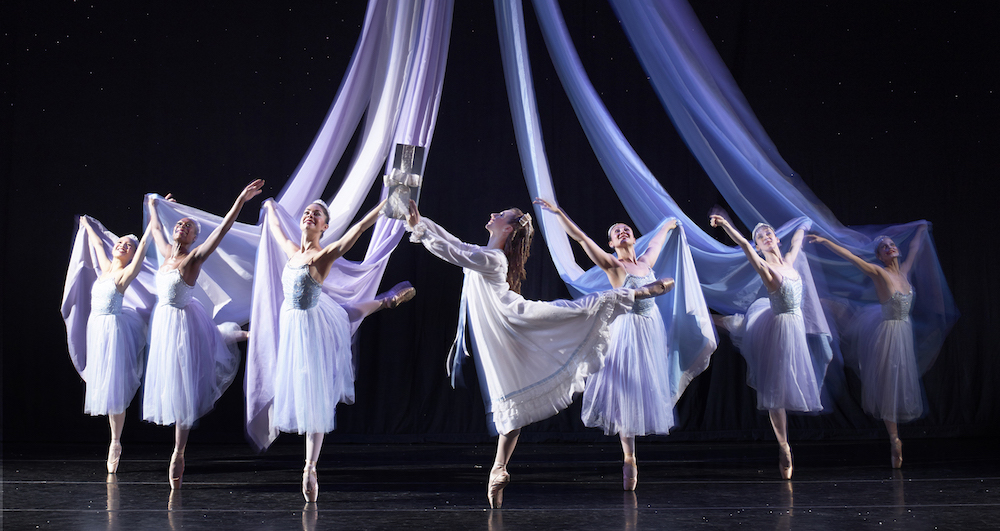 The Nutcracker is inarguably a long-standing holiday tradition around the world. Is it possible for it to become old and “tired”? Is it possible for choreographers and artistic directors to make choices allowing renditions of the classic to be new and fresh while still honoring that long tradition? The first question may remain open for debate, yet José Mateo Ballet Theatre (JMBT)’s The Nutcracker demonstrated that we can answer the second question in the affirmative. This year’s performance mixed things up to create a refreshing and compelling, yet overall familiar, Nutcracker experience.

The show opened as it has for the last few years, in JMBT’s rendition – with dancers in white holding long white streamers falling from the ceiling. Turns, port de bras and formation changes changed the symbolism and aesthetic that these white streamers created – from different sizes of circles, to (seemingly) a grand and sturdy piece of furniture, to a spiral staircase. Clara (Elizabeth Churchill) danced through these shapes, beginning to give the audience a sense of her personality – composed and polite but also curious and adventurous. Churchill’s lightness, yet committed expansiveness through every step helped create that sense of Clara. This opening scene was a visually satisfying and intriguing, as well as quite original, way to open up the show.

Next came Drosselmeyer’s shop, a jungle of enticing color and shape. Drosselmeyer (Jim Banta) tinkered and gathered toys for the upcoming party, offering a sense of appealingly chilly mystery. He then brought out Columbine (Cecilia Zevallos) and Harlequin (Henoch Spinola). The pair offered unique leap and turn variations with the mechanical quality of these dolls, yet the movement still came across as easeful and pleasing. Just as meeting Clara earlier helped us gain a better sense of her as a character, before the main action of the show, this time with these characters helped us to gain a better sense of them. That helped pull me in more as an audience member – possible because of this structural liberty that the performance took.

This structural change didn’t detract from the traditional structure of the performance, however, as we next entered into a fully fleshed-out Party Scene. Classic, elegant ballroom dancing filled the stage, matching the authentically wide hoop skirts of the women. The children’s movement and pantomiming offered unique, intriguing touches, such as intersecting lines and opposing levels between the boy and girl groups, and Clara putting her new Nutcracker doll in a small bassinet. Party guests filed out, and lights went down. Drosselmeyer worked his magic to bring Clara’s Nutcracker doll to life, to be the Nutcracker Prince (Jackson Jirard).

The Christmas tree grew and glistened behind them as Clara and the Nutcracker Prince danced. Aesthetically and energetically, it was all effervescent and magical – without being “over the top”. All throughout, Drosselmeyer maintained a presence – circling around the periphery and sometimes waving and shaping arms to signal initiating magic. Some Nutcracker renditions include the choice of this presence and involvement, yet in this rendition it felt particularly overt – resulting in an escalation of dramatic tension and intrigue. After Clara, the Nutcracker and the soldiers fought off the mice and their leader — the strong, menacing Rat King (Rick Vigo) — snow began to slowly fall.

Snowflake dancers began to cross the stage, and the iconic snow melody took shape to ring through the theater. An innovative, effective element of this Nutcracker’s Snow Scene (called “The Enchanted Forest”) was the inclusion and use of four danseurs (Spencer Doru Keith, Jean Robens Georges, Sabi Varga and Vigo) for partnering and shaping of additional formations; lifts and additional lines (both straight and diagonal) added visual structure and shape, as well as energetic nuance, to the scene. Nothing of Nutcracker tradition was lost through this inclusion – only enhanced, it felt like.

Act II brought us into, along with convention, the Kingdom of the Sweets and Divertissements. Cherubs and Angels (young dancers of the José Mateo Ballet School), along with Attendants (more senior dancers, as after the retiring of Artistic Director José Mateo, the company no longer does an annual season) helped build this peaceful, beautiful world. In the Kingdom of the Sweets, there was a sense of “coming full circle” from the beginning of the performance – with lighting, costumes and movement phrasework very similar to the opening scene.

Divertissements also took their own innovative takes, in the spirit of the overall show.

In Coffee/Arabian, for instance, the ballerina (Magdalena Gyftopoulos) began on stage, and the danseur (Vigo) followed – a change from this variation in many Nutcracker renditions, and aligned with the current cultural atmosphere of (relative) encouragement of female empowerment. This variation often emphasizes extreme flexibility, yet in this show the variation more so offered creative use of space and partnering. The variation’s common sense of intriguing mystery remained, however.

Trepak/Russian, another male/female duet, also had a slightly different focus than the variation usually has – about expansive use of space and softness through complex movement, rather than strikingly virtuosic leaps and turns (although there were those, too). The ballerina (Zevallos) ended en pointe, with the danseur (Doru Keith) on one knee, reflecting the implication of female empowerment present in Trepak/Russian.

Then came Waltz of the Flowers, innovative through movement and formations – yet mostly through costuming. Pink, yellow and purple flower groups (with costumes in those colors, and also with individual cuts) danced in their own groups and together – offering a kaleidoscope of color, like a true chromatic garden of flowers. Dew Drop Fairy (Brittany Bush) also had a unique costume for her role – an elegant, minimalist Empire dress. It matched her clean command of movement.

That overall quality matched the mature, effective understatement (not at the expense of expansiveness of commitment) of the Sugar Plum Fairy (Angie De Wolf) and her Cavalier (Doru Keith). De Wolf in particular offered an enticing musicality, a drawing out of the notes with her movement. The pair’s artistry tied off the show with a neat, satisfying bow. The performance made clear that it’s very possible to make The Nutcracker both fresh and respectful of tradition. As the show is performed time and time again in the modern era, that might be the secret sauce for keeping it truly alive for years to come.