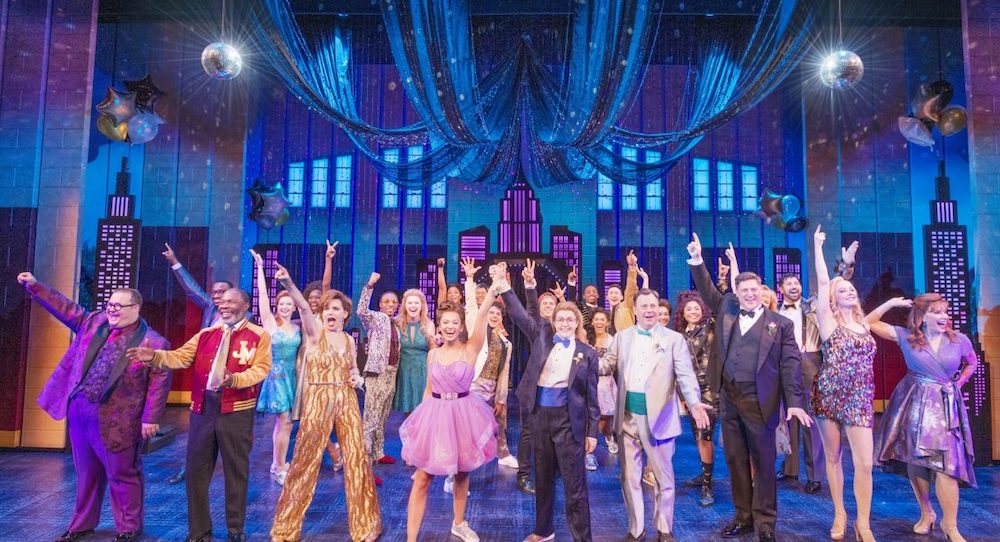 “One thing’s universal: Life’s no dress rehearsal.” That line could literally be every dancer’s personal mantra. But it’s actually a lyric from one of the newest musicals to hit Broadway, The Prom. This production has gotten a lot of buzz for a number of reasons. It is a brand-new musical (i.e. not a revival or a show based on a movie or book), it’s directed and choreographed by Tony winner Casey Nicholaw, it deals with contemporary themes, and it’s a musical comedy (because, let’s be honest, we all could use a little more laughter in our lives right now).

The Prom tells the silly story of four Broadway has-beens who try to rekindle their celebrity status through a little topical publicity. They venture to small-town Indiana to reinstate a high school prom that was shut down to prevent two girls from attending the dance together.

The cast of Broadway’s ‘The Prom’. Photo by Deen van Meer.

Amidst the humor and memorable songs, you’ll find yourself pondering more about this divisive issue. Whatever your beliefs may be, The Prom will make audiences laugh, sing along and hopefully understand one another a little bit better.

Dance Informa got the chance to chat with ensemble dancer Shelby Finnie, who has been with The Prom since its first workshop over three years ago. Finnie, now performing in her Broadway debut, told us about the evolution of this brand-new production and how grateful she is to be involved in this joyful show.

Talk us through your journey with The Prom. What was the initial audition like, and how did the show make its way to Broadway?

“I attended an ECC (Equity Chorus Call) for the ‘untitled prom lab’ in the spring of 2015. We danced (hard!), I sang and read, and then we did it all again for Casey Nicholaw and the rest of the team that same week. I got the call a few days later that I had been cast. It was all pretty quick! After the lab, we were notified that the show was doing an out-of-town tryout at the Alliance Theater in Atlanta, and that they wanted to keep me on board. After that, we really weren’t sure what was going to happen with it. The show was really well received in Atlanta, but it was all a timing thing. It has to be the right season, the right theater. It’s not enough for it to be good; there are so many other factors that go into bringing a completely original show to Broadway. We were all hopeful, of course. Every single person who has worked on this show really believes in it. I’m so very happy that it worked out for us.”

How much of the show has changed since the first workshop? Is it hard to adapt to these changes? 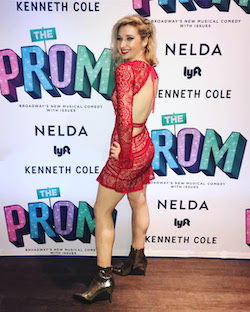 “A lot of the show has changed, especially from that very first lab. But a surprising amount of it has stayed exactly the same. There are some numbers that worked so beautifully from the beginning, and that’s a lot of thanks to our amazing writers. For me personally, though, I think change is exciting! It means the show is growing and evolving for the better. Ultimately, you have to remember that we all have the same goal, and that’s to produce the absolute best version of the show as possible, whatever that means in terms of cuts and changes.”

What does it feel like to be part of such a ground-breaking show that strives to encourage acceptance, understanding and joy, especially in the world we live in today?

“We all have the unique opportunity to work on not only an entertaining and incredibly funny show but an important and relevant one, too. I’ve already seen the effects it’s having on people, and I think it’s going to make a positive impact on a lot more people’s lives. As a performer, you don’t always get that kind of fulfillment. It’s really special.”

Still, The Prom is a controversial show. How do you/the cast deal with the hate the show has received?

“We acknowledge it and then just continue on with our work. If anything, it just validates why this show is needed right now. I think any push back is important for people to see, because it means that although our world has come a long way in terms of love and acceptance, there’s still a long way to go. Sometimes living in the bubble of NYC, we forget that.”

How do you prepare for your show every night? How do you keep yourself healthy and strong while performing eight shows a week?

“I usually get to the theater about an hour-and-a-half before the show. I do about 30 minutes of warming up, usually a ballet barre followed by some plyometric work to get my heart rate up. Ballet class, for me, is like hitting the reset button, so that plays a huge part in keeping everything in alignment. I am also an instructor at Body by Simone (a dance cardio-based fitness studio in Chelsea), and that keeps my endurance and overall strength up. The show itself is really physically challenging, so sometimes working out on top of eight shows a week proves to be a struggle. But with all the high-energy dancing, cross-training is essential to staying injury-free.”

Casey Nicholaw has four shows currently running on Broadway (also Mean Girls, Aladdin and The Book of Mormon). Why do you think his work is so popular with audiences? 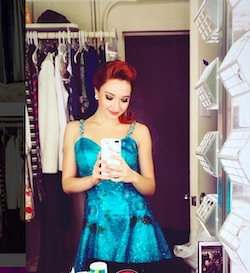 “He’s a comedy genius. He has an eye and ear for it, and he knows audiences. I also admire how he can keep comedy rooted in truth, no matter how outrageous it may get. Also, he never choreographs steps just for steps sake. The intention and the storytelling are always most important. I think that really comes across in every show he does. He started on the stage after all, so he sees and understands all sides.”

What’s the hardest part about being on Broadway? What’s the most exciting part?

“Right now, the stamina is proving to be the hardest part. Dancing full out and staying completely present and honest in my intentions for eight shows a week can be difficult. It is extremely fulfilling, though, and that’s what matters more! I’d say the most exciting thing is that I get to dance every night for my job. I became a performer because I love the stage, because nothing feels more right to me. Broadway was always a big dream of mine. It’s exciting that I get to live it out eight times a week.”

Why should audiences come to see The Prom?

“Because it’s loads of fun, it has a ton of heart, and because you’ll laugh, a lot.”

For more information about The Prom and to order tickets, visit www.theprommusical.com.