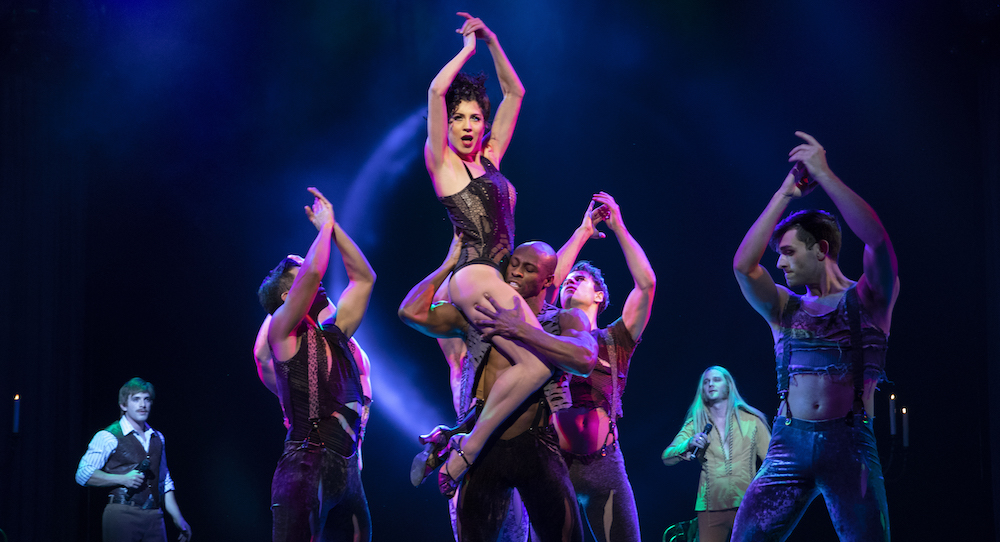 I was very excited for this musical. Even if you’re not a Cher fan, you can’t deny respect to a diva who has reinvented herself and stayed relevant for over 55 years in show business. I’m in my 20s, so I didn’t experience Cher of “Sonny and Cher” or The Cher Show on television. But I did know her in movies like Burlesque and Mamma Mia 2 and from her popular (and very autotuned) dance tracks that are always the hit of the wedding dance floor and at karaoke bars. Despite mixed reviews during its Chicago out-of-town try-out, I was eager to see The Cher Show on Broadway to learn about and celebrate this icon who has continued to remain a star of pop culture for over half a century. 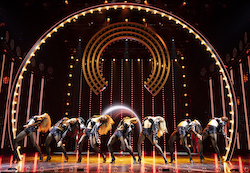 The cast of ‘The Cher Show’ on Broadway. Photo by Joan Marcus.

When The Cher Show opens, we meet the three Chers — the Babe, the Lady and the Star — who each represent Cher at different points in her lifetime. We saw this trifecta acting in Summer, and similarly, the Chers interact with one another…Cher present, past, and future chiming in on every big life moment.

The Cher Show acknowledges the complexity of Cher through the three Chers, but the actual character of Cher herself is surprisingly surface. Young Cher is shy and uncomfortable in her skin, but instead of exploring her transformation to becoming a pop star singing proudly about her mixed race and dressed in tiny but elaborate get-ups, Cher #2 is swapped in to fast-forward us through the sticky stuff and distract us with the next hit song and flashy outfit. While the sets, costumes and lights are “showy,” the book itself is not…telling rather than “showing” you.

We can watch Cher’s movies, tours and television episodes on YouTube, with the real Cher singing and performing. And if we were looking to just sing along to our favorite Cher hits, we could pay less for a ticket (and more for bottomless mimosas) at a drag brunch. Don’t get me wrong…the talent on the stage is spectacular. I suppose in suggesting this I was hoping that the production would be more of what a Broadway theatre is built for — something a little grittier, a little more intimate and a little more artistic. 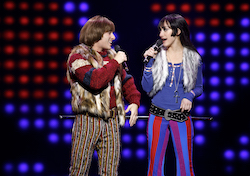 Jarrod Spector as Sonny Bono and Micaela Diamon as Babe in ‘The Cher Show’ on Broadway. Photo by Joan Marcus.

Granted, condensing the life and career of Cher into two-and-a-half hours with an intermission is no easy feat. And the biographical juke-box musical is a fairly tried-and-true structure (I’m thinking of Jersey Boys, Beautiful, On Your Feet). So, a few other questions came to mind after watching The Cher Show. 1) What is the line that distinguishes acting from impersonation? 2) Can a costume designer win an award for his outfits on Broadway when those very designs were created long before/not specifically for this production? 3) What is the potential for putting these jukebox biographies on the Broadway stage? How can they be more than a movie, a concert or a live act anywhere else? 4) If biographical names and actual songs are used in these types of musicals, shouldn’t the corresponding choreography (from music videos, concerts) be used as well? And, regardless of whether it’s actual choreographic reconstruction or simply inspired by the original dancing, shouldn’t those original choreographers be recognized, too?

Chris Gattelli’s dancing (clearly inspired by and adapted from Cher’s original dancing) was fun and topical and served the story in its way. The best number in the show, as other reviews have already noted, is “Dark Lady”, danced by Ashley Blair Fitzgerald and the entire male ensemble. The piece is an entire production number of intricate partnering, storytelling and power. But while I was mesmerized, I didn’t understand the point it served in the show, especially since the other choreography was more “background” and realistic (i.e. it makes sense that there would be dancing in Las Vegas or on Cher’s Come Fly Away or Dancin’. Despite the fact that the dance seems somewhat out of place, it’s stunning and well worth the price of admission. 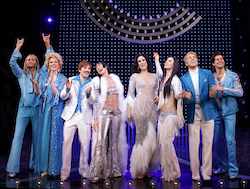 The Cast of ‘The Cher Show’ on Broadway. Photo by Joan Marcus.

However, if a musical is focusing on a pop star, Motown group, or rock ‘n’ roll concert, the choreography has to work harder than simply replicating the dancing of the time period. To be really effective, it has to be carefully designed for the Broadway stage. If a ’60s band performed on The Ed Sullivan Show, the actors portraying that band need to move differently than if they were dancing for a camera (with the capability of shooting and cutting to various angles). If a pop star like Cher sold out concert arenas across the globe, the same back-up dancing on Broadway doesn’t empower the scene because there’s no pyrotechnics, the audience isn’t crowded and dancing on their feet. I make this point not to condemn the choreography of juke box musicals but to recognize that choreography on Broadway can have a little more creative license to experiment with getting the same “feel” but without simply cutting-and-pasting dancing from a different setting. 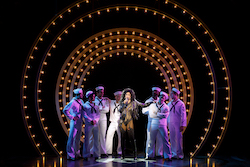 Stephanie J. Block as Star and the cast of ‘The Cher Show’ on Broadway. Photo by Joan Marcus.

Gattelli did something inventive with the finale, “Cher Megamix”, by inviting a number of up-and-coming choreographers (Martha Nichols, Karla Garcia, John Rua, Nick Kenkel, Olivia Cipolla and Grady McLeod Bowman) to each choreograph a different section. This was an exciting idea, except for the fact that I didn’t know about the choreographic mash-up until researching the show after I saw it. Perhaps that’s a success because all the vignettes blended together well. But maybe I didn’t notice enough of an individual voice in each segment either. I found the listing of these names in very small type on one of the last pages of “who’s who” in the cast to be misleading. This was a cool idea, and I would have loved to see it better acknowledged.

Did I sing along and have a good time at The Cher Show on Broadway? Definitely. But it left me wanting more. Recently, Cher tweeted that she has a biographical book and movie in the works for 2020. So maybe The Cher Show is just a strategic teaser of what’s yet to come…