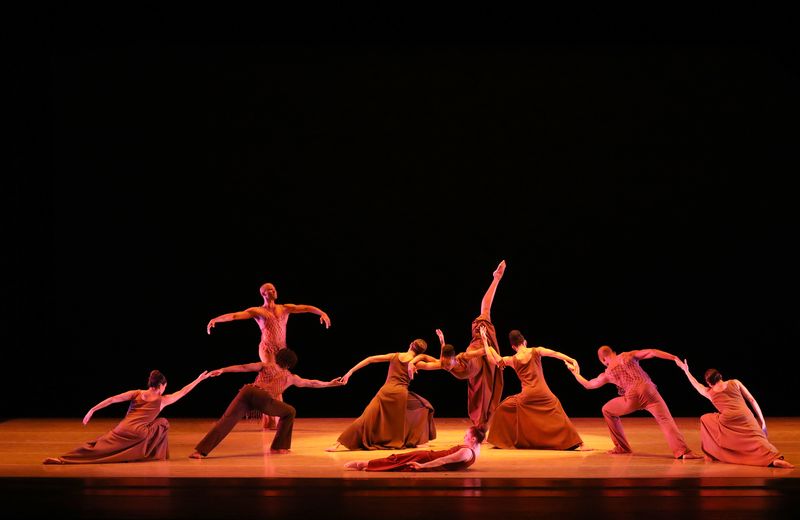 Dance as an art form owes a lot to legacy – the gifts of artists to future artists and the direction of the art form itself. Few American dance artists have left a more significant legacy than Alvin Ailey. The dance company that is his namesake, and a big part of that legacy, Alvin Ailey American Dance Theater, is commemorating the man and his legacy in this year’s New York City Center season. Given that it’s the company’s 60th anniversary season, this focus feels quite apropos. 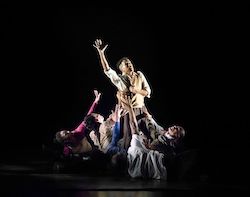 Rennie Harris’ work, Lazarus, although quite unique and innovative, reflected the spirit and soul of Ailey’s work. The work began with dancers crawling on, low in space and the lighting also low. Humming reminiscent of Gospel spirituals rang through the theater to accompany these dancers. That alternated with the sounds of crying. “I can taste of the air and cry,” said the voiceover, raising the idea that even negative emotion can hold beauty, because at least it is being alive and feeling. Striking shadows across the stage (lighting by James Clotfelter) added to the mystery and vague sense of unease.

A powerful solo commenced from there, the soloist sometimes dancing low and sometimes offering acrobatic movement (such as a handstand on one hand flipping into a seat). Other movement was gestural and minimal, conveying that the body’s natural action is enough. The group re-entered to make staggered lines within a clump, and executed hip-hop inspired movement (consistent with Harris’s background and typical choreographic signature) – hips swiveling and popping, feet ball-changing and “crip-walking” (opening and closing together, on one toe and the other heel). They made “cactus”-shaped arms (hands right over wide elbows) and raised hearts up to the sky. “Alleliua” sang the score as they did so. All effects combined were spellbinding for the eyes, the heart, and the mind. 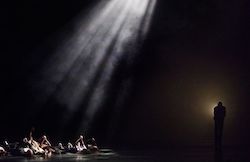 Musical beats intensified and sped up. Along with this shift, movement became faster and more grounded. Keeping weight low, as well as spinal undulations and syncopated rhythms in movement, reminisced traditional African dance now more than hip-hop dance. The group dispersed as lights went down. The lights again arose on a larger group in a trapezoid shape. Simple, repeated footwork became meditative and conveyed self-assurance. This perfectly matched the score singing over and over “I’m a Black man in a white glove!” Movement became more expansive and virtuosic with leaps and turns in parallel attitude. Individual dancers began to riff off the collective movement and find their own movement. A harmony remained, however. There grew a sense of social cohesion amongst even independent, autonomous individuals. All combined, Harris was offering in the piece a smorgasbord of sound and movement.

Chillingly, voiceover referenced slavery – “the music of the lash….[a] psychopathic melody.” The speaker also spoke of “thoughts allowing rebellion to grow,” however. Lighting faded again so shadows returned, and dancers moved slowly off stage – in the same way they had entered, crouching low in space and moving with a weighted quality. It was if they were all Axis with the world on their shoulders. Lights faded down and the curtain. Yet I was left thinking of this second “Lazarus” – those who rose again after the dehumanizing force of slavery.

Ending the night was Ailey’s iconic work, Revelations. Use of score and elements of movement quality were intriguing connecting threads between this work and Lazarus. Structural differences were also clear, however. Every section in Revelations had a Gospel hymn as a driving force, as well as a crisp and clean (and therefore satisfying and memorable) ending. The first of these sections was “Pilgrim of Sorrow”, dancers beginning in a triangle formation. Gazing upward in a slight backbend, combined with the nuances of the music and shadows in the lighting, brought a spiritual feeling. Their unison port de bras phrasework, including arms in a circular path to end with elbows raised and hands down – evoking birds’ wings, was captivating. They ended in this formation, in a way that was memorable, striking, and soul-stirring. It set the standard for similar endings to come. 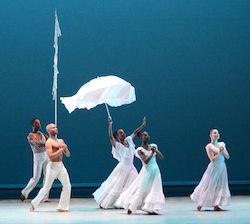 “There’s trouble all over this world,” rang out the next song. The movement in this song reminisced the inhale and exhale of everyday breath – with falling in space and recovering from that fall, and formations moving inwards and outwards in a rhythm. A following trio offered that same sense of opening and closing. At the same time, spiraling and rippling movement allowed for individuality. Complex leaps and turns opened up space for each of the dancers to demonstrate their own unique artistry through the virtuosic challenges. A collective harmony remained, however. “Didn’t my Lord deliver Daniel?” sang the score, a sentiment holding both the individual and collective. To end, they knelt and raised an arm up. This brought a feeling of raising spirits in hope. The crisp, clean timing and shape of the tableau made it an ending just like any other in the piece – whole, complete, accessible, and satisfying.

A lovely pas de deux followed, “Fix Me Jesus” danced by Ghrai DeVore and Jamar Roberts. There was clearly a connection of soul between them, yet it felt less overtly romantic and more about reaching towards a higher power together. Through impressive phrases such as DeVore taking an arabesque, pirouetting and then falling forward to have Roberts catch her, their mutual trust and understanding were clear. Also clear, and intriguing, were oppositional energies in between them – moving apart and then together, a push and a pull.

Soon came a larger group section that was more joyful and uplifting, despite the weighted reality of the history behind the song; through the Spiritual classic “Wade in the Water”, shimmering blue and white streamers were held to span the width of the stage emulated water, and dancers moved across the stage to emulate those moving through the water on the journey to freedom. It all felt, big, bold, and beautiful – even if referencing a sordid past (though also with stories of hope and redemption within that past). 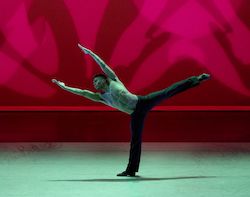 Revelations ended with several larger group songs within “Move, Members, Move”, a section with bright yellow costumes underscoring the sunny joy of the movement (costumes for this section redesigned by Barbara Forbes). Dancers were split into lines of men and women, and alternated standing upstage (or downstage). African dance influences of groundedness and syncopation in rhythm were clear, but so were jazzy signatures such as linear port de bras and “pencil turns”. The choreography seamlessly melded these elements, to make something quite unique and quite beautiful.

All in all, the work is a masterclass in choreography, delivered commendably in this performance by the current Ailey company. Every moment was so rich, yet also so clear. In juxtaposition with Lazarus, one could see elements of legacy that have carried through – yet also divergent elements of more contemporary dance (such as a movement quality more fluid and less definable through individual steps and movements). One could also associate the tone and aesthetic with the psychology of predominant African American experience at the time of creation. Through the years, the art has shifted, with some elements carried through from treasured predecessors – yet its potential power has remained.