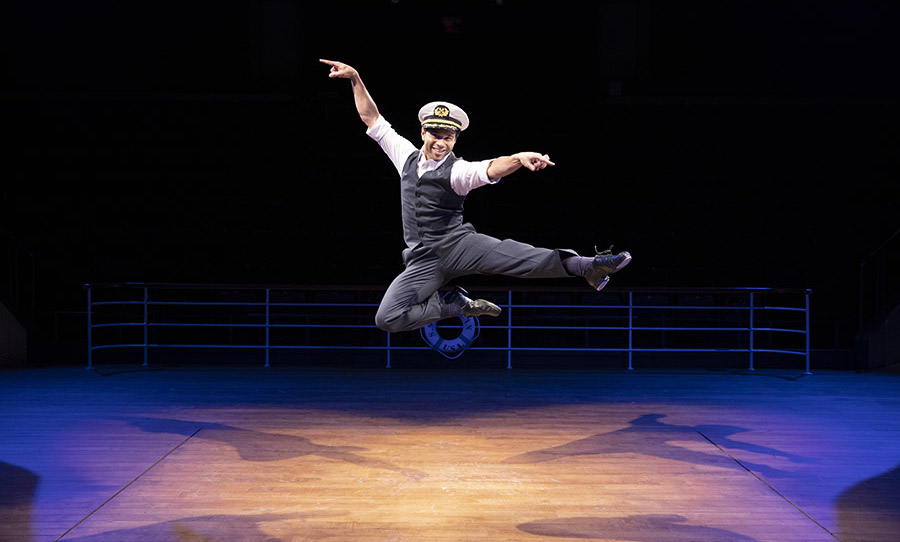 Last night, I had the chance to see Arena Stage’s production of Anything Goes at the Mead Center in Washington, D.C., and I have been humming the title tune and fighting the urge to break into time steps ever since. Best known for its Cole Porter score and big dance numbers, Anything Goes is part love story and part buddy comedy, set entirely on a luxury ocean liner circa 1934. To be honest, I had always considered the show to be a bit of fluff piece, mostly a showcase for hit songs and and those divine bias-cut 1930s evening gowns. Costume designer Alejo Vietti definitely delivered on the stunning evening wear front as expected, but I was surprised at how Arena’s Artistic Director Molly Smith managed to draw out the richness of the darker material in the show — the references to suicide, celebrity worship and financial hardship — that have seemed glossed over to me in the past. For audiences looking for a feel-good holiday season show, I am happy to report there are plenty of big laughs, lots of gorgeous dancing and some seriously bedazzled frocks. Yet, under that shiny veneer, there is a plenty of satire to feast upon if you are so inclined. 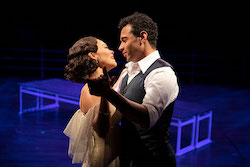 Lisa Helmi Johanson and Corbin Bleu in ‘Anything Goes’. Photo by Maria Baranova.

Cleverly staged in the round, the cast of about 20, including a real life pooch, are kept in near constant motion, working the audience from every angle and constantly shifting to prevent weighing the action too heavily in any one direction. Much to the credit of choreographer Parker Esse, the performers move in and out of dance numbers so seamlessly that it is sometimes hard to detect where the dancing with a capital “D” begins. Esse makes the famous tap spectacle of the title song “Anything Goes” uniquely his own, expertly working the spiraling formation changes demanded by theater-in-the-round and adding even more excitement and drama to the scene. Throughout the show, the choreography works beautifully with Ken MacDonald’s set design; the use of two mobile staircases to create a vertical chase scene in the second act was one of the most memorable parts of the show. Choreographing a classic Broadway-style musical in the round is no easy feat, but Esse makes it look so effortless and fun that I will definitely try to catch his next show at Arena.

The whole cast was a delight; the bevy of supporting roles were played with convincing physicality and solid comedic timing. In a cast full of triple threats, Corbin Bleu as Billy Crocker and Soara-Joye Ross as Reno Sweeney were still stand-out talents. Bleu brings a tremendous warmth and charm to the role, never over-acting even in ridiculous scenarios, and the guy can really dance. Every time he tossed off a complicated turn or trick jump, I marveled at the easy, casual elegance of his movements. Of course, Ross has a huge voice and major sex appeal as Reno Sweeney, but she is also a very capable dancer and a great comedian. To my surprise, one of my favorite choreographic moments in the show turned out to be the duet “You’re the Top” performed by Bleu and Ross. While the tune is famous, the lyrics can seem just repetitive and nonsensical after the second verse, but Bleu and Ross were having so much fun with this number that I fell in love with it. Esse’s choreography also does some heavy lifting here, mixing exaggerated gestures with sight gags and lush dancing to add interest to the dense text. 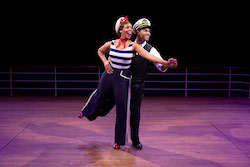 Soara-Joye Ross and Corbin Bleu in ‘Anything Goes’. Photo by Maria Baranova.

With most of the famous Porter tunes front-loaded in first half, the second act of the show can feel like an after-thought, especially since the plot devices that deliver the “happy ending” are quite predictable. That said, I found the beginning of the second act simultaneously mesmerizing and unsettling. A church choir style number, “Public Enemy Number One”, opens Act Two with the full cast serenading Crocker and his criminal buddy, Moonfaced Martin, for the devious actions attributed to them. Due to a phony passport, the ship Captain believes Crocker is a dangerous criminal, and Crocker is surprised to find that being “Public Enemy Number One” gets him a lobster dinner whereas admitting to being a poor stowaway would get him thrown in the brig. Even in the midst of a lot of silliness, Anything Goes reminds us that our culture has been rewarding the rich for behaving badly while shaming the poor well before the dawn of reality television and social media stardom.

When the show gets back to the business of a happy ending, Crocker’s charm, persistence and good fortune prove enough to overcome the barriers of money and class which threatened to keep him from marrying his debutante sweetheart. At the same time, the crazy lengths to which he has to go to realize his fairytale ending betrays the reality of just how hard it is to get ahead when you start out behind in life. But, of course, all is well that ends well when you’re in a classic American musical, so the show closes will a slam-bang finish complete with a triple wedding and another round of stunning gowns. Life may not be fair, but at least it is more fun when you’re tapping your feet to a great Cole Porter tune. The show runs through December 23, so D.C. area locals and visitors have a few more weeks to catch Bleu and crew before this ship sails off into the sunset.