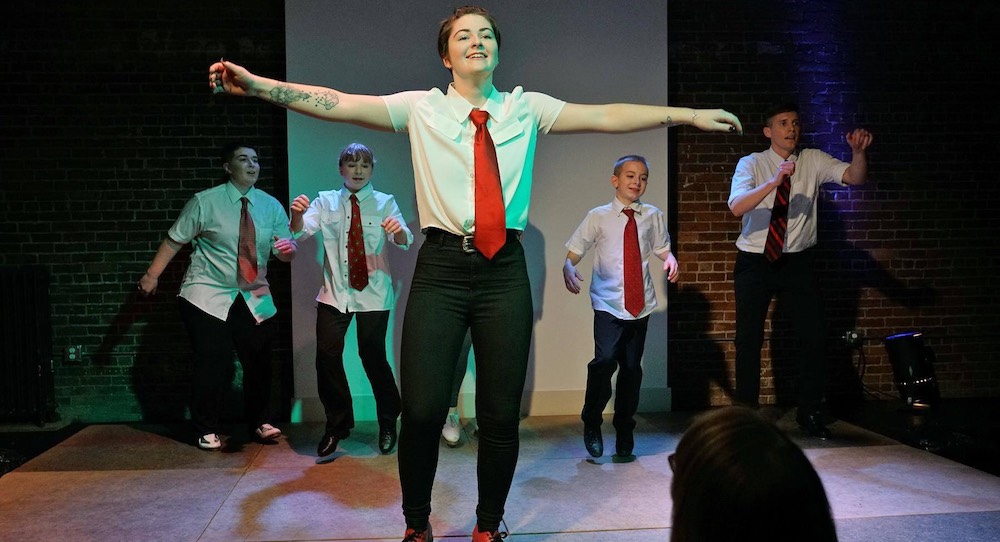 My only thought or expectation heading into this show is that I don’t often view tap, and I was looking forward to the opportunity of doing so. I didn’t fully anticipate the pure joy, and pleasure in technical virtuosity, that I’d experience – that dance, and tap dance in particular, can conjure. In line with this ethos, Touché Taps’s Facebook page states, “Our motto is simple. Teach Peace. Teach Love. Teach TAP.” In the program, Artistic Director Shaina Schwartz shared that she intends for 4 On The Floor to be a recurring show featuring works from Boston and Greater New England’s percussive dancers. “There are more tap companies in Boston than you know…[and] I am hoping to create a new avenue here, where we need one,” she explained. The show offered a diversity of percussive dance styles, all well constructed and performed as well as full of joy – thus putting forth a commendable representation of local tap dance. 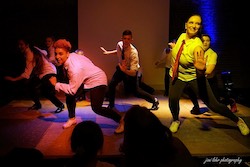 Touché Taps’s ‘4 on the Floor’. Photo by Joni Lohr Photography.

The show kicked off with “Muevas Los Huesos”, a shmorgishborg of sound and color. Dancers began filing in through the back with a phrase of accented shuffling and stomping, the group gradually growing larger. Lighting (by Rick Brooks) and costumes were in a tropical color palette – oranges, pinks, yellows and light greens. Collared shirts brought a classy feel, but shirts were individualized and some casual (such as one dancer wearing a sleeveless one). The Latin music (from Dirty Dozen, Big Phat Band and Magnus Lindgren, with sound design by Mateo Gold) complimented this color palette. The group soon smoothly split into two rows, one upstage and one farther downstage. Schwartz’s choreography effectively incorporated the upper body, with arms placed in Latin dance styling and the torso rolling. Even with this lift of the upper body, footwork stayed noticeably grounded in a Rhythm Tap style.

Lighting soon slightly darkened to bring the feel of day moving into night, and all enjoying a Latin dance club late in the evening. A circle formation brought smooth sounds and a sense of cyclical harmony. The music then slowed, a solo saxophone leading the melody, and lighting darkened further. A syncopated variation on the shuffle stomp phrase from the beginning of the piece traveled the dancers around the space. Flexed feet and jazz fourth position arms created shape that reinforced the overall classic, classy feel of the work. A soloist, Alycia Miner, finished off the piece, truly representing its overall balance of lively fun and classy control.

“Watermelon Man” brought in the Touché Teens. One might reflexively expect this group to be less advanced and the choreography less difficult than the main company, but that was very much not the case; impressively, the steps were just as fast and technical, and tap sounds just as clean, as those of the prior piece. Step, quick shuffles, and a stomp was a framing motif for many sequences. There was a shimmy feel in their hip movements as well, adding a compelling stylizing. Costumes and lighting in summer greens and dark pink connected with the piece’s watermelon title and song, and summer blues and yellows in costumes reinforced the theme. Ryan Casey of Off Beat Tap entered, and a call-and-response (with improvised additions) began. The Touché Teens exited, while Casey remained onstage. This was an intriguing arc – from a group, to a soloist with a group, to the group exiting for the soloist to stay onstage.

Two other tappers from Off Beat Tap joined Casey as the iconic “It’s Your Thing” rang out. Cleverly, the piece was called “It’s Our Thing”. Costumes were solid-colored slacks and floral shirts – something relaxed, yet also classy. They moved into a triangle formation, and soon enough into another kind of triangle – one soloist tapping downstage center and the two other dancers walking back and forth upstage, from stage left to stage right and back again. The dancers at upstage looked forwards to the soloist, like good audience members. They switched places until all dancers had their solo opportunities. Their tap beats were right in time with the musical beats, yet at the same time there was a true lightness and joy to their performance. 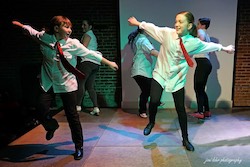 Touché Taps’s ‘4 on the Floor’. Photo by Joni Lohr Photography.

A short silent section offered effective contrast to when the dancers subsequently picked up speed, dancing a bit more “into the floor” Rhythm Tap-style. Claps added additional percussion. At other times, arms were placed or simply followed the body’s flow with the speedy footwork. Their rhythms were infectious. Towards the end the tappers moved into a diagonal line from downstage right to upstage left. Tapped rhythms became all the more compelling through speeding up a bit further and becoming more syncopated. They ended posed with huge smiles. They very much “did their thing”, and it was wonderful to experience.

After a couple of other similarly joyful and unique pieces from Touché Taps and Touché Teens, Touché Taps kicked off the last piece – “4 On the Floor, Round 1”.  Schwartz, as a soloist, began with tapping in à capella, first in varied rhythms and then into a more consistent one. A second dancer joined with a slightly different rhythm, yet – very compellingly – their rhythms blended until they did something together that blended what they both had been doing. Their rhythm slightly shifted again with the addition of a third tapper. A gesture of throwing arms to the side added to an overall sense of relaxed nonchalance. In another memorable moment, they clapped right on beat together. There was a lovely sense of collaboration. With a fourth dancer joining, they picked up speed. “Sorry, sorry, I just get so excited,” one said in a rhythmic speech, and they slowed down. The audience laughed at this tongue-in-cheek “meta” commentary (the art discussing itself). Speed built back up, and they moved to a line. After tapping some clean, fast rhythms, and more “meta” rhythmic speech, two Touché Teens entered with a duet.

The whole group then danced together, repeating and varying earlier rhythms and doing that gesture of throwing arms to the side. The stage was completely full and completely alive with rhythm and pure joy. The cast came to circle the stage while facing outwards, to then face all audience members on three sides of the stage. They snapped and clapped, and still tapped. The rhythms were again fully infectious, and I wanted to get up and dance with them. Eventually the dancers came to raise one arm up and bow. They fully deserved the audience’s raucous cheers and boisterous applause. The show was a wonderful representation of the voice of Boston and Greater New England’s tap scene. It made a space for that representation where it previously didn’t exist. For the energy, for the joy, for the impressive virtuosity, I – and I’m sure most in the audience – are so very glad that it did.