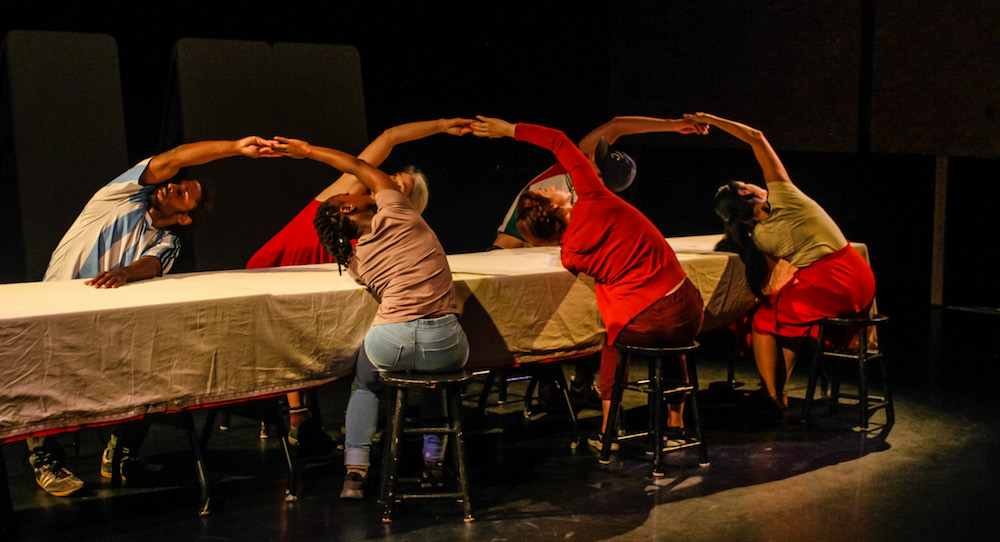 How do you react when you’re faced with something unexpected? How do you react when you are challenged to confront something difficult, something painful, something that can feel hopeless? From the very start, Silvana Cardell’s Supper, People on the Move did both. The work began with cast members guiding audience members through a mock immigration process, in both Spanish and English. Bright lights, security cameras and black walls made the experience viscerally real.

From there, athleticism, inventive use of props and compelling theatricality painted an abstract picture of very real phenomena that are both current and timeless – forced migration and immigration. Audience members sat around the stage in folding chairs, allowing a more immersive experience than they could have had sitting before a proscenium stage. 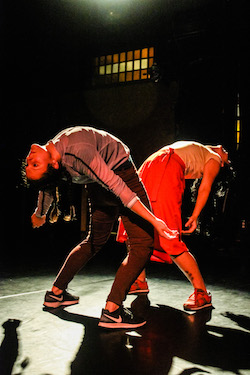 ‘Supper, People on the Move’. Photo by Pedro Cruz Photography.

The stage action (apart from the beginning action) began with dancers walking in one by one to a sit at a long table. They offered a phrase of opening and closing circles created by holding hands and their arms, from there forming arcs. A sense of unity and harmony was in the air. One by one, they walked away. One dancer remained to fold up the long, red tablecloth, moving calmly and unhurried. In a flash, music escalated, lights went down, and she frenetically turned.

All of this emulated a storm. The calm to the storm could be said to mirror going from the normalcy of life in one place to the unpredictability of life in another. Another evocative section soon followed. At upstage right, doors opened to have one dancer jump out, along with a bundle in a plastic bag. A bright light shone from behind the doors, and two unseen people yelled “go, go, go, go!” This was repeated over and over. It seems hard to imagine a way that becoming a refugee could be more powerfully, evocatively conveyed in theatrical dance.

A section not long after was also powerful through its clarity and simplicity. A dancer balanced a single piece of paper on her hand, moving to and fro – skidding, sliding, lunging, rising, falling – with intense focus on the paper. All of the sudden, two other dancers pulled her off stage, her paper landing on the ground and left behind, no longer in her possession. Just as in the life of a person seeking citizenship in a new land, so much can hinge on a single document – and in one fateful moment, the influence of that single piece of paper can change.

Later, two dancers almost fully disrobed this same dancer (undergarments remaining), pulling her shirt and pants off in different directions. She then ran off, both urgency and fear in her body. This moment, arguably quite importantly, was a reminder of the sexual violence present in the vulnerable situations involving migration and immigration – something omnipresent in society at large, but all the more so with the factors of marginalization and lack of protective law enforcement at play.

Continuing on with those papers, in another following section that same dancer spread more papers all over the stage. In informal post-show chatting, the choreographer explained that those were actually her papers from visa applications. Knowing this might have perhaps made the following section all the more powerful. One dancer spread what looked like coffee grounds over the papers, as another poured water from a pitcher on the ground while executing a deep standing backbend. The meaning here could be coffee to power through late nights doing immigration paperwork, water holding the life needed to do so, and backbending as the personal strain that is central to it all.

Following was a duet full of expansive, acrobatic movement – less clearly applicable than other sections towards the meaning of the work, yet viscerally powerful and physically impressive all the same. The tables then seemed to have more of a role. They evoked barriers – potentially those in space, in the law, in borders, and more. Dancers stacked them against one wall, and executed variations on dancers trying to rise to the top of these tables (and sometimes succeeding) – sometimes alone, and sometimes with help. Athletic, acrobatic feats added visual pleasure and amazement to it all. 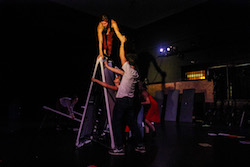 ‘Supper, People on the Move’. Photo by Pedro Cruz Photography.

Later, the dancers set up the tables in center stage, standing vertically, with further inventive variations in a group and individually. At one point, they snaked through small spaces between the tables. As another, the dancers created the illusion of one of them dancing horizontally across the top of the tops of the (vertically standing) tables – one holding below her hips and another below her shoulders, as she pedaled her legs in a stylized walking motion. Like much else in the piece, visual and energetic intrigue met strong, emotionally significant meaning to offer something memorable and powerful.

The dancers then set the tables into cafeteria-style formation. Two called audience members, one by one, to sit at these tables. They carried with them a bundle of food and a water bottle. When all were seated, the dancers calling audience members to the tables welcomed them to “dinner”. One cast member sat with each table, and explained that the bundles of food and water represented the bundles of food one that one town in Mexico has offered to migrants traveling through from Central and South America. The dancers then began discussion on audience members’ experiences with immigration.

Audience members likely didn’t expect to discuss such personal, perhaps difficult histories at this dance performance. Yet all shared together, over food, it was a safe space in which to confront these histories – and how they relate to current affairs. Doing so is arguably necessary for moving forward to a more highly-functioning, more compassionate world. Art of the unexpected, and which causes audiences to confront vital truths – such as Supper, People on the Move – can have those sorts of effects. That is, if created, and if audiences fully engage.